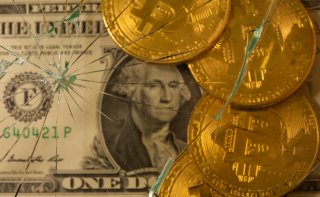 Perhaps ironically, it is where the world-first revolution began. Also above the door, the sign “Bitcoin Beach” is unmistakable—and inside sit the surfers who started the revolutionary movement.

In June, El Salvadore’s Legislative Assembly passed President Nayib Bukele’s “Bitcoin Law”—making the small, 6.4 million populated Central American nation the first in the world to declare a cryptocurrency a legal tender. The news immediately sent the volatile Bitcoin (BTC) ascending some 11.98 percent to more than $37,000, with the law mandating that “every economic agent must accept bitcoin as payment when offered to him by whoever acquires a good or service.”

“Years ago. it was very difficult to change dollars into Bitcoin, but that has all changed. We have created a real secular economy here, and the president sees that success,” said Jorge Alberto, thirty-two, one of the founders of his country's “Bitcoin Beach” movement. “It used to be that we had no good tools here except for the waves. Now, the young people can get educated and are starting all kinds of small businesses.”

In recent years, the once deeply destitute El Zonte was a dot on a map known only to local and adventurous surfers who dare brave the robust tropical waves set by volcanic ash and rocks along the shorelines. But with the advent of crypto, a slow international swell of wellness gurus, gastro mavens and sustainable hotels has given rise to the growing fame of the now dubbed “Bitcoin Beach.”

Today, local women sell sliced fruit through the cobble paths—accepting Bitcoin and the U.S. dollar, which El Salvador switched to from colones in 2001—and ATMs have been installed for crypto-only transfers. Bukele has urged the rest of the nation to look to the beach hamlet for economic inspiration, given that Bitcoin has become ingratiated into daily life and is said to have helped many keep their families afloat throughout the financially guttering coronavirus lockdowns.

But the move has much of the international community concerned, especially regarding the impact on transnational organized crime.

The prominent Mara Salvatrucha gang, better known as MS-13 and rival 18th Street, dominates much of the urban and remote landscape. Some analysts have thus bemoaned that Bitcoin will only ease the group's ability to move money from Central America to the United States, sending remittances to and from without fees or detection.

The International Monetary Fund (IMF) has lamented that the Bitcoin enactment “raises a number of macroeconomic, financial and legal issues.” At the same time, the World Bank rebuffed San Salvador’s request for assistance in transferring to the new legal tender. Victoria Nuland, the U.S. State Department’s undersecretary of state for political affairs, has vowed that Washington is taking a “tough look at Bitcoin” and cautioned Bukele to ensure that the decentralized currency is “well-regulated.”

The United States also recently named fourteen Salvadorans inside Bukele’s circle as “undemocratic” and “corrupt” actors, sparking speculation that the cryptocurrency further fosters corruption from the top. Transparency International ranked El Salvador 104 out of 180 countries on its 2020 corruption index.

In addition, reaching all parcels of the country could prove to be a steep challenge.

El Salvador is second only to neighboring Honduras when it comes to internet access of all twenty Latin America and Caribbean countries, with less than half the country connected and only 10 percent in remote regions, according to a 2020 study by Microsoft and the Interamerican Development Bank.

Furthermore, the Global Findex Database surmises that just 30.4 percent of El Salvadorans even have a bank account, with the remaining 70 percent operating in cash exchanges outside the system. Some economists also fear that the move could trigger a total collapse of the economy and inevitably become entangled in the crosshairs of the Financial Action Task Force (FATF), which was established by the G7 Summit. Critics have stressed that the rolling out of Bitcoin is an authoritarian maneuver of a right-leaning president that will enable foreign crypto entrepreneurs to evade the IRS, pave the way for human traffickers to receive funds from the United States, and thus spark a broader and even more exploitive border crisis.

“It is too soon to tell whether it will facilitate criminal activity in El Salvador, but there is a high risk that will occur,” noted Kenneth Rijock, a longtime compliance and financial crimes consultant. “(But) Bitcoin in its present form is not backed by anything of value, and therefore it remains highly speculative. Whether it will stabilize enough to permit legitimate commerce over time is not yet known. It does have interesting possibilities, but it requires regulation and control to be considered safe.”

However, the likes of Alberto contend that just the opposite is already evident—and the pluses far outweigh any speculative negatives.

“I started with Bitcoin years ago to help young people go to school, so they wouldn't need to go to the U.S. border,” he stressed. “And the problem with laundering for a long time has been in U.S. dollars, so why is it suddenly different now?”

Alberto also pointed out that gangs still almost always do their dealings exclusively off-the-grid in cash and that Bitcoin is more transparent when uploaded to the blockchain. And according to Norbert Michel, the director for the Center for Data Analysis, cash—paper U.S. dollars—is still the primary currency choice for most criminals.

Most importantly, the deployment of Bitcoin offers El Salvadorans financial freedom for the developing country. As Alberto highlighted, Bitcoin is there in supplement to the dollar and not to replace it.

“If these crypto-assets are beneficial, people will use them. If they are not, people will not use them. So the fact that a country is providing clear legal options for people to use the payment methods of their choice, rather than force upon them on the single currency, is definitely a positive step,” Michel surmised. “Other countries should, at the very least, follow that principle and provide equal tax and regulatory treatment for multiple means of payment.”

After the dollarization, the country fast became submerged in hefty loans and external controls. In addition, remittances account for around 23 percent of the country’s gross domestic product. As a result, hundreds of thousands of already struggling lose out in transfer fees when money is sent from abroad to El Salvador.

The trajectory was sparked more than fifteen years ago when Californian surfer Mike Peterson came to town—not only for the waves but on a missionary expedition to aid the neighborhood, wracked not only by poverty but few economic opportunities and heavy gang recruitment and violence.

“Mike took an interest in me and wanted to work with me when I was a teen. He wanted to help our community, but he said he only has Bitcoin,” Alberto recalled. “So I started to learn, and eventually downloaded the app and began to understand I could have control over my money.”

The budding crypto leader also emphasized that in El Salvador, citizens cannot even open a bank account until they are eighteen years old.

“But with Bitcoin, we can teach them about money and saving long before that and give them opportunities, so they don't join gangs or end up in prison,” Alberto enthused. “Kids here can understand how to build a business and a better life with Bitcoin so that they don't want to flee to the US. It will be the United States coming here.”