The Challenge of Convincing China to Push North Korea Towards Denuclearization 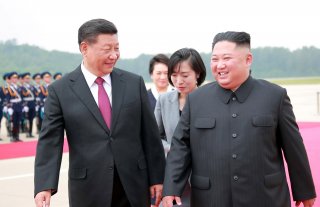 The United States should try to collaborate with China on the North Korean nuclear problem. The two countries will likely be able to work on some aspects of the issue without too many problems, while agreement on others will likely be difficult and may ultimately prove to be impossible. But cooperation between the two major powers is worth pursuing as it could raise the chances of producing a stable solution to the North Korea conundrum.

Relations between China and North Korea are currently at one of their warmest points in recent years. Politically, Chinese and North Korean leaders have exchanged messages reaffirming the traditionally close ties between the two countries. Militarily, they are set to renew a mutual cooperation treaty. In theory, the treaty would obligate them to come to the defense of one another even if there is debate about whether China would actually do so. Economically, China remains North Korea’s biggest trade partner, even though trade between the nations has dropped significantly over the last year due to the coronavirus pandemic. North Korea’s current economic difficulties likely mean that it will need to rely on its neighbor for assistance in the months ahead.

In short, China’s leverage over North Korea is growing. While this does not mean that North Korea will do China’s bidding, it means that China continues to have more influence than any other country over North Korea. After all, Beijing has been frustrated many times by Pyongyang’s refusal to heed its advice.

China is likely to use its leverage in at least one area of shared interest with the United States: it wants to prevent North Korea from conducting further nuclear and long-range missile tests. China expressed its opposition to such tests in 2017 by supporting stringent economic sanctions at the UN Security Council. Also, there were signs that China, which is normally very wary about pushing North Korea to its breaking point, was at one time enforcing those sanctions to an unprecedented degree.

China may also be open to the idea of using its influence to cap North Korea’s production of nuclear weapons and missiles, a desirable development for the United States. China may see the benefit in doing so because quantitative, as well as qualitative improvements in North Korea’s arsenal, could encourage the United States and its allies to beef up their own systems in response, which goes against China’s interests.

The United States and China will likely differ over what the rollback of North Korea’s nuclear and missile capabilities and the country’s ultimate denuclearization will look like. China prefers a nuclear-free North Korea but wants it only on terms that benefit Beijing. Most important for China is that denuclearization takes place without strengthening U.S. influence in the region.

It may prove challenging to convince China to use its leverage to push for deeper denuclearization steps. The United States may have to try to change China’s strategic calculus. For example, it could consider trade-offs with other issues that Beijing considers important, such as those that concern trade or other foreign policy matters.

The United States could then face the question of weighing such costs with the benefits of obtaining Chinese cooperation. Although a coordinated approach does not guarantee that North Korea will respond in a favorable manner, it could increase the chances that it will do so. After all, any arrangement that has the backing of North Korea’s largest ally is likely to be more stable than one that does not.

Dr. Naoko Aoki is an adjunct professorial lecturer at American University and a Research Associate at the Center for International and Security Studies at Maryland. She specializes in East Asian political and security affairs.