Chaos on the Horizon: Pakistan Wants a Risky Reset 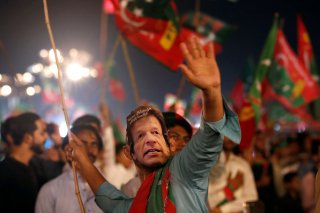 The Biden administration’s approach to South Asia has focused primarily on the promotion of U.S.-India relations. For example, the administration sent Secretary of Defense Lloyd Austin to meet Indian leaders in New Delhi. It stressed the importance of India at its Interim National Security Strategic Guidance. Additionally, it has actively promoted the U.S.-India-Japan-Australia Quadrilateral Security Dialogue, also known as the Quad. Although the results of these policies have been mixed, shortcomings have not resulted from a lack of U.S. interest.

Even as it has sought to cultivate India, however, the Biden administration has largely ignored the other big, nuclear-armed state in South Asia: Pakistan. Secretary of Defense Lloyd Austin bypassed Pakistan on his recent visit to the region, as did climate czar John Kerry. President Joe Biden has not even spoken to Pakistan’s Prime Minister Imran Khan. Pakistani and U.S. National Security Advisors Moeed Yusuf and Jake Sullivan did meet in Geneva last week. But their discussion yielded only a terse statement reporting that the two sides had talked about various issues of “mutual interest,” including means of advancing “practical cooperation,” and had agreed to “continue the conversation.”

It is reasonable for the Biden administration to prioritize U.S.-India relations over its relationship with Pakistan. Despite the United States and Pakistan’s ostensible partnership over the past twenty years in the Global War on Terror, the relationship between the two countries frayed badly during that conflict. Pakistan often worked at cross purposes with the United States, supporting the Taliban and related groups, and undermining coalition efforts to stabilize Afghanistan. Meanwhile, the United States and India developed a close partnership, with India becoming central to U.S. efforts to offset rising Chinese power in the Indo-Pacific region.

Nonetheless, Pakistan remains an important regional power. It possesses a significant nuclear weapons capability. It is locked in a longstanding security competition with India. It enjoys a close relationship with China. And it wields considerable influence in Afghanistan. Failure to engage Pakistan reduces the ability of the United States to understand Pakistan’s position, and potentially to affect its behavior, in these critical areas.

The Biden administration should not, then, continue to ignore Pakistan. But, in its efforts to strike a better balance, it must not overcorrect and move too far in the direction of U.S.-Pakistan cooperation. Many influential voices advocate just such an approach. Leading analysts argue, for example, that the United States should take advantage of new leadership in Washington, impending U.S. withdrawal from Afghanistan, and a growing Pakistani need for foreign investment, not just to engage Pakistan, but to reset U.S.-Pakistani relations. In this view, the Biden administration should work closely with the Pakistani government to promote far-reaching economic cooperation, including building manufacturing facilities in Pakistan and turning the country into a re-export hub for U.S. goods into China.

Senior Pakistani officials make similar arguments. In a recent speech, Pakistan Army Chief Gen. Qamar Javed Bajwa, touting Pakistan’s “tremendous geo-economic potential,” stated that cooperation with the new Biden administration could “transform” the South Asian region and “guide us into a future full of peace and prosperity.” He subsequently communicated to senior United States officials Pakistan’s desire to pursue “greater cooperation” with the U.S. in “all domains.” According to Yusuf, today’s Pakistan is “very different” than before, dedicated to an “economic security paradigm” and “100 percent open to improving the (U.S.-Pakistan) relationship.” At the meeting in Geneva, Yusuf reportedly presented Sullivan with a blueprint for enhanced U.S.-Pakistan relations based on expanded trade and economic cooperation between the two countries.

A reset in the United States-Pakistan relationship sounds attractive, but efforts to achieve it are unlikely to succeed. The United States could not sustain close cooperation with Pakistan, even in the realm of trade and economics, unless Pakistan fundamentally changed its strategic behavior. At a minimum, this would include abandoning its anti-Indian terrorism campaign, ceasing support for the Taliban and related groups in Afghanistan, and distancing itself from China.

The Pakistanis have suggested that such a transformation is possible. Bajwa, for example, claimed that Pakistan could “bury the past” with India, and was committed to “peace in Afghanistan.” While acknowledging the centrality of Pakistan’s relationship with China, he also maintained that Pakistan had “diverse potential,” and should not be viewed solely through the lens of Sino-Pakistani cooperation.

In truth, over its seventy-four-year history, Pakistan has never fundamentally altered its strategic behavior. Even in the face of major changes in the security environment—losing wars with India, acquiring nuclear weapons, joining the Global War on Terror—Pakistan has consistently been guided by its ideological commitments, particularly the perceived need to undo Indian control of Jammu and Kashmir. Therefore, it has steadfastly adhered to policies designed to promote this outcome, including deploying Islamist militants against India, acquiring strategic depth in Afghanistan by supporting the Taliban, and cultivating China as an “all-weather” friend. Pakistan continued to do so even as it accepted tens of billions of dollars from the United States in return for its purported cooperation in the War on Terror.

At present, terror groups such as Lashkar-e-Taiba and Jaish-e-Mohammed remain based in Pakistan and active on Indian territory. Omar Sheikh, found guilty in 2002 of kidnapping and murdering journalist Daniel Pearl, could go free after the Pakistani Supreme Court overturned his conviction. The roughly $80-billion Pakistan-China Economic Corridor, though currently underperforming, ensures that close Sino-Pakistani strategic cooperation will continue far into the future. And although Pakistan helped to secure Taliban participation in the Afghan peace process, it continues to provide sanctuaries for the Taliban and related militants and has been unable to get the Taliban to agree to a ceasefire. This is not a recipe for a United States-Pakistan reset. It is a recipe for more of the same.

This does not mean that the United States should eschew all engagement with Pakistan. More high-level dialogue, including a conversation between Biden and Khan, would be helpful. And modest economic initiatives, such as the establishment of tariff-free zones for Pakistani exports to the United States, could promote mutually beneficial trade, involve relatively low cost and risk, and avoid areas of past U.S.-Pakistan acrimony.

But any such initiatives must be conditioned on measurable improvements in Pakistani behavior, and not simply granted as part of a sweeping reset of the U.S.-Pakistan relationship. Trump’s South Asia strategy was clear on the need to link U.S.-Pakistan cooperation with improved Pakistani behavior, and the Biden administration would do well to take a similar approach. Even if doing so does not change Pakistan’s policies, then it will create incentives for improvements and, at the very least, not support ongoing Pakistani malfeasance. Pakistan is too important for the United States to ignore. But the United States must not harbor any illusions regarding a reset in U.S.-Pakistan relations.

S. Paul Kapur is a professor in the Department of National Security Affairs at the U.S. Naval Postgraduate School. From 2020-2021, he served on the State Department's Policy Planning Staff. The opinions in this article are his alone.