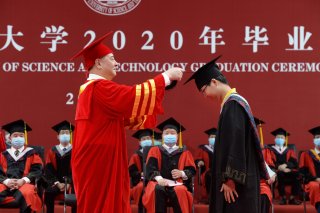 Amid an ongoing trade war, an escalating struggle for technological supremacy, and intensifying strategic competition Americans and Chinese at least agree that 2020 has been a bad year for the United States. This summer a Wall Street Journal poll of Americans found that 80 percent feel their country is “spiraling out of control.” Gathering public opinion data in China is a difficult business, but the available evidence suggests that the average U.S. favorability rating in China has declined significantly this year. But that general Chinese perception masks a characteristically huge diversity of views among 1.3 billion people. It is easy for politically and epidemiologically exhausted Americans to imagine that China is laughing all the way to the bank at America’s travails, but in reality, they are confused about America too.

America’s political and social unrest and failure to control the coronavirus pandemic have certainly given added force to pre-existing perceptions of American decline, especially against the backdrop of China’s successful pandemic response. The Trump administration in general and its chaotic pandemic response, in particular, are broadly seen as having damaged American prestige to China’s benefit. Hence the tongue-in-cheek nickname bestowed on President Donald Trump by Chinese social media: “Trump who builds China.” Hu Xijin, the hard-line nationalist editor of the Global Times state newspaper, urged Americans to reelect Trump because the hawks around him strengthen China’s “solidarity and cohesion.” On the other hand, accelerating decline is seen as bolstering American determination to contain or encircle China. Already in 2016, the Pew Research Center found that 54 percent of Chinese said “the U.S. is trying to prevent China from becoming as powerful as the U.S.” And relations have deteriorated since then. Fu Ying, a prominent Chinese politician, probably speaks for most Chinese in her assessment that “[U.S.] strategy for competition is aimed at effectively restraining China in all aspects.”

Trump’s perceived incompetence may have won him some Chinese fans and his China-baiting rhetoric is seen as a political gift to Xi Jinping, but his seeming embodiment of American unpredictability and perceived hard-line containment policies temper that enthusiasm in other quarters. Shi Yinhong, a prominent professor of international relations at Renmin University, observes that Trump has adopted a “Machiavellian approach toward China” and that “Trump’s White House is directed by anti-China hawks.” Nor is it clear, as Trump claims, that Chinese elites prefer former vice president and presumptive president-elect Joe Biden, who has described Xi Jinping as a “thug” and signaled his intention to strengthen U.S. alliances and organize a new “summit of democracies.” Wei Zongyou, a Fudan University professor specializing in US-China relations, told the South China Morning Post, that under a Biden administration "the competitive trend will also not change."

Young Chinese have historically viewed the United States more positively than older ones, but in 2020 that support seems to be ebbing rapidly. Polling during the pandemic indicates that support for the U.S. by Chinese 18 to 30 year-olds has dropped more sharply than for older age ranges. Some of this drop is probably related to the perceived erosion of the Chinese student experience in America. Pandemic-induced closures of U.S. college campuses, which collectively host around 360,000 Chinese students, and a U.S. government crackdown on espionage activity by a minority of those students unsurprisingly make for deep disappointment in America. One Chinese undergraduate in the United States told the BBC that America is now “anti-China.” The pandemic and U.S.-China tensions are likely to reinforce the pre-pandemic trend for a greater share of Chinese foreign students to return home after graduation.

Yet alongside triumphalism, anger, and disappointment there remains admiration for America. It has not escaped notice in China that Americans won Nobel Prizes in five out of six categories this year. In 2019, the Chinese scientific community convened a “World Laureates Forum” in Shanghai in part to learn how China could generate its own Nobel Science Prize winners. On that occasion, Chengxin Pan, a Chinese academic, told the South China Morning Post that the “[science] Nobel Prize is the holy grail for China, and it is still quite elusive for Chinese indigenous scientists to be awarded this prestigious recognition.” China continues to flatter America through imitation in other areas well. U.S. commentators were quick to point out that digital renderings of a new family of Chinese space rockets bear a strong resemblance to the U.S. SpaceX Falcon 9 rocket.

Average Chinese views of America turned more negative in 2020. But specific sentiments across the enormity of Chinese society are complex and contradictory, just as they are across American society. It is easy to forget that China supposedly had a bad year last year due to protests in Hong Kong and international condemnation of its treatment of Uighurs in Xinjiang. Now that seems forgotten. Perhaps the lesson is that history is full of half-formed trends, sudden fevers, and passing fads. The nearly impossible task is to distinguish those from major forces in real-time.

Evan Sankey is a national security fellow at the Center for the National Interest.