China and the Importance of Civil Nuclear Energy 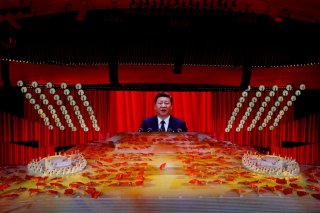 HISTORY TELLS us that for a country to govern sensibly and protect its interests at home and abroad requires experienced, competent professionals with the acuity to analyze and navigate the complex space of national security and foreign affairs, one that is replete with military, economic, technological, geopolitical, and diplomatic tensions. In the aftermath of World War II, individuals such as Secretary of State Dean Acheson, Secretary of War Henry Stimson, and Senator Arthur Vandenberg, among others, challenged Americans to accept that the United States must conduct its affairs and act in the world as it is, and not in the world as we wish it were. They emphasized both the necessity and strategic advantage of a U.S.-led allied system and the need to nurture what Winston Churchill originally characterized as a special relationship, and others have characterized as an essential relationship, between the United States and the United Kingdom.

Decades later, individuals such as Senators Richard Lugar and Sam Nunn, National Security Advisor Brent Scowcroft, and scholars like Richard Pipes, Gaston Sigur, and Grace Hopper, among others, continued this legacy throughout America’s tensions with the USSR. However, since the end of the Cold War and particularly over the past twenty years, America has faced complex risks and trade-offs for which twentieth-century geopolitical strategy is insufficient and for which America may be out of practice diplomatically. In a recent piece in National Review, for example, Bing West, a veteran Marine officer and noted author with years of experience in conflicts from Vietnam to Afghanistan and Iraq, records the grievous flaws of the Bush administration in 2001 that committed our country to a mission of nation-building in Afghanistan. Surely the horrific attack by Al Qaeda on 9/11 required swift retribution on the perpetrators in Afghanistan. But just as surely, we must expect that someone from among the elected and appointed officials at the White House, the State and Defense Departments, and intelligence agencies would have possessed the insight to point out the downside risks of a prolonged engagement such as have unfolded in Kabul in the past twenty years.

American officials would do well to adhere to two guidelines for judging whether our country should engage in long-term post-conflict commitments. First, predisposition. The country we seek to assist should have a political predisposition toward pluralistic governance and the economic means (with modest recovery assistance) to stimulate and achieve sustainable growth (e.g., Japan, Granada). Second, enduring ally. The country must remain allied with us in opposition to any ongoing threat to vital American interests (South Korea, Germany, Italy).

In the wake of 9/11 planning, surely someone should have had the wherewithal to point out that historically nurturing a political evolution from tribalism to institution-building and, ultimately, pluralistic governance, requires generations involving periodic conflict and enormous cost in lives and treasure. Instead, none of the five officials around the table in the Situation Room in 2001 put their foot down regarding our goals and limits in Afghanistan. True, the original goal was stated as assuring against any renewed hosting or sponsorship of a terrorist attack on our soil from Afghanistan. And to the lasting credit of the military units deployed to Afghanistan, we were able to locate Osama bin Laden within weeks in Tora Bora, a mountainous redoubt in the eastern part of the country.

West makes it clear that these forces were trained and equipped to carry out a sustained assault involving heavy bombing, intense scouting, and patrolling and over weeks not months would have ended a successful siege with the capture of bin Laden. Unfortunately, that approach was aborted for no good reason. With the Taliban scattered from Kabul at the outset, over time stability could have been established and maintained until an allied force was organized and deployed to focus on training a sufficient Afghan force to keep the Taliban off-balance with the support of allied air support and an effective advisory force as a sustainable strategy. And yet, in the ensuing months, “mission creep” led to as many as four ambassadors being deployed to Kabul to oversee the sweeping work of “Provincial Reconstruction Teams” with an open-ended mission throughout the country. Their ever-creeping mission would have taken a generation or more, if ever, to be accomplished.

By contrast, it may be useful to recap a different story—our seventy-year presence in South Korea. There we have nurtured an ethnically homogenous community to becoming a vibrant, resilient nation while defending a vital American interest—deterring Communist China from seizing critical terrain on its way someday to the capture of Japan and Taiwan. The point here is not to curse the darkness of defeat but to awaken from any political and diplomatic failures in Afghanistan and sound the alarm for Americans and our allies—especially our UK ally—that “the world as it is” goes on, and that for the past twenty years a historic threat to our vital interests has been brewing.

AS CHINA watched much of the Cold War from the sidelines, lessons were learned by the two superpowers, perhaps best expressed by President Ronald Reagan in his declaration that “a nuclear war can never be won and must never be fought.” Taking heed that the stakes of nuclear war had become inestimable, but nursing resentment from more than a century of abuse and humiliation, China’s ruling Communist Party continued to lay low and bide its time, all the while honing its revanchist empire-building strategy for achieving national rejuvenation.

Rather than risk armed conflict or trigger more escalation, Beijing’s strategy, known in China’s highest circles as Unrestricted Warfare, is designed to enable China to achieve at least three goals: 1) the capture and control of the world’s strategic resources (e.g., cobalt from Congo, lithium from Chile); 2) take critical terrain (e.g., Suez, Malacca, Gibraltar); and 3) provide itself assured access to, and control over, commerce within the world’s greatest markets (Western Europe and the United States). China currently owns ninety-six ports spread throughout the world. China’s goal is to penetrate, discredit, and undermine our democratic system of governance and the rules-based, pro-market liberal world order we have nurtured for decades and of which we are the free world’s leading promoter.

In 2013, with the arrival in office of President Xi Jinping, China began the serious rollout of its grand plan. Originally, Xi cast the strategy publicly in a benign wrapper known as the Belt and Road Initiative (BRI). Its purposes and content, however, were unmistakable. In close collaboration with Russia, China sought to penetrate, and ultimately dominate, country after country using predatory lending and traditional mercantilism. Engaging with enticing offers to build infrastructure, the BRI strategy seeks political and economic influence, if not dominance, through local dependency on Chinese goods and services. Ultimately, its goal is to dislodge the U.S. dollar as the world’s reserve currency.

In 2018, after securing changes in Party rules that virtually assure his chairmanship for life, Xi accelerated the pace of his effort to expand China’s influence and control throughout the world. He’s no longer laying low or biding his time. For example, today China owns 60 percent of Congo’s cobalt; much of Chile’s lithium (for batteries); and ports in Sri Lanka, Greece, Italy, and others spread throughout Europe. China also wields control of more than 70 percent of solar panel manufacturing worldwide.

Russia has followed suit, contracting to build four large nuclear power reactors in Egypt and two more units in Turkey, which will give it a dominant role on the Suez Canal and in the Eastern Mediterranean where Russia already maintains a naval base at Tartus on the coast of Syria. China and Russia use nuclear power plant projects as arms of their foreign policy and gain military basing rights to ship nuclear fuel to those new sites. For this China-Russia tandem, nuclear energy is not merely a market commodity, it’s a weapon in an arena where state-owned enterprises are the competing gladiators.

Both China and Russia are also expanding into Africa and South America, buying up substantial stakes in mineral resources with focused entrees in energy. China has also acquired a site in the Bahamas where it intends to build a deep-water port. In sum, Russia and China are establishing dominance over country after country using offers to build much-needed critical infrastructure without having to deploy a soldier or a ship and without having to fire a shot. We underestimate the implications of this encroachment because we focus on military movements.

CONCURRENT TO the foregoing geopolitical turmoil, two other evident trends, population growth in emerging economies and urbanization, pose both serious challenges and potential opportunities for all of humankind. Over the next thirty years, the global population will grow to ten billion people. Ninety percent of that growth will occur in non-Organization for Economic Co-operation and Development countries and involve migration to cities that will require an unprecedented scale of industrial and social services. The need for reliable and clean electricity, clean water, and nutritious food will be staggering and will pose the largest and most intense developmental challenge in human history. Clearly, the dominant provider of that infrastructure will have gained political influence along with staggering profits and will dominate the world. Today, China and Russia are strategically positioning their respective countries to be those providers.