China Could Announce a ‘Total Exclusion Zone’ at Any Time 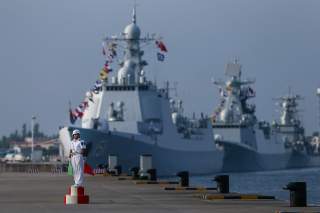 With all the coverage of North Korea over the last year, it’s easy to forget about the other major Cold War legacy that still haunts the East Asian region. Even as the ideologically-infused fratricidal war among Koreans never really ended, the same can be said, to some extent, of the Chinese Civil War. Indeed, few can recall these days that the fates of Korea and Taiwan were intrinsically linked. If Kim Il-sung’s armies had not struck south in June 1950, it’s most likely that Taiwan—the “Republic of China”—would not exist. American leaders had already concluded in late 1949 that the United States should not defend the Chinese Nationalists on Taiwan. Truman stated with great clarity on January 5, 1950: “The United States has no predatory designs on Formosa, or any other Chinese territory … [and would refrain from involvement] in the civil conflict in China.” That decision was only reversed because of Kim Il-sung’s fateful choice, of course.

The point of this Dragon Eye column is not a reprise of this history or the arguments for or against American defense of Taiwan. Rather, U.S. leaders and the American public both need some awareness regarding what Chinese strategists are saying about the “beautiful island,” as a prerequisite for sound policy in Washington. In a word, these discussions are rather dark and hint that the possibility of a “bolt from the blue” may no longer be so remote. A pair of mid-2018 articles in the usually technically oriented Chinese defense magazine Ordnance Science and Industry [兵工科技] provides a telling inside glimpse of Chinese strategic thinking regarding Taiwan.

The first article never actually mentions the word “Taiwan.” This is not surprising, since the subject has, for at least the last decade, been regarded as too delicate to be discussed seriously in China’s defense press. Rather, the direct subject under study in this piece is “blockade [封锁]," and the reason for China’s close interest in the subject is obvious to all. At the outset, the author explains that a blockade campaign against a given island target is quite straightforward,” . . . taking naval forces as the main element and coordinated with ground, air, strategic rocket, space and cyber forces, actions are taken to control a certain sea area . . . [以海军力量为主, 在陆军, 空军, 战略火箭军, 天军, 网军配合下采取 . . . 多种手段控制一个海域] and to prevent passage through it by enemy forces.”

A number of historical analogies are offered and discussed. It is noted that German submarines struck at British shipping just three days after the declaration of war during World War II. The use of sea mines is a disturbingly common theme in this analysis of blockades. The point is made that Germany laid thirty thousand sea mines during World War II and these mines sank 280 Allied warships and 296 merchant ships. Moreover, this analysis also observes that American B-29s dropped 12,035 sea mines into the sea areas surrounding Japan. It is explained: “For the minor loss of 15 aircraft, the U.S. military . . . succeeded in sinking or damaging 670 Japanese ships and this fundamentally severed Japan’s maritime transport nodes [美军 . . . 以损失15架飞机的微少代价取得了击沉击伤日本670艘舰船的战绩基本切断了日本的海上交通线].” China’s People’s Liberation Army Navy (PLAN) mine threat was sufficient to blockade Taiwan ten years ago. These capabilities have only increased since then relative to various countermeasures.

More contemporary examples are also discussed. In a previous piece, I had written that the Taiwan scenario could present a “Cuban missile crisis in reverse,” and so it is not surprising that Chinese strategists are exploring this historical episode. Here, the Chinese author relates how America built an immense armada off the Cuban coast that amounted to 240 warships, eight aircraft carriers, and 386 aircraft. With evident admiration, the author writes that this force “achieved the goal of a deterrence blockade, forcing the Soviets to yield [达到了威慑封锁的目的迫使前苏联作出让步].”

Likewise, this Chinese strategist also praises Britain’s effort in the Falklands War, noting that London was able to build various rings for its “Total Exclusion Zone,” that “succeeded in the goal of blockading and seizing the Malvinas Islands.” The special role of nuclear submarines in that particular campaign is duly noted, moreover. Another example mentioned is the effort of Coalition forces during the Persian Gulf War in which 250 ships and more than 500 aircraft are said to have created a “blockade combat system [封锁作战系统].” The analysis concludes, “Without supremacy, one cannot talk about blockade operations.” Thus, sea and air control are assessed to be the decisive enablers. No wonder China’s wharves are buzzing with activity these days.

Another article from that same magazine takes the discussion a step further. This article profiles the PLA Air Force (PLAAF) moves to undertake “island envelopment patrol [绕岛巡航]” operations over the last two years. These air missions that involve sorties around the east side of Taiwan are said to have provided PLAAF crews with excellent experience and demonstrate that the PLAAF’s long-range combat capability has improved. There is some boasting that such missions have been “normalized [常态化]” and “institutionalized [体系化].” Not surprisingly, the analysis does not have especially kind words for American actions: “The US . . . employs every method to stir up the South China Sea and meddle in China’s Taiwan issue.” The article concedes that American (and all other) warships have a right to navigate through the Taiwan Strait, but says this activity demonstrates America’s “obvious political and military intentions.” It is added that “sending [U.S.] officials to Taiwan activities repeatedly . . . has aroused the righteous indignation of the masses [多次派遣官员赴台活动 . . . 引起了民众的愤慨].”

With the Asia-Pacific awaiting the official unveiling of China’s new bomber, H-20, the PLAAF seems to be on a roll. The “island envelopment patrols” have captured some attention back from the ambitious PLA Navy and its rousing blue-water capabilities. It’s easy to see how interservice rivalry in China could further stoke the embers heating up under U.S.-China relations. (The same phenomena is visible in Washington as well, of course.)

Taiwan is so proximate to mainland China—a mere one hundred miles—that bombers on “island envelopment missions” are not likely to play a major role in subduing Taiwan, even if it makes for a nice exercise photo. The PLAAF is powerfully enabled, of course, by the highly accurate missiles of China’s strategic rocket forces and so the PLAAF will likely only serve in “mopping up” operations. If the vast firepower of the Second Artillery was somehow insufficient, the PLA Navy and other forces in the PLA have stockpiled plenty of land-attack cruise missiles for the job. There is that interesting fact, moreover, that the mainland could cover most of the relevant landing areas with devastating rocket artillery fire—a cheap and highly effective method of destruction.

Then again, all the above capabilities are likely redundancies since tens of thousands of advanced sea mines should suffice. The Taiwanese may want to stockpile lots of canned goods and pour some extra concrete for shelters too. If U.S.-China relations are permitted to continue in the present downward spiral, there is indeed much more to worry about than U.S. stock portfolios.

A thoughtful Beijing strategist recently observed to me in a meeting that China is not very good at deterrence. He noted that in both the Korean War and the Sino-Indian War that Beijing’s deterrent signals were ignored and war resulted. America should pay close attention to Chinese signaling regarding its “core interests” [核心利益] and strive energetically to calm tensions across the Strait. Otherwise, we could see the announcement of a “total exclusion zone” covering Taiwan at almost any time.