China Is Learning from Russian Military Interactions with the United States 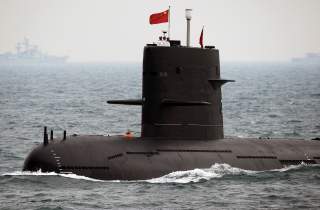 An April 26, 2019, headline in the Chinese newspaper Global Times was quite typical: “The US takes the unusual step of threatening Russia with two aircraft carriers. Russia’s answer: that makes you a bigger target [美罕见用双航母威胁俄 俄回应：让你变大活靶].” In the new era of Kinzhal and Bulava, not to mention Poseidon, such a bellicose posture of swagger or a mentality of “bring it on” appears to be more and more common. Often, American strategists belittle the Russia-China entente, pointing out that their actual linkages remain sometimes woefully inadequate. However, that perspective may underestimate the psychological value that accrues to both power, and in particular, how Beijing benefits from “strategic learning,” by following Russian patterns of rivalry interaction.

This analysis, however, intends to go beyond the important dynamics of the Russia-China entente, and rather aims to tackle the vital question of Beijing’s overall reaction to America’s defense strategy of “Great Power Competition.” A fall 2018 study in the Chinese military magazine Ordnance Knowledge [兵器知识] takes up the question of “reacting to ‘great power competition’ [应对 ‘大国竞争’],” including a particular focus on the U.S. Navy. At the outset, this article notes that the U.S. defense strategy has explicitly identified both Russia and China as the “main opponents for competition [主要竞争对手],” observing that Washington has concluded that the threats emanating from Beijing and Moscow now “exceed that of terrorism.” It concludes that the continuously rising U.S. defense budget provides a “development window [发展机遇]” for the U.S. Navy.

Part of this Chinese article examines the U.S. Navy response to the Russian challenge. A “recent revival in Russian comprehensive power [最近年俄罗斯综合国力的复苏] is described, including reasonably “successful” military interventions in both Ukraine and also Syria. “The Russian Navy has significantly strengthened its presence in both the Black Sea and also the Mediterranean, but the activities of Russian warships in the North Atlantic, Baltic, as well as the Arctic Ocean has obviously increased, as well,” according to this Chinese analysis. It is stated that heavier U.S. Navy forces (e.g. USS Truman aircraft carrier battle group) are tied down in the Mediterranean and unable to confront the Russian Navy in the North Atlantic. Meanwhile, the article contends that Russia’s Yasen-class nuclear attack submarine can attack any cities or targets along America’s east coast. “Russian Navy submarines could even adopt the German Navy’s ‘wolf-pack’ tactics [狼群战术] from World War Two and cut the supply lines between the US and Europe.” As a result, NATO is said to be “weighed down by anxieties [忧心仲仲]” regarding Russian naval activities. For this reason, the U.S. Navy reestablished the Second Fleet about a year ago, according to this Chinese analysis.

Whatever one makes of the quality of the Russia-China entente, it seems quite clear that Chinese strategists are thankful that Russia has pulled away some of America’s attention from the Asia-Pacific region. And what does this Chinese analysis of the U.S. emphasis on “Great Power Competition” have to say about Washington’s development of strategy in that part of the world, the “Indo-Pacific?” The article does discuss the meaning of renaming Pacific Command as “Indo-Pacific Command” [印太司令部] as a key part of the new “Indo-Pacific Strategy.” According to this article, this change will help to raise the profile of India in American strategy and promote closer ties between New Delhi and Washington.

In general, this Chinese analysis concludes that the Trump administration’s “Indo-Pacific Strategy” is an “extension and expansion” [延伸与拓展] of President Barack Obama’s “Asia-Pacific Rebalance Strategy.” There is a recognition that this is America’s strongest command, overseeing forces that include six aircraft carriers, 200 warships and 1,100 aircraft. There is no doubt at all evident in this article whom the target of this strategy is, as the Indo-Pacific Strategy is said to call for “increases … of deployments for the purpose of dealing with China [增加 … 兵力部署以应对中国].” Here, the American strategy is also said to be aimed at “countering Chinese influence in the Indo-Pacific region.” More disturbing perhaps, is the notion here that the new American strategy is viewed as intended to strengthen the cooperation of Japan, Australia and India to contribute to the defense of Taiwan. Indeed, the piece articulates a concern regarding the so-called “Quad” grouping encompassing Washington, Tokyo, Canberra and New Delhi. The new U.S. strategy, it is explained, seeks to “create an ‘Asian version of NATO’ to surround China [打造包围堵中国的‘亚洲版北约.”

Yet, this Chinese assessment rates U.S. military forces as suffering from overstretch. U.S. Navy combat capability is evaluated here to be “just getting by [勉强及格].” The Seventh Fleet, moreover, is reported to be trying to accomplish too many missions while “extremely undermanned [人力严重不足].” Not surprisingly, the two fatal collisions from 2017 are noted in this regard. With respect to the U.S. Marine Corps, this Chinese assessment also pulls no punches. It is asserted that counter-insurgency has resulted in a “serious corrosion [严重侵蚀]” of the Marines’ high-intensity warfare core competence. Moreover, there are reported to “exist major gaps in the force [存在较大的兵力缺口],” including the numbers of F-35B fighters, CH-53K helicopters and KC-130J air refueling aircraft. Nor are America’s “adversaries” standing still, of course, and with a certain glee the Chinese author seems to point out the Russian Navy has already deployed the hypersonic Kinzhal missile “that can effectively deal with aircraft carrier battle groups.” The point is also made that both Australia and India, and even Japan, have voiced concerns about America’s new defense strategy.

In the end, the piece laments that U.S. strategy is “unwise.” Not only will the strategy spark a great power arms race, but will have an unpredictable and negative impact on the regional security situation. This Chinese analysis ends with the idea that the U.S. Navy’s global strategic expansion will actually “accelerate America’s tendency toward decline [会加速美国进一步走向衰落].” To be sure, many U.S. strategists will dismiss this Chinese article as pure propagandistic gibberish. There is perhaps a certain “puffing up” aspect of the analysis. And yet many scholars in the West have also pointed out the all too apparent risks of “imperial overstretch.” If American forces are present everywhere, then they are, almost by definition, strong nowhere, given finite resources. The notion that renaming Pacific Command is a grand innovation that will re-establish a faltering balance in the Asia-Pacific sounds itself like so much propaganda. Indeed, it is hard to discern how US national interests have actually benefited from the new strategy of “great power competition.”