China vs. Taiwan: A Return to ‘Massive Retaliation’ in the Taiwan Strait? 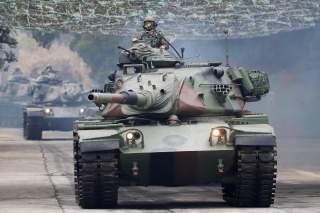 In retrospect, the fact that President-elect Donald Trump took a call from Taiwan leader Tsai Ying-wen in December 2016 should have been a very clear signal that U.S.-China relations were about to go badly off the rails. It’s probably not a coincidence that “strange” military incidents, including China’s “drone snatch” in the South China Sea, and the flagrant brandishing of new mobile DF-41 ICBMs followed hard upon the now famous “telephone call.” Over the last two years, it is quite unfortunate that the Taiwan scenario has once again risen to prominence as the global situation most likely to trigger a nuclear apocalypse.

And yet “thinking the unthinkable” is not the only reason to reflect on Taiwan these days. There is also the interesting historical fact that seventy years ago the People’s Republic of China (PRC) was founded and, not coincidentally, the “Taiwan issue” in U.S.-China relations was born. Actually, a stellar history was published in 2017 by Kevin Peraino, covering the crucial year of 1949 in exacting detail under the title, A Force So Swift: Mao, Truman, and the Birth of Modern China, 1949. That timely book is very useful and belongs on the shelf of anyone interested in China and Taiwan.

Among the fascinating revelations from this book is the extent to which Madame Chiang (the Nationalist KMT Generalissimo’s wife) undertook “influence operations” in the United States. Peraino explains: “Madame Chiang … tried to restrict Acheson’s freedom of maneuver by tilting American public opinion in her own direction. She cabled the Generalissimo [from her temporary residence in New York City] and asked him to allocate $200,000 to help fund a public relations organization that would lobby important [American] journalists and legislators.” That would amount to millions in today’s dollars.

We need not to speculate here on how that same money influence machine works today in Washington seventy years later to contort U.S.-China relations, but why was Madame Chiang so eager to cashier the American Secretary of State? The reason, of course, is that Secretary of State Dean Acheson was engaged in an intensive debate through much of 1949 with both General Douglas MacArthur and also Secretary of Defense Louis Johnson over “whether the island [of Taiwan] was strategically crucial.”

Acheson was determined not to fortify the island and apparently observed later by way of an analogy, according to Peraino, “Formosa [was] a subject which seems to draw out the boys like a red haired girl on the beach.” After hearing both sides make their respective arguments throughout 1949, Truman decisively favored Acheson in this crucial debate, as I have discussed elsewhere and this decision ultimately led, in due course, to the firing of both Johnson and eventually (via Korean War machinations) MacArthur too.

A fascinating window into the final stages of the Taiwan debate in 1949 is provided in Peraino’s description of a December 30 phone call between President Truman and Congressman Walter Judd, a fervent supporter of the Nationalist cause on Taiwan. Judd apparently told the President that he should “try to save Formosa first,” with presumably the rest of China to follow later on. Peraino narrates: “… the President snapped, ‘How many American soldiers do you want to put on Formosa? … It would take ten divisions [and] I am not willing to do that.’ Judd protested that he had no desire to deploy U.S. ground troops. But the conversation was already beginning to infuriate Truman.

The President, Judd later recalled, ‘became intense, angry, [and] explosive about the rottenest government in China that ever existed … They surrendered every bit of aid we gave them. They went over to the Communists whole armies at a time.’ … ‘Why, we had supplied whole Chinese armies,’ the President raged on.” As Peraino notes, Truman held a press conference a few days later in early January 1950 to fully explain that America had “no desire to obtain special rights or privileges or to establish military bases on Formosa or to detach Formosa from China.”

While to this day, Acheson is still pilloried unfairly for supposedly causing the Korean War by suggesting that Korea was outside the U.S. defense perimeter, Peraino renders a far wiser judgement. He explains: “… the strategy that Truman and Acheson crafted together in 1949 … pointed the way, two decades later, to the more conciliatory policy toward Beijing adopted by President Nixon.” While many in Washington have seemed to forget, Taiwan was not a minor issue in the negotiations that brought about the diplomatic rapprochement between Beijing and Washington that has served both countries and the whole world well over the last forty years.

Not surprisingly, Chinese mainland scholars are quite interested in the fine points of Taiwan history and often are shining a light where few Western researchers have bothered to look. Not long ago, for example, a mainland history journal published “A Secret History: American Nuclear Deployments in Taiwan [一段隐秘的历史: 美国在台湾的核历史]” that exhibits an impressive familiarity with declassified U.S. government documents.

While this Chinese article does note that the purpose of these American nuclear deployments at the height of the Cold War was “to deter and even carry out nuclear strikes against China [为了威慑中国乃至对其进行核攻击],” the piece is neither bitter nor shrill. The situation is rather well contextualized, moreover, and there is ample discussion of both Taiwan crises in 1954 and 1958. The article also particularly explores the problems inherent in the Eisenhower Administration’s defense “Doctrine of Massive Retaliation [大规模报复战略].”

The data presented in the article show that most of the U.S. nuclear weapons deployed to Taiwan were Matador-type ground-launched cruise missiles and reached a peak of fifty-six weapons over the period 1967-69. The analysis relates that the U.S. nuclear weapons would be used to target Chinese airfields and logistics hubs, “increasing even further the firepower for Taiwan’s defense [为台湾防务提供更多的火力].” Fortunately, all these weapons were removed by 1974, along with the rest of U.S. military deployments and bases on Taiwan, as specified in the Shanghai Communique. That document also said, of course, that “The United States acknowledges that all Chinese on either side of the Taiwan Strait maintain there is but one China and that Taiwan is a part of China. The United States Government does not challenge that position.” Yet somehow, these commitments are routinely ignored by American strategists and diplomats these days, which is a major problem for the emergence of the pragmatic, cooperative U.S.-China relationship that the world needs so badly to deal with myriad, vexing global problems.

But, from a realist perspective, what matters most is the actual balance of power. Diplomatic commitments and historical vignettes can be fascinating and relevant, to be sure, but power is ultimately determinative. For insight on that particular question, we may look briefly at an interview with Yang Shaoqing, a leading Chinese mainland defense engineering expert on the subject of rocket artillery. He explains that this capability combines “quick reaction, sudden firepower, and massive force [反应快, 活力猛, 威力大].” Noting that this platform [AR3] fires not a “missile [导弹],” but rather a “guided rocket [指导火箭],” Yang says any accuracy issue has been resolved.

However, what could be decisive is really the cost of these rockets, which is comparatively low. That means China can build these systems “like sausages,” hide them in underground facilities or innocuous-looking garages and prepare to administer a fatal blow to Taiwan at short notice. The 290km range listed in the Yang interview is quite sufficient to blanket all targets in Taiwan and, the volume of rocket salvos would easily overwhelm missile defenses. These firepower effects, therefore, can be achieved without even resorting to deploying the main missile forces of the Second Artillery or the rapidly modernizing PLA Air Force, not to even mention the PLA Navy. Those formidable components can be held in reserve for deterrence and “mopping up.”

Unfortunately, Taiwan’s many advocates in this country refuse to bother with military details. I have demonstrated in a previous article that the latest round of “happy talk” on the military aspects of the Taiwan scenario is patently absurd. Nor does the plethora of Taiwan proponents in Washington seem well versed in the relevant history—some of which can be found in Pareino’s skillful and balanced historical account A Force So Swift. What Taiwan advocacy amounts to today, dressed up as always in the luminous garb of humanitarian or democratic impulses, is actually “bad friend syndrome,” placing the people of Taiwan under the extraordinarily grave (and quite unnecessary) risk of attack.

Maybe we strategists should return to the days of “Massive Retaliation” and install (once again) U.S. tactical nuclear weapons all over the “beautiful island?” That is plainly a risky and unpalatable path forward, to put it mildly. It’s almost as silly and ahistorical as the now fashionable idea that Britain and France will make a glorious return to the Pacific in order to keep the “upstart dragon” in its corner. As for the notion that America will sail to the rescue of Taiwan, this possibility becomes increasingly far-fetched and even downright farcical. A far more responsible approach for the people of Taiwan, and the rest of the world too, would be to urge Taipei to sincerely pursue a compromise with Beijing and so finally end the exasperating Chinese Civil War.