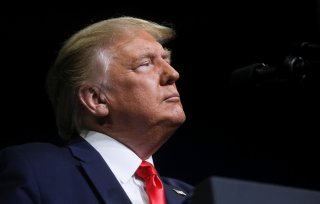 President Donald Trump likes to portray himself as fighting the Washington Swamp. In foreign policy, he represents something new, America First, a break with interventionism and globalism. But the substance of his foreign policy has been largely at odds with his rhetoric. Making key appointments he has repeatedly turned to people on record as having the opposite of his stated views, interventionists like H. R. McMasters, Elliott Abrams, John Bolton, Robert O’Brien, and Mike Pompeo. He then fights with them to moderate their hawkishness.

This is just one example of the curious incoherence of the Trump presidency. The president has managed thoroughly to offend the Washington establishment, sending Democratic leaders and the media into paroxysms of outrage. Yet there is a striking element of overlap between Trump and his enemies and predecessors. In important ways, he is defaulting to the same old same old, possibly because people in his vicinity keep pushing him in that direction.

The president’s primary purpose at Mount Rushmore was to leave no doubt as to how he views attacks on monuments, civil disturbance, looting, and vandalism. He probably was quite successful conveying to the American people why none of this can be tolerated.

While most listeners probably did not pay close attention to the president’s extended argument for why America’s heritage must be defended, the speech was in this respect another example of the inconsistency of the Trump presidency.

The speech’s overall message regarding the worthiness of America was virtually indistinguishable from the “idealistic” sentiments that neoconservatives and other exceptionalists have expressed in recent decades to promote American intervention and, in particular, to create momentum for war with Iraq. Their fundamental idea, simply put, is that America is—here we go again—exceptional. America is God’s gift to mankind, and America is in a position to work marvels for humanity. These notions have formed the core for what this writer has called “the ideology of American empire.”

Over the past several decades, American exceptionalism has served as the primary justification for the push for American armed global hegemony. The speech at Mount Rushmore was in its appeal to these sentiments remarkable only for its lack of originality. The president was careful to say: “We declare that the United States of America is the most just and exceptional nation ever to exist on Earth.”

Standard fare, you say? Precisely. But how does it square with criticism of interventionism?

Untutored and ill at ease in the world of ideas, Trump, like President George W. Bush before him, seems to have signed on to what speechwriters put before him. That it did not occur to him or his speechwriters that some other way of defending America’s heritage might be preferable indicates the continuing deep influence of the ideology of the American empire. Is any other defense of America even conceivable?

Having told Americans that “you live in the most magnificent country in the history of the world,” Trump did for a brief moment violate one central tenet of exceptionalist ideology. He said that 1776 represented “the culmination of thousands of years of Western civilization.” That sentence suggested that America was the creature of many generations, a product of history—which flatly contradicts the exceptionalist assertion that America was founded on newly discovered abstract, ahistorical principles that gave Americans a fresh start.

But the president quickly contradicted himself by asserting, as neoconservatives and their academic supporters think others ought to do, that America was born out of revolution. For exceptionalists, it is irrelevant what was actually on the minds of Americans when they protested British rule. The colonists were upset that the British government was introducing radical innovation. What the colonists wanted was respect for long-established traditions. As could have been predicted, the U.S. Constitution became a reaffirmation and creative development of a Western heritage that stretched all the way back to Rome and Greece.

But, no, exceptionalists insist, America must be understood as rejecting the bad old days of history and as based on abstract universal principles. Since these principles belong to all peoples, America must help liberate them. For these ideologues, the Declaration of Independence is not a lengthy, elaborate list of American grievances for British violations of the rights of Englishmen and long-standing practices, but consists of the few introductory phrases about “equality” and “happiness” penned by one who was strongly attracted to French revolutionary ideas.

American exceptionalism can be studied in pure form in the thought of the late Harry Jaffa, an influential disciple of Leo Strauss. The latter declared that only abstract “natural right” has any moral authority and is always in conflict with tradition. “To celebrate the American Founding,” Jaffa writes, “is to celebrate revolution.”

And what does Trump believe? In his Mount Rushmore speech, he said that “Our Founders launched not only a revolution in government, but a revolution in the pursuit of justice, equality, liberty, and prosperity.” In apparent agreement with the exceptionalist idea that America must promote its universal principles around the globe, he praised Teddy Roosevelt for recognizing “the towering grandeur of America’s mission in the world.” Roosevelt “sent our great new naval fleet around the globe to announce America’s arrival as a world power.”

“Americans,” the president said, “are the people who pursued our Manifest Destiny across the ocean, into the uncharted wilderness, over the tallest mountains, and then into the skies and even into the stars.” He added that “we will teach our children . . . that nothing can stop them, and that no one can hold them down.”

One might defend this aspect of Trump’s speech by saying that at this time of upheaval he has no choice but to appeal to sentiments that the American public thinks have a familiar, uplifting, and self-applauding sound. Yet this dubious American ideology has been tremendously costly for America in every sense of that word. It is a measure of the pervasiveness of this unctuous idealism that even the Great Disrupter should want to employ its rhetoric. It does go well with his foreign policy appointments.

Claes G. Ryn is Professor of Politics and the Founding Director of The Center for the Study of Statesmanship at the Catholic University of America. His many books include America the Virtuous and A Common Human Ground: Universality and Particularity in a Multicultural World, now in an expanded paperback edition.