Did Zelenskyy Call for International Strikes on Russia? 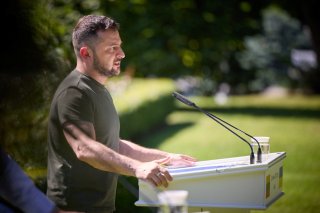 Ukrainian president Volodymyr Zelenskyy called for a preemptive strike against Russia in a Thursday speech. “But what is important, I once again appeal to the international community, as I did before February 24 – we need pre-emptive strikes, so that they’ll know what will happen to them if they use nukes, and not the other way around,” he said. “Don’t wait for Russia’s nuclear strikes, and then say, ‘Oh, since you did this, take that from us!’ Reconsider the way you apply pressure. This is what NATO should do – reconsider the order in which it applies pressure [on Russia].”

Kyiv officials have since claimed Zelenskyy’s words were misquoted by the media. “The president spoke about the period before February 24. At that time, it was necessary to apply preventive measures to prevent Russia from starting a war. Let me remind you that the only measures that were discussed at that time were preemptive sanctions,” wrote presidential press secretary Serhii Nykyforov. Yet the explanation does not track with the Ukrainian president’s own words— by any reasonable interpretation, Zelenskyy was exhorting members of the “international community” to strike Russia now so that they do not repeat what he sees as the mistakes of prewar times.

Far from a gaffe, the sentiment behind Zelenskyy’s Thursday appeal has been a consistent part of Kyiv’s policy position since the war began. Top Kyiv officials—up to and including Zelenskyy—pleaded with Washington for months to impose a no-fly zone over Ukraine, a move that would have almost certainly drawn the United States into a shooting war with Russia. The Zelenskyy administration likewise continues to demand Ukraine’s immediate accession to NATO, which would presumably oblige the alliance to intervene on the ground in Ukraine against the invading Russian forces.

Zelenskyy’s appeal for a preemptive strike on Russia comes on the heels of a bombshell New York Times report claiming that Russian journalist Daria Dugina’s death in a Moscow car bombing attack was orchestrated by elements within the Ukrainian government. U.S. officials reportedly admonished their Ukrainian counterparts over the killing, which they say does not serve legitimate Ukrainian battlefield objectives and risks provoking retaliatory Russian strikes against Kyiv officials.

Taken together, the events of the past week put a renewed spotlight on subtle-but-significant divergences of interest between Kyiv and Washington. The Ukrainian leadership, locked in what it sees as an existential war for the survival of Ukrainian nationhood, has signaled that it will tolerate any risk and bear any cost in the name of total victory over Russia. The White House, though heavily invested in Ukraine’s success, has drawn strict military and political boundaries intended to prevent nuclear escalation and to keep the conflict from spilling over into a wider conventional war on the European continent. Even as Zelenskyy pushes the West to commit what is de jure an act of war against Russia, top U.S. officials are privately and publicly expressing concerns that the Russo-Ukrainian War could erupt in a catastrophic nuclear spiral. “First time since the Cuban missile crisis, we have a direct threat of the use (of a) nuclear weapon if in fact things continue down the path they are going,” said President Joe Biden on Thursday during remarks given at a Democratic fundraiser. “I don’t think there’s any such thing as the ability to easily use a tactical nuclear weapon and not end up with Armageddon,” he added, referring to reports that Moscow could use low-yield nuclear weapons in Ukraine to regain the upper hand amid continued setbacks to its war effort.

Vladimir Putin marked his seventieth birthday on Friday against the backdrop of what even pro-Kremlin voices in Russian media and politics recognize as a difficult situation on the ground in Ukraine. Moscow does not fully control any of the four Ukrainian regions it annexed last month—Ukrainian offensives in the east and south have been partially successful in slowly pushing Russian forces back. Seven months into the war, the Kremlin appears to be as far removed from achieving its major wartime objectives—including the unconditional capitulation of the Zelenskyy government and drastic degradation of Ukraine’s long-term military capabilities—as it has ever been.

Yet the Russian leader has shown no indication that he is so much as contemplating the possibility of withdrawing from Ukraine in the face of mounting military and economic costs. To the contrary, Putin has demonstrated in word and deed that he is grimly determined to see the invasion through to its bitter end. Over the past month, Moscow has mobilized 300,000 qualified reservists, re-oriented its defense industry for protracted conflict, insisted that discussions over the status of its newly-annexed territories are off-limits, and signaled a willingness to use nuclear weapons if its core security interests are threatened.

The events of the past several weeks show that the war has entered a dangerous new phase, sparking fresh calls for de-escalation. “It is high time to step back from the brink,” said UN secretary-general António Guterres in remarks condemning Russia’s annexation plans. “Now more than ever, we must work together to end this devastating and senseless war and uphold the UN Charter and international law.”

Tech billionaire Elon Musk took to Twitter to float a peace formula involving the recognition of Russian-controlled Crimea, a UN-supervised redo of referendums in the four regions annexed by Russia, and a guarantee of Ukrainian neutrality.

Musk’s proposal is an updated and somewhat more involved variant of the peace plan unveiled by Henry Kissinger earlier this summer. Though they differ on details of execution, they are premised on the same underlying assumptions: there is no military solution to the human tragedy unfolding in Ukraine, and policymakers must abandon ill-conceived dreams of peace through total victory in favor of serious diplomatic engagement. The coming negotiations are sure to be difficult, but the looming alternative—a head-on collision between the world’s two largest nuclear powers—is unthinkable.