The Disappearing Plight of Syrian Christians 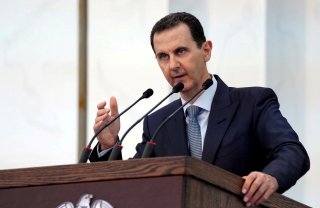 For more than a decade, Syria has been ripped apart by bullets and barrel bombs, division and destruction. While the endangerment of Christians from neighboring Iraq has garnered much international attention, little is said about its slow erasure in the neighboring Syrian cradle of civilization.

The population of Syria's Christian community has wavered since the country achieved its independence from France in 1946. Up until the late 1960s, Christians accounted for an estimated 30 percent of the population. By the time war erupted amid the 2011 Arab Spring, that figure had dwindled to ten percent.

What now remains is left to wild interpretation.

Christian numbers have dropped from 2.2 million before the war to less than 677,000 now, according to the Index of Persecution of Christians in Countries Worldwide, published by the NGO Open Doors.

“The regime is not a minority protector. They are using that card to bargain, bring aid and manipulate the West—especially the conservative Christians,” insisted Ayman Abdul Nour, a Syrian defector, economist and president of the non-profit Syrian Christians for Peace. “At the beginning of the war, many Christians were pro-Assad. But after about four or five years, they realized he will not protect.”

Nour estimates that the Christians now make up less than five percent of the Syrian population, falling from around 900,000 pre-conflict to less than 400,000 today. Nonetheless, Syria bestows a special place in biblical texts. The “Road to Damascus” is the whimsical site where Apostle Paul converted to Christianity on the journey from Jerusalem and in villages such as Ma’loula—an age-old sanctuary dug into a cliff on the mountaintop where residents still speak Aramaic, the language of Jesus.

But the rich history risks coming undone. Once deemed a haven from turmoil, many ancient Churches have been blown to bits or left in pockmarked peril. Last month, Bashar al-Assad declared himself—much to the dismissal of the international community—the winner of a fourth presidential term, following in the footsteps of his father Hafez Assad, who presided for almost thirty years. The “victory” prompted a swell of loyalists—including a number of those in Syria’s Greek Orthodox community—to take to the streets in celebration.

Yet for the many beleaguered Syrian-Christians who escaped war, this means there is little hope of returning anytime soon. However, Assad’s tenure has also been fraught with complicated allegiances for Christians, given that Damascus prides itself on being a protector of the Christian minority.

Assad’s public stance as a Christian defender is enhanced by the notion that he, too, is a minority, belonging to the offshoot Shia Islam sect known as the Alawites. This group makes up roughly seventeen percent of the population. Sunni Muslims are the majority, accounting for around 74 percent of the dwindling population.

By illuminating the threat of the multitude of extremist, hardline terrorist outfits operating on Syrian soil, the president portrays himself as something of the protector to the Christian community. Such a position was further magnified by the rise of ISIS in large swaths of the country some eight years ago. Assad's ally Russia has additionally ramped up its role as a purported protector of Christianity,

“Many Syrian Christians support Assad because they believe he is merely the safest option, that the alternative is the Islamists and that would be worse for Christians. Others find the system Assad maintained manipulative, one which promised false protections,” explained Claire Evans, regional manager-Middle East for International Christian Concern. “Ultimately, Syrian Christians are put in a very difficult position. Whatever they believe politically, they will be penalized by someone. It is a question of having to make the personal choice of who do I want/need protection from; thus, it is a system unfair from the beginning.”

Nonetheless, Syrian human-rights activists are quick to highlight that the lives of the vast majority of Christians have been upended due to the Assad regime rather than terrorist outfits.

At least 124 attacks were documented against Christian places of worship by the main parties in Syria between March 2011 and September 2019. Seventy-five of these were at the hands of Syrian Regime forces, ten at the hands of ISIS, while Hayat Tahrir al-Sham (linked to Al Qaeda) was responsible for another two attacks.

The report additionally emphasized that the weapons arsenal belonging to Assad’s forces has caused the most significant damage to buildings and contents compared to other armed opposition factions.

“Targeting Christian places of worship is a form of intimidation against the Christian minority in Syria and a means of displacing them,” the report indicated, further highlighting that the Damascus leadership “is indifferent to the damage which this causes to the Syrian state, including the nation’s millennia-old history and civilizational heritage that has passed through Syria down the ages places of worship.”

“Those still supporting are mostly doing so due to fear,” stressed Fadel Abdul Ghany, the founder and chairman of SNHR. “There is no atmosphere for freedom.”

Other human-rights advocates also point out that Christians are certainly not exempt from the same fate that befalls any other Syrian that vexes the government—and are also routinely subject to arbitrary imprisonment, forcible disappearance, and caught in the crossfire of conflict.

Now amplifying their plight is the precarious conditions now permeating the parcels occupied by Kurdish and opposing Turkey-backed forces.

Sustained fighting in the northeast has meant that churches and villages occupied by Christians have become a further cause of displacement. Moreover, the worsening economic conditions and poverty induced by the coronavirus pandemic have made the situation unbearable for Syrians—further driving those who have held on this long to escape.

It remains to be seen just how low the numbers will go in the coming months and years and what role the United States will play in preserving Christianity in his ancestral home.

“The guns have fallen silent. The war is over. However, the economic crisis has increased, not least because of the international sanctions, particularly American, which are hitting Syria hard. As always, these kinds of sanctions hit the population first before hitting the leaders,” vowed Benjamin Blanchard, director of the Syria-based SOS Chrétiens d’Orient. “The sanctions are driving the immigration of Syrians, especially Christians, since, in any crisis, minorities are the most fragile, the most sensitive. They are the ones who leave the most, continuing to immigrate. This is a huge problem.”

Hollie McKay is a writer, author, and war crimes investigator. She previoulsy worked as a reporter for Fox News.