Do Americans Support Foreign Aid If It Curbs Illegal Immigration? 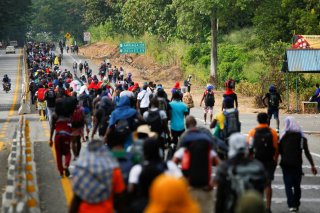 Could more international aid help alleviate this problem? The Biden administration recently announced a new plan that would provide $4 billion in aid for Central American countries. The aid will focus on reducing poverty, corruption, violence, and adapting to climate consequences to staunch undocumented immigration inflows. Proponents of foreign aid argue that it responds to the root cause of undocumented immigration by focusing on stabilizing countries and economic development. Data from twenty-two countries and over one hundred and fifty recipients across twenty-five years suggests strong support for foreign aid deterring immigration. Many European countries have previously used foreign aid to reduce immigrant inflows. However, some studies have found that aid has no impact or worse can increase undocumented immigration. Yet, many of these studies focus on theoretical equilibrium models rather than real data.

Public support for international aid also remains mixed, with overall support ranging anywhere between 50-60 percent in recent years. However, 69 percent and 66 percent of Americans see military and economic aid, respectively, as an effective means of conducting foreign policy. This remains true despite the fact that the public prefers budget cuts on foreign aid spending rather than cuts to domestic programs. The contrast of Americans supporting concepts of, but not wanting to pay for, foreign aid stems from their tendency to overestimate the percentage of the federal budget allocated to it. Additionally, wide partisan gaps emerged during the Trump administration’s “America First” era of foreign policy even though foreign aid has historically been bipartisan. For instance, a Chicago Council poll conducted in 2017 found that only 53 percent of Democrats and 33 percent of Republicans thought that foreign aid helped national security. The same poll found that support for foreign aid significantly increases when aid is described in a mission-specific manner as opposed to broad categories. In other words, aid that goes towards “feeding the poor” or for “promoting democracy” generates more public support than simply labeling the efforts as “developmental aid.”

Despite the potential linkage between increasing international aid and decreasing undocumented immigration, previous work has not addressed whether the American public would be supportive of such measures. We conducted an original web survey from November 10-12 via Qualtrics, using quota sampling for age, gender, and region. We asked 1,007 Americans “Would you support increasing foreign aid if this would lead to a decrease in undocumented immigration into the US?” We find a majority of respondents supportive of increasing aid (57.10 percent) with clear differences between Democrats (69.20%) versus Republicans (50.97 percent). 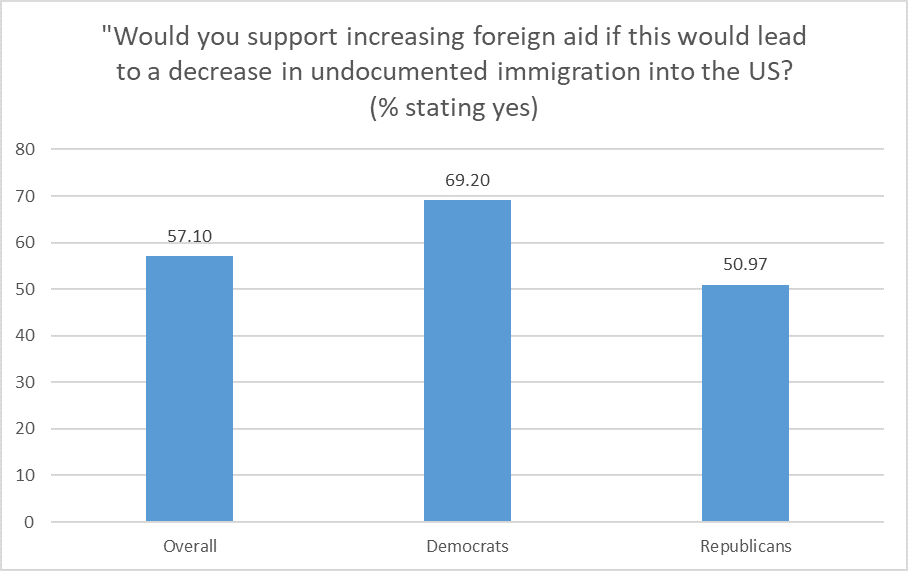 We also asked respondents to rate their concern about various domestic and international issues on a 5-point scale, with 1 being not at all concerned and 5 being very concerned. Included, among other topics, were “undocumented immigration,” “the national debt,” and “the global decline of quality in democracy.”

We found 52.14 percent of respondents rated immigration a 4 or 5 on the scale. However, these respondents were only marginally more likely to agree with increasing aid (56.76 percent) versus those that rated immigration a 1 or 2 (53.20 percent). In contrast, those concerned about the national debt were far more likely to support increasing aid (61.01 percent) compared to those least concerned (43.21 percent). A similar pattern emerges when split over concern about quality in democracy (61.89 percent vs. 47.80 percent). Both are consistent with respondents not seeing the issue of immigration in a vacuum.

Regression analysis that controls for gender, age, income, education, and partisan identification again finds that immigration concerns do not correspond with support for increasing aid if it would decrease undocumented immigration.

Admittedly, our survey did not ask about general support for international aid, although previous research finds Republicans less supportive of aid in general compared to Democrats. Many Democrats may already support foreign aid with reduced immigration inflows seen as an added benefit. However, many Republicans may be skeptical that foreign aid produces anything but costs. Nevertheless, that a slim majority of Republicans would support increasing aid if it reduced undocumented immigration suggests a means to bipartisan support. The results suggest that the Biden administration could specifically frame international aid as a means to alleviate, at least in part, the pressures of undocumented immigration. This manner of framing policy would directly appeal to Americans’ inclination to support aid designated for specific purposes while blurring the distinction between foreign aid and domestic policy on immigration. However, it remains unclear whether $4 billion in aid would be sufficient to have a noticeable effect on immigration, much less one that the public would identify as a result of aid.

Timothy S. Rich is an Associate Professor of Political Science at Western Kentucky University and director of the International Public Opinion Lab (IPOL). His research focuses on public opinion and electoral politics.