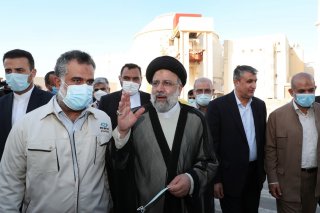 Iran is running an elaborate nuclear shell game. While vaguely promising to resume negotiations over its nuclear program, it repeatedly stokes fears about its progress enriching uranium. Recently, for example, Tehran announced it now has 120 kilograms of 20 percent enriched uranium, dangerously close to the quantity needed, with further enrichment, for a nuclear weapon.

But such declarations are mere bluster meant to extract U.S. concessions and obscure serious setbacks in Iran’s nuclear program.

Iran has claimed major enrichment breakthroughs three times this year. In April, it took the unprecedented step of producing 60 percent enriched uranium, just below the level needed for a nuclear warhead. Tehran then audaciously overstated its 20 percent stockpile in June, followed by last week’s alarmist claim.

Yet, the latest International Atomic Energy Agency (IAEA) data indicates Iran’s output of 60 percent uranium is too small, for now, to significantly reduce the time required to produce fissile material for a nuclear weapon. It had far less 20 percent uranium in June than it asserted. Its latest claim of 120 kilograms of 20 percent enriched uranium is misleading since it continually diverts this stockpile for uranium metal, thereby rendering it unsuitable for further enrichment. At current rates, it won’t have a bomb’s worth of either 60 or 20 percent uranium until mid-2022 at the earliest.

Iran is being deceptive because its enriched uranium stockpiles are the easiest metric of progress toward a bomb. By exaggerating them, Tehran hopes to scare the Biden administration into paying any price to keep it from crossing that dangerous threshold. Just days before its latest misrepresentation, Tehran suggested Washington should release $10 billion in frozen Iranian funds before it would resume negotiations.

Even though the Biden administration has refused such payments, Secretary of State Antony Blinken has warned there is only a “limited runway” that is “getting shorter” to prevent a nuclear Iran. Such statements likely suggest to Tehran that its ruse is working as intended, with Washington growing desperate enough to accept any deal as soon as possible.

Tehran also hopes its enrichment claims obscure serious setbacks in other key areas of its nuclear program stemming from three covert attacks since July 2020. The most serious of these knocked out several thousand rudimentary IR-1 centrifuges at Iran’s Natanz facility in April 2021.

Following that attack, Iran initiated ambitious plans to triple its enrichment output by replacing the destroyed IR-1s with thousands of more advanced centrifuges. According to a new JINSA analysis, by late August it was operating enough of these new machines to negate the setbacks from April’s explosion. This installation of large numbers of advanced centrifuges, not slowly growing uranium stockpiles, has been driving Iran’s real and dangerous nuclear progress.

But now Tehran is reaching a new roadblock: It is struggling to build more centrifuges. A July 2020 attack destroyed a centrifuge production site near Natanz; one recent assessment suggests this facility won’t be online until 2023. Just days after the last Vienna negotiations concluded in June, another attack significantly damaged the Karaj centrifuge plant.

For now, while relying primarily on surplus IR-1s, Iran can only expand its enrichment capacity incrementally, at best.

This offers the United States precious time to build bargaining power while avoiding a rush back into a bad deal. The Biden administration should put negotiations on hold and focus instead on restoring its leverage over Tehran.

This means preparing alternatives to the Joint Comprehensive Plan of Action rather than reentering talks and letting Iran play for time to reconstitute its centrifuge production capacity. The Biden administration should build on its own declarations that its ability to wait is “not indefinite” and “if diplomacy fails, we’re ready to turn to other options” by making those options clear. A good start would be reiterating President Barack Obama’s 2009 assertion that “all elements of American power” are on the table for preventing a nuclear Iran.

The Biden administration also needs to credibly strengthen the military elements of that power. This includes measures to enhance readiness, like updated contingency plans for operations against Iran’s nuclear sites, deploying strategic airpower to Diego Garcia in the Indian Ocean, and conducting relevant military exercises with regional allies.

The White House also must forge ahead with Israel on a “Plan B.” This will entail backing its ally’s freedom of action, which has done more than negotiations or sanctions to tangibly extend the runway between here and a nuclear Iran. Top priorities are ensuring prompt transfer as Israel procures key capabilities like aerial refueling tankers and fighter aircraft, and ensuring an adequate supply of precision munitions.

Rather than falling for Iran’s con, the United States should make it clear to Tehran that time is not on its side.

Blaise Misztal is the vice president for policy at the Jewish Institute for National Security of America. Twitter: @BlaiseMisztal.

Jonathan Ruhe is the director of foreign policy at the Jewish Institute for National Security of America. Twitter: @JCB_Ruhe.