Don’t Leave Economics Out of Competition With China 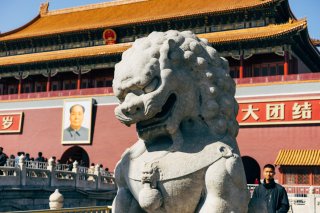 WASHINGTON’S CONDUCT of a proxy war against Moscow in Ukraine has given many in the American capital that heady feeling of leading again. Against the backdrop of the Russia-China joint statement in February, the world appears to be dividing along the very lines that President Joe Biden discerned in his speech to the Munich Security Conference in February last year, when he said that global affairs were at an “inflection point, between those who argue that … autocracy is the best way forward … and those who understand that democracy is essential to meeting those challenges.”

Biden’s was the latest in a long line of American presidential statements since 1945 depicting a worldwide struggle to defend freedom from its ideological enemies. The difference this time lay in his attempt to restore American credibility abroad after the successive shocks of the Trump presidency, when U.S. allies in Europe and Asia were made to feel expendable by Washington. The multilateral system America had built for the postwar world was subjected to heavy strain.

The present challenges in Europe and Asia only intensify the readiness of some in Washington to adopt the idea of a “New Cold War,” even as the administration explicitly says this is not what it seeks, especially with Beijing. The adoption of this terminology stirs powerful memories. But it would be a mistake to equate America’s swift and successful marshaling of sanctions against Russia as vindication for Biden’s framing of the world situation. One need only consider the stances taken by New Delhi and Jakarta on Ukraine to see how limited that framework is for a complex world. Washington is going to have to come to grips with the reality—and fast—that its conduct of this “New Cold War” will require as much a pragmatic, cynical, and at times, amoral approach as did its antecedent.

The administration has been at pains to emphasize since coming to office that it is broadly in step with Donald Trump’s China policy. Despite the current European crisis, it keeps saying that China remains its overwhelming priority. The White House knows, too, how easily another set of memories—that of a distracted Washington taking its eye off Asia due to priorities elsewhere—can be aroused. It does not want a repeat of the scramble in 2011 when the Obama administration had to consistently define its “pivot” or “rebalance” to Asia.

This White House is all too aware that its “Asia first” rhetoric needs to be backed up both by its presence and its policy. Yet at present, it is only getting half that equation right. Washington is certainly showing up in the region: at the very time tensions were escalating between Washington and Moscow over Ukraine in February, for example, Secretary of State Antony Blinken attended a meeting of Quad foreign ministers in Melbourne. Then, a high-level delegation of former U.S. officials traveled to Taiwan in a declaration of support and to encourage Taipei to shore up its defenses. And in May, President Biden hosted a summit in Washington of Southeast Asian leaders in an attempt to signal once more that the United States was ready to re-engage. Biden then visited South Korea and Japan, where he participated in another Quad leaders meeting, what his secretary of state, in a major speech on China policy, termed the “leading regional team.”

Biden’s Asia policy “tsar,” Kurt Campbell, also made a forlorn trip to the Solomon Islands in May shortly after its prime minister signed a formal security arrangement with Beijing. Whether that agreement represents a pattern of future Chinese foreign policy in the region—where China believes it has the right to send in its police to protect both its investments and diaspora communities—remains to be seen. But Beijing, even though recently rebuffed over a security agreement with over ten Pacific countries, will keep pushing. How Washington and its allies respond to this strategic lunge into the region may well define the second half of Biden’s term. In the case of the Solomons, Washington must be wondering how its close ally in Canberra allowed Beijing to get a foothold so near the Australian coastline.

Washington’s regional pitch, then, is clearly not enough. The summit with Association of Southeast Asian Nations leaders produced only a modest commitment of $150 million for maritime security, clean energy, and an anti-corruption drive. As the Financial Times’ Ed Luce has argued recently, Washington is conducting strategic competition with China in the region with “one arm tied behind its back.” As it plants a heavier military tread, its economic footprint continues to shift in the sand. Or, as Paul Haenle at Carnegie China remarked, “the risk is that the optics in the region become the US coming to the table with guns and ammunition and China dealing with the bread-and-butter issues of trade and economics.”

The administration’s Indo-Pacific Economic Framework (IPEF) is a start, and administration officials are reportedly enthused by the initial response from those countries inside that tent. But it will struggle to present a viable alternative to the Regional Comprehensive Economic Partnership (RCEP) or the trade agreement that its regional allies want Washington to desperately reconsider—the Comprehensive and Progressive Trans-Pacific Partnership (CPTPP). Moreover, the IPEF appears to assume that Washington’s partners share its objective of excluding China from regional economic and technology networks. Initial reports, too, suggest that a major drawback of the IPEF in regional eyes is its inability to offer new access to the American market for Asian countries.

This Asia first focus will face other challenges—namely, the potential for a weakened Biden administration after what may well prove a demoralizing result for the Democrats in the midterm elections. That might only strengthen the voices in Washington arguing for a tougher stance on China and a surer commitment to the defense of Taiwan. Yet even as the very concept of “strategic ambiguity” frays due to unscripted comments from the president, the administration’s top diplomat stresses that it is prioritizing “crisis communications and risk reduction measures with Beijing” to prevent competition from descending into conflict.

Given the domestic turmoil that will likely accompany the race towards the next presidential election, time is running out for the president to bed down his China policy with a more integrated approach that rebuilds America’s economic credibility in Asia.

James Curran is Professor of Modern History at Sydney University and a former Australian intelligence analyst. His new book, Australia’s China Odyssey: From Euphoria to Fear, will be published this August.