Don’t Rule Out Intervention in the Solomon Islands 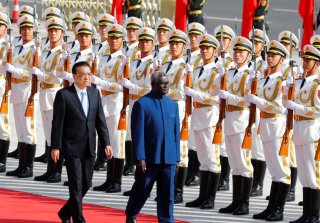 The principle of self-determination—that people have a right to rule themselves without foreign interference—was first espoused in 1860. The Atlantic Charter, signed by the Anglo-American powers as the basis of the United Nations on August 14, 1941, enshrined self-determination as its third principle. It is a fundamental legitimation of the sovereign and territorial nation-state, a system of political organization borne out of the religious tumult of the Thirty Years’ War in Europe and codified in the 1648 Peace Treaty of Westphalia. Consequently, the military occupation of a country is usually widely condemned in the international system by other states seeking to protect their right to independence.

However, the coalition of democracies has two legally and morally valid justifications for intervention in a foreign country. The first is when there is a dire security threat that emerges within its sphere of influence. The second is because liberal democracies have an unprecedented understanding of the world population’s aspirations for human rights-based rule of law and innovation-based prosperity for middle-income countries. Moscow and Beijing’s fear of Western-inspired democratic revolutions is a key disruptive advantage of the coalition of democracies, and it is a measure that their policies are moving in concert with the broader direction of history.

So, what can be done when a sovereign state chooses to ally with a hostile foreign power and provides it the opportunity for a base of operations? This is precisely what happened in the Solomon Islands on April 19, when Prime Minister Manasseh Sogavare signed a security treaty with Communist China. A leaked draft indicates that Beijing is entitled to send military personnel to the islands to assist the regime and protect its assets and personnel, and the Chinese Navy may use the islands for naval replenishment of its warships. Sogavare indicated without detail that his country’s prior bilateral security treaty with Australia was inadequate.

Sogavare’s antipathy to Australia is not grounded in any ideology, but rather in his reaction to its interference with his political activities, which include alleged corruption. Sogavare is an experienced legislator, and his occasional tenure over the last twenty years has been legal by the chaotic standards of his political adversaries. However, his appointment and decisions have been accompanied by popular riots, primarily from the Taiwanese and U.S. financially supported autonomy-seeking Malaitan minority. Sogavare’s reliance on China for domestic law and order is therefore individually rational, even if it is diplomatically provocative. He clearly demonstrated his Western antipathy by his absence from the August 2022 Second World War Memorial.

The problem is that the Solomon Islands, along with Vanuatu, Kiribati, Fiji, and Tonga, form a geopolitically strategic Melanesian barrier between Australia and Polynesia to the north. In the waters north of Guadalcanal, known as Iron Bottom Sound, the Imperial Japanese and U.S. navies lost over fifty warships, including seven cruisers, over the course of five hotly-contested naval campaigns over the islands between August 1942 and April 1943. The Japanese and Americans also lost two and three aircraft carriers, respectively, during campaigns to secure the strategic Solomon Islands. These islands would not easily be bypassed in a general conflict with China. No land-based anti-ship missile battery has ever been confirmed to have been destroyed from the air or sea. Marines would need to be painstakingly landed to clear the islands of these missile bases. Supporting land-based airpower is also a fraction of the cost of the equivalent of carrier-based aircraft, and it is considerably less vulnerable. There were concerns about a Chinese presence in Vanuatu in 2018, and there is currently an issue about Chinese interest in an airstrip in Kiribati. The hosting of Chinese land-based missiles, aircraft, or ships by the Solomon Islands is therefore gravely dangerous.

Interference with the domestic affairs of a sovereign country is against international law, which is grounded on the foundation of a rules-based international order. Great power restraint depends on international law being so used as to best compromise on conflictual interests. The absence of a rules-based resolution system is great power politics. In History of the Peloponnesian War (written around the fifth century BCE), a seminal work on international politics, Thucydides quotes the Athenians’ reminder to their Melian adversaries that “the strong do what they can, and the weak do what they must.” Specifically, great powers pursue policies limited by their power, and small powers must adapt, within the limits of their power, in order to survive. When small states flaunt the international order, they are threatening not only the great powers but the rules-based international system that is their primary protection. By threatening the United States and Australia with its alliance with Beijing, the Solomon Islands is risking a power confrontation over its sovereignty. There is an unwritten norm in international politics that states respect power.

Modern liberal democracies do not engage in wars against each other for three reasons. First, democracies are governed by wealthy middle classes that do not want to pay the cost of confrontation. Second, liberal democratic citizens are reluctant to fight other liberal democratic countries when cosmopolitan law allows them to trade with minimal corruption. Third, they have a history of interactions that have led them to prefer a legal solution to disputes. The Solomon Islands is, by contrast, a developing country prone to domestic instability, which leads to authoritarianism and hostile foreign policies. It satisfies none of Robert Dahl’s seven criteria for democracies: rule of law, regular elections, universal adult suffrage, the right to be candidates, freedom of expression, alternate information, and freedom of association. 90 percent of the Solomon Islands population is engaged in subsistence agriculture. The capital of Honiara has a population of 95,000, and 90 percent of the remaining 650,000 citizens live in widely dispersed rural communities of 200 persons or less.

An attendant problem is that economic underdevelopment creates political instability that invites foreign involvement. The politicians of illiberal democracies are prone to eventual authoritarianism, leading them to seek authoritarian sponsors, such as Nazi Germany, the Soviet Union, or Communist China.

Since independence in 1978, the Solomon Islands has suffered from the violent political instability commonly associated with economic underdevelopment, low levels of education, weak rule of law, high levels of corruption, and tribalism. The eruption of ethnic conflict between the local Isatabu of Guadalcanal and the Malaitans in 1998 conflagrated into a civil war and the violent overthrow of the government in 2000, culminating in an armed intervention by an international force led by Australia in 2003. If the Solomons possessed a formal military, it would have suffered numerous coups in the fashion of Fiji or Guyana. Political factionalism nevertheless managed to turn the police force into militia gangsters. High unemployment and an influx of misguided foreign aid helped sustain the violence until the state’s complete institutional collapse into criminality. In 2006, violence erupted against the Chinese minority, and there was a return of foreign intervention until 2017, with another resumption of violence and the return of Australians in November 2021.

However, neither Australia nor the United States should suggest that there is an economic imperative for intervention. Any policy should place a strict focus on security threats and thereby sidestep the frequent counter-argument about the economic benefits of a mainland Chinese presence to the local populace. In fact, it can be conceded that the Chinese model of authoritarian capitalist investment, or Communist Cuban-style collectivist development, like that in Nicaragua or Grenada, is more efficient at bringing prosperity to severely underdeveloped countries. It is true that tribalism, religious nationalism, and ethnic minority insecurity led to the defeat of the Western campaign in Afghanistan and caused the war in Ukraine, as these are issues not well understood by the Western public.

The U.S. Cold War experience in Latin America is instructive. Despite allegations of persistent neo-colonial motives for CIA involvement in Central America and the Caribbean during the Cold War, U.S. policy was in fact mostly one of erroneous restraint. Following the 1954 CIA intervention against the Guatemalan regime, the United States failed to act decisively against Cuban insurgents before they consolidated the international backing of the Soviet Union. The United States foolishly conceded to Cuban leader Fidel Castro’s promise of future democratic elections. U.S. inaction in 1979 against the rise of the Sandinistas in Nicaragua spread the reach of communist sponsorship of revolutionary movements into El Salvador and Guatemala. Under the administration of President Ronald Reagan, the United States intervened in Nicaragua against a Cuban-backed regime, invaded Grenada in 1983, and effected coercive regime change in Panama in 1989.

While the Canberra government has publicly committed to non-intervention, this is a mistake that concedes the initiative to Beijing. If the threat of a deterrent intervention is foreclosed against the Solomon Islands, neighboring island nations will see the benefits of playing China against the coalition of liberal democracies, creating a ring of hostile bases as the Japanese did during World War II. There are plenty of other socio-economic dislocations in Micronesia and Melanesia for China to exploit.