Is Donald Trump About to Dump Mike Pence? 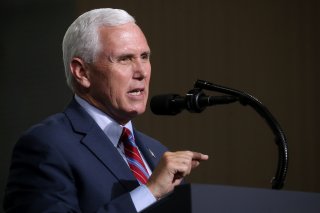 One person was missing from President Trump’s entourage as he strode to St. John’s Church yesterday. That person was vice-president Mike Pence. His absence was striking not only because he’s formally No. 2 in the White House hierarchy, but also because he represents Trump’s outreach to religious voters. Is Trump seriously thinking about dumping Pence?

There’s historical precedent. Franklin Roosevelt heaved Henry Wallace overboard in 1944, making more history than he could ever have expected by selecting Harry Truman as his replacement. Wallace would have counseled appeasement towards Stalin’s Soviet Union. Truman waged the cold war. Then there’s Richard M. Nixon and Dwight Eisenhower. Eisenhower treated Nixon badly from the outset. He viewed the younger man with barely concealed contempt. He reckoned that he could relieve himself of Nixon in 1952, but Nixon outmaneuvered him by giving the emotional Checkers speech. In 1956 Eisenhower came close to removing him from the ticket but didn’t pull the trigger. Gerald Ford dumped Nelson Rockefeller for Robert Dole and George W. Bush almost took up vice-president Dick Cheney’s offer to resign during the 2004 election.

So where does that leave Trump? Curt Mills notes that serving as a senior Trump staffer is akin to being a member of the officer corps in Stalin’s Red Army during the late 1930s. Trump seems to view purges as a politically salubrious purgative. The axe has thus fallen widely and broadly in the Trump administration. The Brookings Institution, which is keeping a running tally of the body count, indicates that as of June 1 the turnover of Trump’s “A Team” amounts to a whopping 86 percent. And that doesn’t even include Cabinet secretaries.

Possible replacements for Pence might include former acting intelligence chief Ric Grenell, who resigned Monday as ambassador to Germany. Grenell reported that Trump congratulated him on being the first openly gay Cabinet Secretary in American history. Another candidate to replace Pence is, of course, Nikki Haley, who is ensconced at the American Enterprise Institute. Other candidates could include Tom Cotton, who has called for a massive military presence to subdue protesters.

The temptation for Trump to name Grenell would seem obvious—he could flash his unconventional streak in an attempt to appeal to voters beyond his base. But the danger, of course, is that naming Grenell would prompt evangelical voters to stay at home in 2020 rather than vote. But given how stakes the high are—and that Trump has delivered on judges—they might come out in force for Trump.

Mills notes that installing Grenell would be unwelcome for those espousing a less militant American foreign policy. But the difference between him and Pence on these matters is probably nugatory. Both are inveterate hawks.

Trump has made no secret of his bemusement about Pence’s overt religiosity. The two men have almost nothing in common, apart from a hunger for political power. One is a trash-talking real estate developer from Queens; the other, a stiff from the hinterlands. Trump would ice Pence without hesitation if he concluded that it would serve his political interests. For maximum effect, Trump would most likely announce the change on the first day of the Republican Convention in North Carolina, confirming once more his bona fides as a ruthless leader who demands total loyalty from his followers.

The cold, hard fact is that Trump has never stopped being the chaos president. The notion that he won’t seek to upend his campaign now that his poll numbers are badly sagging seems improbable. But Pence, too, may be calculating his personal odds. Over the past four years, he has served Trump with canine fealty. But if he reckons that Trump is doomed to lose badly in 2020, he might prefer not to be on the ticket. He could portray himself as a martyr who had been casually given the heave-ho by Trump and remains the only true representative of the conservative faith.

Is Donald Trump Good for the Cause of Foreign-Policy Restraint?