Donald Trump Has Set a Debate Trap for Joe Biden 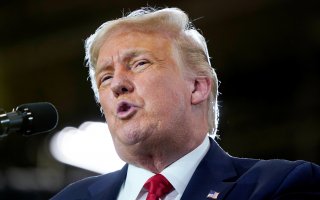 Joe Biden’s running debate with President Donald Trump about the number and format of the forthcoming presidential debates is ignoring that Biden has a lot to lose in the debates, and little to gain. This is true for all candidates who have a major lead in the polls, and especially for ones who are as gaffe-prone as Biden. In previous elections, major gaffes have cost candidates. Richard Nixon’s election prospects against John F. Kennedy were greatly diminished following the debate, in which he did not well handle Kennedy’s statements about a missile gap, and when he was seen sweating a lot. Michael Dukakis lost a lot of points when he failed to answer what he would do if his wife was raped, considered a test of his law and order position.

Moreover, Biden is an uneven debater; he ranges from stumbling to inspiring movements. He had great trouble in dealing with a challenge by Kamala Harris about his opposition to school busing during the Democratic primary debates. Biden’s weak rebuttal overshadowed most of the other points made during the debate and dealt him a serious setback in the polls. As Barack Obama’s running mate, Biden did rather poorly in his first debate against John McCain’s clueless vice-presidential pick, Sarah Palin. He recovered in both debates in future rounds but never shinned. He often rambles, does not finish his points, and all too often says the opposite of what he means.

Biden can be warm and empathic, but he is known to lose his cool. During one town hall meeting, he questioned the intelligence of someone who asked him a nasty question and challenged that person to a push-up contest, called a young woman a “lying, dog-faced pony soldier,” and told a Detroit autoworker who questioned him on his gun policy that he was “full of s—.” Biden even told a Black man that if he did not vote for him, then he was not Black, which caused a furor and forced Biden to apologize (following a considerable list of other apologies on other matters). By contrast, Trump did very well in the Republican primary debates, which started with ten candidates. He eviscerated them one after the other, whatever their debate style and long preparations were.

Above all, Biden faces a peculiar challenge, debating a consummate liar. Trump will likely claim that whatever facts do not fit his alternative reality are a hoax or makeup narratives that have no foundation whatsoever. This poses the following challenge to Biden: He either will have to spend much of the time allotted to him to establish what the reality is, leaving him little time to discuss his ideas about what needs to be done about the situation under discussion, or let the lies stand, which will make his suggestions seem unreasonable.

To illustrate, assume the moderator asks both candidates to outline how they will deal with the coronavirus pandemic following the elections. If Trump states that pandemic is on its last leg, that Dr. Anthony Fauci just told him that there will be vaccines for all Americans within two months and that this will allow all Americans to return to normal life shortly, then Biden will then either have to argue that the pandemic is still roaring. He will have to explain that it will take a long time to vaccinate three hundred million people, etc., which will eat up his response time. So, he could rebuke Trump’s assertions or proceed to lay out his plans for much more testing and contact tracing and economic relief, which make little sense if Trump’s facts are allowed to stand.

This is very far from a normal political year and Trump is very far from a run-of-the-mill candidate. Hence, Biden should demand a change in the debate format. So far, Trump’s personal lawyer, Rudolph Giuliani, sought to have more control over the moderator selection and his team pushed for the addition of a fourth debate. Biden should ask that the moderators sound a buzzer every time one of the debaters lies. The buzzer need not be activated if one of the candidates merely embellishes his record, exaggerates, or makes minor errors. However, if a candidate’s statements are incorrect on the face of it, the buzzer will sound.

Perhaps the moderators could even follow Chris Wallace. During a discussion of mortality rates on FOX News, Trump asserted, “I think we have one of the lowest mortality rates in the world.”  Chris Wallace responded with, “That’s not true, sir.” Later in the interview, after Trump maintained that his administration is not trying to discredit Fauci, Wallace noted, “this weekend, your White House put out a series of statements, so-called mistakes that Dr. Fauci had made.” At another point, Trump stated, “And Biden wants to defund the police.” Wallace replied with, “No, he, sir, he does not.”

Thomas Friedman, an op-ed columnist for the New York Times, suggested that a “fact-checking team approved by both candidates be hired by the nonpartisan Commission on Presidential Debates—and that ten minutes before the scheduled conclusion of the debate this team report on any misleading statements, phony numbers or outright lies either candidate had uttered.” It is much more effective if fact-checking takes place immediately when major falsehoods are uttered.

It’s possible that the Trump campaign will not accept this condition. However, arguments about its merit and Trump’s response will help drive home to those who do not follow the news closely that Trump is a liar. Moreover, if Trump refuses to embrace this condition, then Biden would do well to refuse to debate Trump. After all, when Trump was leading the polls in December 2019, riding high after a sustained economic growth, he was considering skipping the debates in 2020.

Many presidential debates typically take place early, late, and in the middle of the year. This study of dialogues shows that they can help steer the nation toward a particular direction. They provide occasions in which very large segments of the public pays attention and listens to the representatives of the other party, which, under normal circumstances, they can largely avoid by watching solely Fox News or MSNBC. These debates can make the nation focus on issues that did not previously gain headlines. However, these are not normal times. Biden is dealing with Trump’s call for untraditional steps. He should refuse to debate him unless fact-checkers are involved. This is essential if there are going to be reasonable debates. Those who yearn for unreasonable debates can always skim their Twitter news feed.