El Salvador and the Challenge of Promoting Democracy 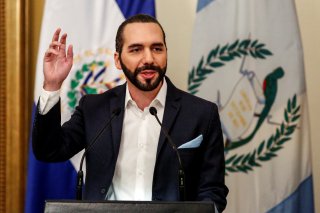 El Salvador’s president, Nayib Bukele, has recently posed challenges to the liberal international order championed by the United States. Extremely popular at home, mostly from his relative success in combating crime, and facing widely unpopular opposition politicians, Bukele has garnered unprecedented support from most Salvadorians. However, his perceived policy successes have been achieved at the expense of democratic rule. Last year, his party’s supermajority in the legislature sacked the judiciary’s magistrates and appointed loyalists who subsequently ruled that the president could run for immediate re-election—against clear constitutional bans—for the 2024 to 2029 cycle, which Bukele will likely win.

Predictably, the United States responded by deploring the undermining of democratic governance and the rule of law in El Salvador, marking diplomatic distance with the Bukele administration, and sanctioning close aids with visa revocations and potential asset freezes based on corruption allegations. But just as predictable and expected, these pro-democracy countermeasures have not sent Bukele on the path toward democracy. On the contrary, American democracy promotion in El Salvador has counterproductively made El Salvador hostile to the United States and detached from the liberal international, leading it to align with China.

America has “pressured” El Salvador with the half-baked, halfway policies of condemning Bukele, cutting diplomatic channels, and using sticks—sanctioning Bukele’s aids, for example—without any carrots. Democratic norms and principles have undoubtedly informed these policies, yet, predictably, they have not only failed but backfired. In a rational response to Washington’s policies, El Salvador has become another contentious rival of the United States in its backyard. Bukele’s public clashes with U.S. officials are evidence of this. For instance, Bukele has softly intervened in American elections by encouraging voters in California’s 35th District not to vote for Rep. Norma Torres (D-CA)—a Democrat that has called Bukele a “narcissistic dictator”—whom the Salvadorian leader blamed for “keeping our [Latin American] countries in underdevelopment.”

Moreover, Bukele has severed relations with American-led institutions. After undermining the judiciary, the Secretary General of the Organization of American States (OAS), Luis Almagro, condemned Bukele’s undemocratic actions. In response, Bukele ended an anti-corruption agreement with the Inter-American institution and claimed that “Washington’s Ministry of Colonies, better known as the OAS, has no reason to exist.” Clashes with the International Monetary Fund (IMF) have also been common, given the IMF and America’s concerns about the adoption of Bitcoin as a legal currency in El Salvador. These worries have been boldly ignored and mocked by Bukele. Most recently, to signal its stark differences with the West, El Salvador abstained from United Nations (UN) resolutions that condemned Russia’s violation of Ukrainian sovereignty and suspended Russia from the UN Human Rights Council. El Salvador was also notably absent from the vote censuring Russia’s illegal referendums to annex Ukrainian territory.

In short, U.S. policy towards El Salvador has done anything but bring Bukele into compliance with democratic norms and principles. In fact, this misguided policy has not only pushed El Salvador away from America’s sphere of influence but into the arms of the Chinese. On November 7, El Salvador’s vice president, Felix Ulloa, announced that China had offered “to buy all” of El Salvador’s debt. While Chinese officials said they were unaware of the dealings, and Ulloa said his declaration was “taken out of context,” it does not blur the fact that El Salvador is on an “unsuitable debt path,” according to the IMF, which China can and will strategically capitalize.

Further evidence of closer relations between El Salvador and the Asian power came days later. As El Salvador received important fertilizer donations from China, Bukele recently announced the initiation of trade negotiations with Beijing. This is not unique to El Salvador, as democratic countries like Ecuador and Uruguay have similarly sought a trade deal with China. But Bukele’s pivot to China is motivated by his aversion to the liberal international order led by the United States, as well as the significant, albeit risky, short-term benefits from Chinese investment and trade.

In sum, U.S. pro-democracy policies have been, if anything, disturbingly misguided, ineffective, and counterproductive in El Salvador. This is another major blow to the general failure of democracy promotion in an increasingly multipolar world where strategic interests take the front seat. Indeed, contrary to claims that Bukele will back down from his anti-American foreign policy, he has rationally and unflinchingly taken El Salvador down a path that is incompatible with the liberal, U.S.-led international order.

It is becoming hard not to characterize Washington’s idealistic “pro-democracy” policies as foolish. Democracy promotion for the sake of it is hardly a policy that will work to democratize El Salvador and make it comply with international democratic norms. It has done quite the opposite, an unsurprising development given that Latin American and Caribbean democracies have remained silent and uninterested in Bukele’s autocratic reversion, China is strategically using its geoeconomic arsenal to lure Bukele and other leaders away from the American sphere of influence, and the United States has largely ignored and neglected its neighbors in the Western Hemisphere, especially in economic and development issues.

Going forward, policies seeking to advance democracy in other states will require Washington to devise serious, strategic democratization policies that identify democracy, in El Salvador and elsewhere, as an achievable end goal. Otherwise, the United States should maintain status-quo policies. Resorting to half-baked measures lacking strategic planning and failing to factor in other states’ interests is likely to have the same results: strained relations with the authoritarian country, no credible democratization on the horizon, and a clear path for competitors to increase their influence.

The United States must seriously grasp the reality of world politics, reflect on its poor democratization record, and revise its pro-democracy policies for alternatives primarily informed by interests, with norms taking the backseat. To be fair, it is challenging to push a popular, personalist autocracy, like Bukele’s El Salvador, on the path to democracy. But this cannot account for the fact that American democratization strategies inexplicably lack a strategic compass in a multipolar international system.

Bukele-style, personalist autocracies are not unusual, and neither are failed efforts by the United States to democratize them. Smarter, more effective policies are required. For that, American foreign policy circles would do well to put into practice what philosopher John Dewey posed in 1933: “We do not learn from experience. We learn from reflection on experience.”

Leonardo Di Bonaventura Altuve is a Graduate student of Global Governance & Diplomacy at the Oxford Department of International Development, University of Oxford