The EU Remains the Best Advocate for Global Democracy 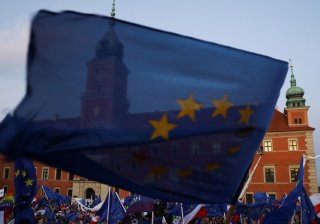 Russian president Vladimir Putin enjoys running circles around the European Union (EU). China may cherry-pick partners among EU members. Turkey can destabilize the region by releasing migrants. Even Belarus challenges the EU in a way unthinkable only a few years ago. Events may yet take a turn for the worse in the Caucasus, Bosnia-Herzegovina, and Ukraine with rumors of military action launched by Russia.

Europe’s lack of hard power may be laid bare in the months to come. Europe is not projecting military power, not invading other countries, not threatening neighbors, not waging cyber warfare, and not operating a global intelligence network. It is also not using its considerable economic power to pursue political goals.

Europe is gradually becoming the last genuine defender of democracy and human rights. A few countries outside of Europe may also claim this title, but they are far between. Europe is not flawless, but compared to illiberal democracies, autocratic or authoritarian regimes, it remains a beacon.

The EU is often depicted as an undemocratic bureaucracy run by technocrats in Brussels. This is incorrect. No decision is taken by the EU without approval in the European Council. Each member state is represented by a minister sent by their national government and held accountable by their national parliament. Most decisions require the consent of both the Council and the European Parliament, which is composed of 705 members elected directly by the European people. This relationship between the Council and the Parliament is somewhat akin to that of the Senate and the House of Representatives in the United States, but less confrontational. The European Commission, the executive institution of the EU, consists of one member nominated by each member state. The Commission can only take office after a vote of approval in the directly elected European Parliament. The Parliament also has the ability to dismiss and dissolve the European Commission.

Several countries in Central and Eastern Europe are not role models of democracy. But this critique is overblown. Observers outside Central and Eastern Europe often forget—willfully or not—that with the exception of Czechoslovakia, none of these eleven countries have historically been democratic. These countries were ruled by the Romanov or Habsburg dynasties until World War I. In the interwar period, they were authoritarian countries with little or no political freedom. The Soviet Empire engulfed them after World War II. These countries had to build democracy from scratch after the end of the Cold War. It is unfair to expect them to be as fully democratic as those member states that have been democracies for more than a century. Even Europe’s longest-standing democracies went through gradual, often painful transitions from monarchy to democracy.

The EU also compares favorably to the United States and Great Britain as a democracy. Donald Trump collected almost half of the votes cast in the 2020 presidential election. His performance in office could hardly be considered a paragon of democracy. Voter turnout at the 2018 U.S. midterm election was 49.4 percent; the 2019 election to the European Parliament saw 50.66 percent participation. Whatever is said about Brexit, Britain withdrew from a rule-based system to “take back control” and close the door for migrants and foreign workers. This is not a recipe for basic principles to underpin human rights.

Some will ask whether countries focused on democracy and human rights deliver societies worth living in. The EU also fares favorably in these comparisons.

The outcome of the Cold War convinced many countries that it might be worthwhile to adopt democracy. This trend slowly ended, and now shows signs of reversing. Democracy and social equality now compete with illiberal systems gaining momentum.

In this hostile environment, the EU’s determination to defend democracy and human rights is seen as meritorious, at least by some. The decisions to rein in Poland and Hungary, believed to be in violation of Article 1A of the Lisbon Treaty, run counter the suspicion of double standards.

The hope is that the EU, despite illiberal forces gaining ground within the continent, stays the course. The priority is to ensure that the model works at home delivering solutions and offering a worthwhile life for citizens. Harping on democracy and human rights without order at home is unwise. Policies urging others to adopt democracy and human rights without understanding their cultural background and dissimilarities with Western cultures are also misguided. Let the merits of democracy speak for themselves to let others draw the conclusion that they can use some of the ideas and principles put forth by the EU.