France Enabled Genocide. It Continues to Blame the Victims. 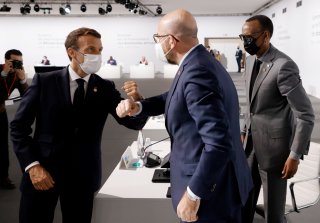 KIGALI, RWANDA—In the first years of the twentieth century, an anonymous author or authors in Tsarist Russia published Protocols of the Elders of Zion, a fabricated account purporting to document secret discussions between world Jewish leaders as they plotted to take over governments, monopolize markets, control media, and dominate the world. No other anti-Semitic hoax, and few other conspiracies, have had such lasting international impact. I have come across copies of Protocols of the Elders of Zion during trips to Turkey, Lebanon, Iran, Yemen, and Pakistan. It continues to poison Arab discourse. The conspiracy has even touched American politics. Wherever it takes root, it undercuts peace and security, if not among governments then between peoples.

Protocols of the Elders of Zion is not the only conspiracy theory that has taken on a life of its own in international politics. In just one hundred days, Hutu extremists murdered perhaps eight hundred thousand Tutsis and moderate Hutus who sought to protect them. It was deliberate genocide against the Tutsis, but it was neither spontaneous nor wholly indigenous. The late President François Mitterrand sought to privilege the Hutus whom he saw as reliable Francophone and undermine the Tutsis whom he believed were more sympathetic to the English-speaking world.

After the genocide, the French government sought to obfuscate its role, and France’s Constitutional Court ruled records surrounding the period should remain secret. President Emmanuel Macron, however, has begun to make amends for French complicity in the genocide. In 2019, he appointed a fifteen-member commission chaired by historian Vincent Duclert to study French records. While the Duclert Commission found France was “blind” and identified moral and institutional failings, it concluded that France was not itself complicit. That represented progress, but the limited scope of the French report and the continued withholding of key documents skewed its findings. Duclert, for example, elided issues surrounding French foreknowledge of Hutu dry-run massacres of Tutsis, the French role in founding and funding the television and radio stations used to dehumanize the Tutsis, French training of the extremist Interahamwe militia which led the genocide, as well as the French military presence at checkpoints run by groups implicated in genocide. Indeed, Rwandan president Paul Kagame is currently in France to meet with Macron and French generals involved at the time. Macron will later this month reciprocate with a visit to Kigali.

Last month, Robert Muse, a respected Washington lawyer, released his own extensive review of the evidence that, at a minimum, shows the Duclert Commission cannot be the final word on the matter. Muse uncovers not only likely French complicity in the genocide but also efforts post-genocide to protect the perpetrators and slander those who countered it.

The action which unleashed genocide was the downing of a private jet gifted by France to Rwandan president Juvénal Habyarimana as it approached Kigali after a summit in Arusha, Tanzania, on April 6, 1994. Habyarimana and his Burundian counterpart Cyprien Ntaryamira died in the crash. Muse noted. “Without evidence, President Mitterrand and his key Élysée advisors immediately blamed the attack on the RPF [Rwandan Patriotic Front]. French officials would continue to promote this claim for decades, even though cables that have been leaked to the public suggest that France’s own intelligence service, the DGSE, ascribed responsibility to prominent Akazu member Col. Laurent Serubuga, who had worked with French advisors from 1990 on, and to Col. Théoneste Bagosora, widely reputed to be the architect of the Genocide Against the Tutsi.” In effect, the big lie perpetrated by Mitterrand for partisan reasons has now sustained generations of genocide deniers or revisionists who argued either the Tutsis provoked genocide and/or there was a double genocide in which Tutsis—and the Rwandan Patriotic Front targeted Hutus. In effect, what the French spun in Rwanda was analogous to an argument that the Jews provoked Hitler.

After the genocide, Mitterrand sought to obfuscate the French role. He depicted France as a “foiled peacemaker,” demonized the RPF, and suggested that the Tutsi victims of genocide were also the perpetrators. The génocidaires and French officials both embraced the moral equivalence in order to cleanse themselves of responsibility.

In effect, what Mitterrand and his top lieutenants created was analogous to the new Protocols of the Elders of Zion. Not only did their narrative seek to demonize the Tutsis as malevolent masterminds rather than victims, but his spin also empowered a subsequent generation of genocide revisionists, including Paul Rusesabagina of “Hotel Rwanda” fame who currently is on trial for funneling money to designated terror groups and génocidaires. While it is fair to criticize Kagame, like any leader, on a number of fronts, the Mitterrand narrative fueled a manic and often irrational antipathy to the Rwandan president among human rights groups and journalists who too often ascribe equal credence to the perpetrators and victims of genocide.

When Macron visits Kigali later this month, he will likely visit the Kigali Genocide Memorial and apologize for French shortcomings twenty-seven years ago. He should not stop there. Instead, highlight his predecessor’s role in crafting a narrative that is not only untrue and unjust but continues to empower Rwanda’s detractors to continue to re-victimize the country and its people. Simply put, it is time to recognize that the French storyline castigating Tutsi political leaders has no more basis in truth than Tsarist Russia’s attempt to demonize and disempower Jews.