Is Georgia the Next Target of Russia’s Black Sea Strategy? 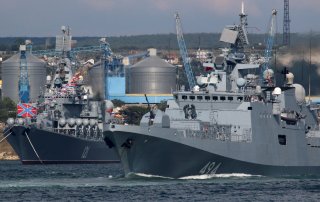 As is evident from the Kremlin’s truculent behavior in Ukraine, Russia’s massive military power has direct implications for security in the Black Sea basin. But Moscow isn’t stopping there; it is determined to reverse the Western presence in Georgia, which is why Washington needs to enhance its ties with Tbilisi—a critical node in Western architecture for Trans-Caucasus security.

The U.S. Sixth Fleet’s flagship USS Mount Whitney entered the Black Sea on November 4 where it teamed up with the guided-missile destroyer USS Porter alongside U.S. Air Force F-15E fighter jets and the U.S. Navy’s P-8A anti-submarine spy planes as part of routine maritime operations with NATO allies and partners.

Earlier on November 2, the Russian Armed Forces’ Southern Military District announced that the Bal and Bastion coastal supersonic anti-ship systems conducted simulated launches from camouflaged positions in Crimea as part of “an exercise to destroy a mock enemy surface ship in the Black Sea.” A day earlier, Russian president Vladimir Putin emphasized the “need to further improve aerospace defense,” while warning about “the increasing numbers of NATO flights [and ships] close to Russia.”

U.S. strategy for the Black Sea basin must be based on Russian imperatives and constraints. For Moscow, this region is vital; an important waterway that provides it with access to international maritime routes for grain and oil exports. At the same time, it is also the littoral basin from where it has been projecting power in Europe and the Middle East since the eighteenth century.

Over the past two decades, the Russians have been aggressively weakening Western security arrangements as we saw in their invasions of Georgia in 2008 and Ukraine in 2014. Recently, CIA director William Burns spoke with Putin regarding U.S. concerns about Russia’s military buildup on the border with Ukraine. Moscow knows that Washington is tracking its movements in Ukraine and, therefore, it will likely act in areas where the United States is not as focused.

The United States thus needs to take broader Black Sea regional security far more seriously. Since Ukraine’s February 2014 uprising that brought to power a pro-Western regime in Kyiv, the Russians have been controlling large parts of the country’s east and Crimea. Yet, Russia will not want to escalate in the Black Sea littoral because it does not want to upset Turkey, whose recent unilateral actions contradict U.S. interests to Moscow’s benefit.

That leaves Georgia as the only country in the region where the Kremlin can escalate. Of the basin’s five littoral states allied with the United States, Georgia is the only one east of the Black Sea and highly exposed to the Kremlin on its entire northern flank. Since its 1991 independence, Russia has been preventing Georgia from becoming a stable Western ally, including by continuing to occupy the breakaway exclaves of Abkhazia and South Ossetia.

Thus, the United States must concentrate on the Black Sea basin despite its strategic shift toward China. We must not forget that while the United States was struggling in Iraq and Afghanistan, the Kremlin seized the opportunity to attack Georgia. Moscow thus is likely to take advantage of our shift in focus to the Indo-Pacific.

Georgia is highly susceptible to Russian pressure, and not just militarily but also via other more covert forms of malign influence. U.S. government sources say that Russia’s foreign intelligence service, the SVR, is trying to exploit the political infighting that has occurred in the country. Despite the Kremlin’s efforts, Georgia on October 30 successfully concluded the second round of its nationwide municipal polls (its seventh consecutive free and fair election) which international observers from over 300 organizations described as well-administered and competitive. Since 2019, the governing Georgian Dream party has led parliament to implement constitutional and electoral reforms in keeping with the key recommendations of the Organization for Security and Cooperation in Europe’s Office of Democratic Institutions and Human Rights and the Venice Commission.

As a result, both rounds of Georgia’s local elections were contested by the most diverse multi-party slate ever assembled in Georgian elections. Despite increasing political polarization and the challenges posed by the pandemic, voters came out in large numbers. The results reflected the country’s diverse political leanings. The ruling Georgian Dream (GD) party won nineteen out of twenty contested municipalities. 46.65 percent of the vote, followed by the main opposition party, the United National Movement (UNM), in second place with 30.5 percent and Gakharia-For Georgia with 7.8 percent.

With the election results certified, the country’s leaders are calling on all parties to respect the public’s choice and the electoral process and thus reduce the partisanship that has been plaguing Georgian society. Indeed, this election can help the Georgian body politic to steer the country towards a Euro-Atlantic future and the 2024 application for full EU membership.

At a time when Russia is engaged in a sophisticated information operations campaign to try and undermine established democracies, the United States must support Georgia. This is precisely what was called for in an October 27 U.S. Senate Foreign Relations Committee hearing on Black Sea Security. Senator Jeanne Shaheen (D-NH) emphasized the importance of Georgia (along with Ukraine) gaining NATO membership and the need for the alliance to assist with the required reforms.

Elsewhere, three weeks ago, Defense Secretary Lloyd Austin signed a new agreement extending U.S. training to Georgian forces during a trip to the country. Separately, Georgia played a critical role in the recent evacuation efforts from Afghanistan by helping the U.S.-led effort to repatriate vulnerable foreign civilians and providing safe transit to fleeing Afghan nationals. Georgia will also deservedly participate in  the summit of democracies on December 8-9 organized by the Biden administration. Russia sees U.S. democracy promotion as both a threat and an opportunity, and nowhere is this more important than Georgia.

Since the 2008 war, Russia has been trying to enhance its own credibility as a great power. As George Friedman has long argued, Moscow has been shaping perceptions in its “near abroad” that American security guarantees have very little value. The disastrous withdrawal from Afghanistan only feeds such narratives and apprehensions. The United States cannot allow Russia to exploit the Afghan tragedy to undermine U.S. credibility in strategically contested regions, including the South Caucasus. That requires standing with our allies in Tbilisi—and around the Black Sea.

Dr. Kamran Bokhari is the Director of Analytical Development at the New Lines Institute for Strategy and Policy. Dr. Bokhari is also a national security and foreign policy specialist at the University of Ottawa’s Professional Development Institute. Bokhari has served as the coordinator for Central Asia Studies at the State Department’s Foreign Service Institute (FSI). Follow him on Twitter at @KamranBokhari.