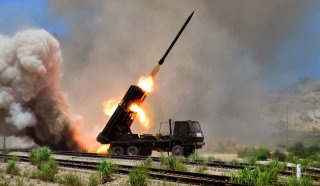 North Korea’s missile program is on a roll. During the past month, Pyongyang’s provocations have included the brandishing of new hard-to-detect cruise missiles, rail-mobile launching platforms, a self-contained liquid fuel package, and a prototype of a hypersonic glide vehicle. These innovations, which will enhance the readiness and maneuverability of North Korea’s fleet, build on Pyongyang’s already extensive portfolio of missiles.

Of varying ranges and capabilities, these missiles threaten U.S. military forces throughout Asia. North Korea also has developed long-range missiles that can reach the continental United States. Many of these can carry nuclear, biological, or other unconventional munitions. Additionally, North Korea recently restarted its plutonium-producing Yongbyon reactor.

The United States counters this North Korean threat through diplomacy, sanctions, alliances, and military force. The latter includes offensive weapons, such as nuclear strike forces, and defensive systems, such as the means to intercept missiles through kinetic interceptors.

One advantage of having such ballistic missile defenses (BMD) is that they can obviate the need to employ nuclear weapons or other escalatory means. Though the original Ground-Based Midcourse Defense program, which protects the U.S. homeland, has a checkered test record since being rushed into operation in 2004, the United States will deploy a Next-Generation Interceptor to outpace the North Korean threat. To avoid a repeat of past problems, Congress recently urged the Pentagon to continue to leverage competition from the two contracting teams to deliver the most capable product in the most cost-effective and timely manner.

The Russian government has consistently opposed U.S. missile defense programs, whatever their capabilities and location. No effective U.S. BMD architecture would be acceptable to the Kremlin due to exaggerated Russian threat perceptions and Moscow’s desire to keep the West weak and divided.

Over the years, Russian officials have strived to delay and derail U.S. missile defense programs through multiple means, including denunciatory rhetoric, intimidating U.S. partners, and other initiatives. U.S. officials spent decades trying to address Russian concerns by offering Moscow various transparency and confidence-building measures. Washington was never able to overcome Russian objections since Moscow has, like Pyongyang, always dismissed and downplayed U.S. offers of compromise. Conversely, Republican and Democratic administrations alike have refused to renounce the means of protecting Americans and their allies, such as Israelis and South Koreans, from hostile missiles.

Notwithstanding these protracted BMD disputes, Moscow has repeatedly negotiated major arms control agreements with Washington. For example, the landmark 1972 Strategic Arms Limitations Talks agreement combined legally binding restrictions on both offensive and defensive forces. Though lamenting the growing U.S. interest in BMD capabilities after the Cold War, which was aimed at addressing threats from North Korea and other rogue states, the Russian government signed the 2002 Strategic Offensive Reductions Treaty. This so-called Moscow Treaty, which substantially reduced both sides’ nuclear weapons arsenals, lacked any binding limits on strategic defenses. While still trying to constrain U.S. missile defenses in the following years, Moscow accepted the ten-year New START Treaty in 2011, which both countries extended earlier this year.

History thus invalidates the argument that U.S. missile defenses present an insurmountable impediment to arms control negotiations between the United States and Russia. For more than fifty years, Moscow has repeatedly yielded on BMD to achieve other priorities, such as constraining U.S. offensive nuclear forces.

Another reason Russian officials have compromised on missile defenses is that the small number of U.S. national BMD interceptors could scarcely neutralize Russia’s enormous fleet of ballistic, cruise, and, most recently, hypersonic missiles. Soviet and now Russian officials have poured massive resources into strengthening and diversifying their strategic offensive forces. This has recently included developing frightening delivery systems such as nuclear-powered cruise missiles and long-range nuclear-armed torpedoes. Even without these terror weapons, Russia can readily overwhelm any U.S. defenses.

Even so, the Kremlin’s pride is hurt when the United States perceives North Korea, Iran, or China as a greater threat than Russia. Moscow’s attacks against U.S. BMD systems are also self-serving given that Russia has heavily invested in its own missile defenses. Indeed, Russian president Vladimir Putin has boasted that Russia is building the world’s most effective defenses against hypersonic delivery systems.

The Soviet and Russian anti-BMD campaigns have further aimed to rally Russians behind the Putin regime, boost Russian military spending, and weaken U.S. alliances by threatening countries that cooperate with U.S. programs. Making deals with Moscow at the expense of capabilities that can protect U.S. partners from missile strikes would further damage these alliances.

Instead of pursuing elusive treaty limits with Moscow on missile defense, the United States and Russia can address BMD questions in their newly relaunched strategic stability talks. For example, the parties can exchange assessments about regional missile threats and potential risk reduction measures. U.S. military leaders are eager to expand dialogue to avoid confrontations.

Moscow and Washington should also intensify constraints on the main driver of U.S. BMD programs—North Korea’s increasingly sophisticated threats. They must urgently press Pyongyang to curtail its destabilizing missile programs. The United States should also invest in robust air and missile defenses for Guam, Hawaii, and Palau; superior global sensor systems; and the Next Generation Interceptor to deter North Korea from ever considering an attack.

Richard Weitz is Senior Fellow and Director of the Center for Political-Military Analysis at Hudson Institute.