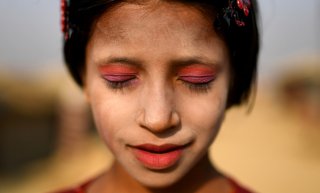 Rajuma, a young Rohingya woman, clutched her baby boy as she fled the Burmese military’s brutal treatment of her Muslim community. It was then that her already fragile world was shattered.

A soldier clubbed her on the head, while others tore her baby from her arms and threw him into the fire. The violence did not stop with her child’s death. The soldiers then proceeded to gang-rape Rajuma. Before the day was through, she had seen her mother and three siblings killed as well.

Ultimately, Rajuma escaped to what is now the world’s largest refugee camp in Cox’s Bazar in Bangladesh. The settlement houses over a million people; 52 percent of them are women and girls.

Rajuma is far from being the only Rohingya woman scarred by the Burmese military. The United Nations characterizes the government’s actions there as genocide and crimes against humanity.

But Rohingya women’s vulnerability to sexual violence and abuse does not end at the Burmese border. It continues in the refugee camps.

Make no mistake: the genocide that took place in Burma in 2017 is real. Sadly, the U.S. government still stops short of classifying the slaughter there as genocide. Issuing a determination could go a long way towards procuring justice for Rohingya.

Sexual Violence as a Military Weapon

For decades, the Burmese military has used sexual violence as a weapon of war against the Rohingya. More than half of the 101 women interviewed in a 2017 study by the UN Office of the High Commission for Human Rights said they had been raped or suffered other forms of sexual violence at the hands of soldiers.

This savage tactic was on full display when the Burmese military carried out so-called clearing operations in August 2017 which led directly to the displacement of at least 750,000 Rohingya. The UN Population Fund estimates that some 13,500 of these refugees sought services to address sexual violence after crossing into Bangladesh. How many more women and girls endured abuse without seeking treatment is unknown.

In traditional Rohingya Muslim society, rape brings shame to the victim’s household. Pregnancies resulting from rape are viewed as even more shameful to families. As a result, survivors are often victimized twice: first by the Burmese security forces and then from social norms that lead to their abandonment during their time of greatest need. Survivors, especially young girls, often hide their pregnancies and do not seek medical care for their deliveries.

In 2018, shortly after the refugee influx, almost fifty thousand babies were born of rape in the refugee camps, and there was a surge in child marriages. Babies born from rape are often shunned rather than seen as a blessing. This attitude creates concerning vulnerabilities that are exploited by traffickers who take unwanted children off their mothers’ hands.

The Coronavirus Comes to Camp

As though the atrocities of 2017 weren’t enough, Rohingya women’s suffering is now being compounded by the coronavirus pandemic. An overcrowded refugee camp is hardly conducive to social distancing. And access to medical care, already limited, is increasingly difficult. Coronavirus conditions are further exacerbating barriers to access to medical care and are further impeding women’s ability to participate in decision-making within the camps.

Worse, women in the camps are being falsely blamed for the spread of the coronavirus. A recent study found that certain activities by women and girls are perceived as tarnishing the family’s izzat, or “honor.” For example, when women attempt to access healthcare facilities or gender-based violence services, some view this as breaking the practice of purdah, which is the seclusion of women from public spaces.

As a result, women are experiencing more gender-based violence, more behavior-policing, and more restrictions on their mobility. This, in turn, has reduced their access to life-saving health care and information. A quarter of all healthcare workers report that fewer women are visiting their facilities.

And 43 percent say they have heard of pregnant women or mothers dying due to heightened barriers to access to maternal health and labor services during the coronavirus era. In Rohingya society, women are not usually the ones who make these health care decisions. In over half of Rohingya households, men decide when and where women should give birth.

Even prior to coronavirus, power in refugee camps was concentrated in the hands of men. Day-to-day camp activities are controlled by camps-in-charge, and all camps-in-charge are men. Men are also the primary decisionmakers over household-related issues, such as budgeting and food purchases, as well as issues that directly affect only women and girls.

As the United States continues to play a critical role in responding to the coronavirus outbreak in the camps, it should consider a multi-pronged approach, one that elevates the voices of Rohingya women and girls.

In June 2019, the White House published the United States Strategy on Women, Peace, and Security (WPS). The document specifically committed to “promote the protection of women and girls’ human rights, access to aid, and safety from violence, abuse, and exploitation around the world.”

The administration can put this policy into action by amplifying Rohingya women’s roles in combating the coronavirus and providing community support during a difficult time.

What Rohingya Women Bring to the Table

Despite the restrictions of camp life, many women are already doing this. A small group of volunteers has mobilized to provide accurate information about preventing the spread of the coronavirus. They are educating friends and neighbors on best practices like hand-washing and social distancing. Additionally, Rohingya women already produced over fifty thousand masks through a program coordinated by UN Women.

These women are filling critical gaps in the camps. A lack of access to reliable information about the coronavirus has been a particular challenge in Cox’s Bazar—in part, due to preventable causes.

What the United States Can Do to Help

The United States can help with this.  It should press the government of Bangladesh to lift restrictions on internet and telecommunications access to ensure that refugees, including women, have adequate access to information. Sometimes elevating the role of women requires governments to get out of the way.

In other cases, it requires governments’ active involvement to ensure that women’s voices are heard. Promoting the rights of women comports with the free and open Indo-Pacific strategy, an inherently values-based approach to U.S. policy in Asia. This strategy is what led to the sanctioning of Senior General Min Aung Hlaing, the Burmese military official largely responsible for atrocities committed against the Rohingya in August 2017, as well as the designations of the 33rd and 99th Light Infantry Divisions who carried out the general’s orders.

Sanctions were a good first step toward levying consequences for the Burmese military’s egregious actions, but the United States has still stopped short of recognizing the military’s actions for what they are: genocide and crimes against humanity.

The Secretary of State has the authority to designate what happened to the Rohingya as genocide at any point in time. Yet, nearly three years on, the U.S. government has failed to call a spade a spade.

The UN Fact-Finding Mission found evidence for both crimes against humanity and genocide. Notable entities like the U.S. Holocaust Memorial Museum concur. It’s time the United States got on board.

The United States is already the top donor to the Rohingya refugees. A U.S. decision to issue an atrocity determination could spark much-needed aid and assistance from around the globe. This could ensure adequate aid to the Rohingya, including support for programs that seek to elevate the voices of women and heal the wounds that Rohingya women endured when the Burmese military committed these atrocities.