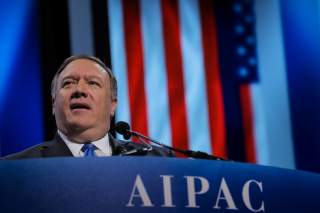 AIPAC’s influence in both political parties remains formidable, but with a Republican White House that’s hugged the Israeli government tight, combined with a fresh row in the United States over anti-Semitism, spurred by a Democratic lawmaker, AIPAC’s vibe flirted with the overtly partisan.

“Bigotry is taking on an insidious new form in the guise of ‘anti-Zionism,’” Secretary of State Mike Pompeo told the conference. “It’s infested college campuses in the form of the Boycott, Divest, and Sanction movement. It’s discussed in our media. It’s supported by certain members of Congress, I suspect none of whom are here tonight,” he added, to laughter and applause.

For most speakers, the barely-cloaked pummeling of Rep. Ilhan Omar was a fait accompli. The vice president, Mike Pence, less diplomatic here than his cabinet’s secretary of state, went brass tacks.

“Recently, a freshman Democrat in Congress trafficked in repeated anti-Semitic tropes, alleged congressional support for Israel reflected an allegiance to a foreign country, said that Israel had – and I quote – 'hypnotized the world.' And she accused Americans who support Israel of being bought off with campaign contributions,” Pence said. “Anti-Semitism has no place in the Congress of the United States of America.”

The White House is positively fideistic toward Prime Minister Benjamin Netanyahu’s government in Jerusalem—of that, there has long been little doubt. As has been reported, former White House chief strategist Stephen K. Bannon, while in the administration, even refused to meet with Palestinian Authority head Mahmoud Abbas, as he didn’t “want to breathe the same air as that terrorist.”

However, candidate Donald Trump was more circumspect on the Middle Eastern conflict which, if solved, would “the biggest deal of all time.” Candidate Trump wanted to be a “neutral guy,” causing a brief furor among the conservative smart set that fretted America First would careen the GOP into the “electoral ravine.”  It was not to be; neither was the policy. Trump’s play on Israel-Palestine has been many things—historic—but it has not been neutral. As Scott McConnell, a longtime Levant looker-on, states correctly in the American Conservative: “President Donald Trump, after some interesting early sallies that expressed a desire to serve as a disinterested broker, has gone all the way in the opposite direction.”

So he has. But Omar’s imbroglio has torn an opening for a pile-on. The Democrats—the global left—are the preeminent force of anti-Semitism, so goes the essentially subliminal argument. “In Britain, the Labour Party’s tolerance of anti-Semitism in its ranks is a national disgrace,” said Pompeo, who a former senior administration told me is “the second most powerful man in America” on Friday.

If Bernie Sanders, though Jewish, seizes control of the Democratic Party next year, expect howls from the right that he is a Corbyn analogue, the argument being that he is the company he keeps: Bernie’s massive political apparatus was among the first to back Omar for Congress.

For a White House that’s struggled to cleave itself from the alt-right, the anti-Semitism theme serves another purpose: the frenzy lends Donald Trump some sanctimony of his own. Senate Minority Leader Chuck Schumer, the top Democrat to address AIPAC, knows what’s up. He’s trying to stop the bleeding: “When someone says that being Jewish and supporting Israel means you’re not loyal to America, we must call it out. When someone looks at a neo-Nazi rally and sees some 'very fine people' among its company, we must call it out.”

But combined with a favorable Mueller report, it’s been straight-up manna from heaven recently for the president. The president has underwhelmed on his core domestic pledges—an immigration overhaul and the annihilation of Obamacare—but it might not matter. As an aide to a senior Democratic senator told me, a great fear is that Trump, as the Mueller report summary from Attorney General William Barr augurs, is less Richard Nixon than Bill Clinton. And like Clinton, after a midterm humiliation, Trump’s trudging his way to the re-election.

Trump’s encore campaign is also shaping up like his old rival’s—George W. Bush—brute force survival. Trump 2020 may be less neo-Buchananite—a campaign official informs, cross Jared Kushner and Ivanka Trump at your own peril. Instead, expect the “Three F’s”: fear of socialism, a feeling of vindication on the Russia conspiracy, and a fear of anti-Semitism.

At dinner after Monday’s AIPAC speeches, a prominent conservative journalist condemned a prominent left-wing journalist for wanting “the annihilation of the Jewish people” because of his criticisms of the Netanyahu government in Israel.

It could get ugly in a hurry.