How to Know if Putin Is Going to Nuke Ukraine 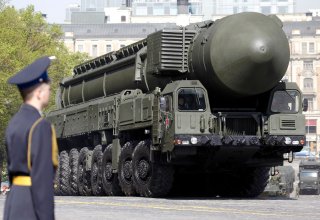 Nuclear weapons have not been used in war since 1945, but their presence has loomed large over the Russian invasion of Ukraine. On December 7, Russian president Vladimir Putin addressed Russia’s Human Rights Council, stating:

In terms of the threat of nuclear war, you are right, such threat is increasing. … As for the idea that Russia wouldn't use such weapons first under any circumstances, then it means we wouldn't be able to be the second to use them either—because the possibility to do so in case of an attack on our territory would be very limited.

While Ukraine gave up the nuclear weapons left behind after the Soviet collapse, many Russians see the current conflict as one with NATO. And Russian leaders, diplomats, and commentators have not shied away from advocating for nuclear use, frequently referencing Russia’s arsenal.

These threats have drawn international condemnation, but they have also influenced policy. Russia maintains approximately 6,000 nuclear warheads, including hundreds of short-range “tactical” weapons. Putin has used the risk of escalation both to limit Western military aid and—with the exception of a few drone strikes on Russian territory—to ensure that the war is fought in Ukraine. Russia’s nuclear threats ensured that Western assistance was initially limited to defensive systems, and escalation risks still underpin decisions to deny Ukraine access to weapons capable of striking Russia.

But is Putin actually close to ordering a nuclear strike? Probably not. Despite Russia’s abysmal conventional performance, Putin would still risk more than he could gain by using nuclear weapons. Neither Ukraine nor its Western allies seem likely to abandon the war effort following a limited strike, with Kyiv viewing the conflict as an existential struggle. A broader nuclear strike might have a significant effect on the battlefield, but it would come with equally great escalation risks. Perhaps most importantly, any nuclear use might alienate India and China, Russia’s key remaining trading partners.

Costs aside, there are three signs that we should look for before worrying about nuclear use. Putin might believe he must win in Ukraine for his regime to survive or be convinced that limited nuclear use is possible, but a nuclear attack would not be a bolt from the blue. In ascending order of predictive power, warnings of an imminent nuclear strike would come from Russian whistleblowers, the United States, and Putin himself. An attack would likely be preceded by at least two and perhaps all three of these warnings, although even one would be cause for alarm.

Wait for the Telegram

With Russian media under state control, Russians have turned in droves to Telegram. Since the start of the war, Telegram has become the most popular messaging app in Russia, allowing anyone to share uncensored text and videos. Like Twitter in the West, Telegram has become a key source of information for Russians interested in the war, with government, media, and public figures operating channels where they can broadcast news to subscribers.

Telegram is also an important source of local intelligence, bypassing Moscow’s tight control over the war narrative. When Ukrainian drones struck airbases deep inside Russia on Monday, it was immediately reported on Telegram, with the popular channel Baza posting: “An unknown drone attacked an airfield in the Saratov region.” Channels are replete with firsthand accounts of events on the battlefield, including complaints about poor leadership, equipment, and training.

Along with direct leaks, like those by purported FSB whistleblower “Wind of Change,” unfiltered social media means any Russian could sound the alarm on impending nuclear use. As the whistleblower explained in an April 12 email to dissident Vladimir Osechkin, “to begin with, this [executing a nuclear strike] would require the consent of all those involved.” The use of a tactical weapon would be a complex operation, creating myriad opportunities for an anonymous warning.

A Secret Revealed Is a Secret Destroyed

In a departure from past intelligence practices, the Biden administration has adopted a new information warfare strategy: radical transparency. Historically, the United States has been loath to share timely intelligence, prioritizing protecting sources and methods. The new strategy, however, aims to not only take away Putin’s ability to exploit the element of surprise, but also to seize the initiative in setting the public narrative.

The United States has therefore made public its knowledge of Russian military plans, plots, and false-flag operations. These press conferences and official statements are not just for the public benefit: they speak directly to Putin. Each announcement signals America’s awareness of Russia’s plans and is a reminder that Washington is prepared to counter them.

Since the start of the war, the United States has been watching Russian nuclear facilities, looking for signs like changes in strategic force alert levels. Though Russia could potentially move a nuclear weapon without being detected by U.S. satellites, human intelligence assets would be harder to fool. In early November, for example, senior American officials told the New York Times that high-level Russian military leaders had discussed the use of nuclear weapons in response to successful Ukrainian counteroffensives.

While the intelligence shared with the Times did not point to an impending strike, the fact that Washington knew the content of such high-level discussions and released it so quickly is telling. The Biden administration would likely take a similar approach to more concrete evidence of a coming Russian nuclear strike, both to shake Putin’s confidence in members of his inner circle and to warn him of the consequences of nuclear use.

Putin Would Tell Us Himself

The most telling indicator of an impending attack, however, would be a direct warning from Putin himself. Although military operations are typically kept secret as long as possible, there are two reasons why Putin would announce his intentions immediately before a strike.

First, providing a direct warning of what was coming and making it clear that the strike was not a prelude to a larger attack would be key to managing escalation. NATO includes three nuclear-armed states, and any nuclear use in Europe carries a serious risk of spillover into a global thermonuclear exchange with NATO. Putin would want to make his (limited) intentions clear and minimize the chance of catastrophic misperception.

Second, even if Putin was willing to accept the risks of nuclear use, a direct threat might achieve the same objectives. In fact, a specific threat to strike would be more credible, as backing down would carry reputational costs. Just as the United States hoped when it dropped leaflets over Japanese cities warning of destructive air raids to come, an explicit warning of impending nuclear use might be sufficient to break Ukraine’s will.

Since Putin has never been shy about making threats or boasting of Russia’s willingness to use its military might, we should be reassured that his nuclear rhetoric remains circumspect. In further remarks on December 7, Putin expanded: “We have not gone crazy. We are aware of what nuclear weapons are. … This is a deterrent factor that does not provoke the expansion of conflicts, but a deterrent, and I hope everyone understands this.”

As much as Putin may rattle his nuclear saber, it remains firmly sheathed. With no alarm bells ringing from any quarter, the risk of nuclear use is low—for now.

David M. Allison, Ph.D., is a Stanton Nuclear Security fellow with The Project on Managing the Atom and International Security Program at Harvard Kennedy School's Belfer Center for Science and International Affairs. A former U.S. Army officer, his research focuses on emerging threats to strategic stability and assessments of military capabilities in nuclear and conventional conflicts.