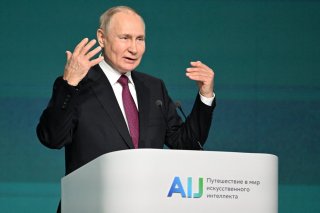 Despite Russian president Vladimir Putin’s 83 percent approval rating, his deceptions about losses in Ukraine and gradual increases in the costs of sanctions make him vulnerable to a Western campaign of information warfare. Putin must now deliver victory or face being removed. Skeptics warn that any perceived foreign interference in Russian society will trigger a defensive nationalism that neutralizes any of the effects of Western-influenced agitation. They will highlight the consistent failure of contemporary psychological warfare units in Afghanistan, Iraq, and Syria, and will point to NATO’s collective indifference toward learning about Islamic political culture as a cause that led to those failures.

In March 2022, the war in Ukraine increased support for Putin from 69 to 83 percent. These numbers are similar to when Russia attacked Georgia in 2008 and seized Crimea in 2014, though support dipped temporarily as a result of partial conscription in October. Overwhelmingly, Russians see the war in Ukraine as defensive and preemptive of a worsening situation as NATO expanded east. While some analysts believe these estimates of Russian approval are accurate, the values need to be broken down into five contexts.

The Anatomy of Putin’s Public Support

First, Russia’s political culture is one of conformed non-participation, with up to 75 percent of respondents refusing to answer surveys, undermining the validity of the published figures. Structured surveys have shown that Russians misrepresent their true beliefs in polls, primarily out of concern for their personal safety.

Second, while 90 percent of those over the age of sixty-five support Putin, of those under thirty-five years of age, only a third feel national pride. Twenty-seven percent of the Russian population believes that the country is proceeding in the wrong direction. Putin’s poll numbers are actually soft because he is politically vulnerable across five dimensions. First, his regime has lied about Russian battlefield deaths in Ukraine. Second, he has staked his reputation on winning a war that he is currently losing. About half of those who support Putin do so out of negative feelings, meaning insecurity. They will turn against him if he cannot produce victory in Ukraine.

Third, the Russian economy is officially in a recession and the long-term economic and demographic prospects of Russia are grim. Fourth, as a symbol of Russian nationalism, Putin is enjoying a temporary rally-around-the-flag boost to his popularity. Fifth, and most importantly, he violated the Russian social contract of not imposing costs on Russian citizens when he called up conscripts, in exchange for them not becoming involved in politics. Furthermore, support for conscription has largely been maintained, despite false inducements promised by Moscow, through a native nationalism that will erode as casualties rise.

Certainly, any Western public diplomacy, to be credible, must acknowledge security concerns that are grounded in Russia’s fairly regular experience of predatory invasions from Central Europe. Implied threats to Russian geography or security and appeals to human rights issues or democracy will not resonate with more than a minority of the population. Any attempt to discredit the Russian leadership will fail from the beginning, as Putin will identify it with a conspiratorial NATO and anti-family cultural wokism. Putin will also gain succor from right-wing cultural supporters in the West, though this will be temporary, and it is the initial cost of pushing political self-reflection on the Russian people. Russians under thirty years old are almost ripe for civil disobedience if they do not already passively reject their government’s policies. Any information operation content must be careful not to unite the mainstream with either the political elite or the far right. There are three issues of an information warfare campaign that need to be addressed: the message, the means, and the blowback.

First, information can be disseminated to provide a collective action solution for groups otherwise divided due to mistrust. For example, soldiers could be prodded to revolt against incompetent commanders, signaling widespread disaffection amongst conscripts with their battalion-level officers. Parents of fallen soldiers, those at least not seeking solace in revenge, could be encouraged to demonstrate publicly. Otherwise, isolated ethnic communities, targeted for conscription, like the Buryats, Chechens, and Bashkirs, could be incited to counter-mobilize.

Second, mistrust can be sown around the leadership by identifying and suggesting the disloyalty of selective individuals and factions that pose a threat to Putin’s control, either to provoke his paranoia or to incite a preemptive reaction from factions concerned about being purged by him. The gangsterized intelligence organizations, the Rosgvardia paramilitaries, the weak but wealthy oligarchs contributing to Russia’s economic recession, the anti-democratic state bureaucrats, and bandwagoning political parties would be the key targets of this information operation.

Third, mistrust can be sown between the general population and the leadership by emphasizing what Stanford University professor James Fearon called “audience costs.” These are the costly-to-reverse promises Putin has made to the Russian people about not imposing costs on them. Conscription, battle deaths, increased work hours for wartime industries, defeats in Ukraine, and the worsening economy, erode the level of popular deference to his rule, which may matter if there is a leadership crisis.

However, this will produce a chaotic rather than a manipulable outcome and is hazardous for three reasons: First, it risks replacing Putin with an aggressive and competent military leader, termed the Thermidorian Reaction by revolution scholar Crane Brinton, describing Napoleon Bonaparte’s rise to power out of the chaos of wartime France in 1794. Second, Putin could be replaced by a risk-prone right-wing ideologue more willing to take drastic steps, such as the use of nuclear weapons. (Politico proposed twelve possible replacements, of which four are Putin’s choice, four replace him involuntarily, and four emerge out of a military coup.) Finally, Putin could be replaced by someone with greater competence in domestic politics and diplomacy. The British operation to assassinate Reinhard Heydrich in 1942, Adolf Hitler’s putative successor, was in part due to his anticipated proficiency and longevity in power.

Choosing which champions to protect and which to manipulate will involve highly contentious debates within Western intelligence and psychological warfare organizations. For example, will Alexei Navalny be spared or held in reserve, given his alleged association with right-wing movements? The political science literature on regime-type transitions from authoritarian to democratic systems has found that almost all new governments retain factional members from the previous regime, so no new leader can be expected to be entirely innocent of association with Putin.

Western intelligence services planting disruptive anti-Putin information on internet servers outside of Russia will require the cooperation of private operators but can do so easily through mechanisms like anonymous networks like TOR or I2P, mesh networks (which facilitated peer-peer communication during the 2020 Hong Kong protests), or software circumvention tools that do not rely on third-party VPN servers (proxies or rerouting programs), if Russia does not disable the enabling nodes.

Against the dissemination of anti-regime information on servers within Russia, Russia’s internet and media regulator, Roskomnadzor, can (and previously has) censor, slow down, or otherwise modify network traffic by keyword filtering, data packet inspection (DPI), DNS redirecting, or IP blocking. States can hide their censorship tactics by displaying error or other messages to users that make it seem as if they are experiencing network difficulties instead of censorship. These techniques are accessible and have been employed by countries like Cuba, Saudi Arabia, Iran, and North Korea.

Countries can physically disconnect their people from the internet by ordering ISPs to shut down access for a particular region, as often demonstrated by Iran, or modify internet protocols to complicate outside access. However, Russia’s internet operates through primarily Western-owned undersea cables, which would sever connections with its overseas developing world allies, like Syria. Russia’s internet connection to China or Iran could also be hijacked by Western agencies or already-planted programs could be propagated by anti-regime Russians, to coordinate internally using a private citizen hotline channel like those used on the Chinese network Weibo.

Individuals can theoretically bypass the censored network completely by connecting to the internet via a satellite phone or other satellite communication capabilities (like Starlink). WiFi balloons have also been deployed during emergency humanitarian missions to provide remote areas with an internet connection that cannot be blocked without the use of mobile jammers or air defense. Digital Radio Free Europe equivalents are possible although they may be jammed. The United States has broadcast-capable EC-130J aircraft that can facilitate communications over AM, FM, HF, and military communication bands, and could even break into television communications. There have been a number of Western initiatives, such as the Alliance for the Future of the Internet, but there is no overarching organization yet.