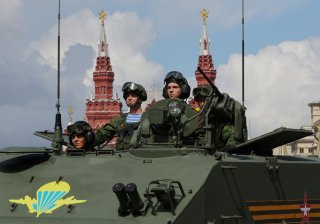 After its withdrawal from Kherson, Russia’s back is against the wall in Ukraine. Ukraine’s successful offensive has prompted concerns that Russian president Vladimir Putin might contemplate what President Joe Biden deemed nuclear “Armageddon” last month. This month even China joined the West in strongly condemning this Russian threat. Will Putin nonetheless resort to nuclear weapons to stave off defeat?

In fact, Russia is sufficiently deterred from using any nuclear weapons, including strategic and tactical warheads, a dirty bomb, or a nuclear plant meltdown. Fears that Putin might resort to nuclear weapons appeared at earlier junctures in this conflict. In September, National Security Advisor Jake Sullivan issued a stark warning to Moscow after Russia’s latest nuclear threats that was reiterated again this month when CIA director William Burns met with his Russian counterpart in Ankara, Turkey to convey the “consequences of the use of nuclear weapons.”

Potential U.S. responses to Russian nuclear use would include annihilating Russian forces on the Ukrainian battlefield via conventional Western weapons, an allied move against Russia in the Arctic, bringing Ukraine into NATO and the European Union (EU), trying Putin at the Hague for war crimes, seizing additional assets held Putin’s family and his close associates, enacting large scale reparations on Russia, and prosecuting Russian officials for war crimes.

There are other indications Putin is unwilling to use nuclear weapons. Kremlin spokesman Dmitri Peskov admitted Russia will not use nuclear weapons in Ukraine, which he restated after the incident in Poland last week. Russia already had multiple chances to cause a nuclear accident at the occupied Zaporizhzhia power plant and passed (its newfound shelling is a response to Putin being warned at a series of global summits about loose nukes). Moreover, when Putin argued that his previous nuclear threats were not a bluff, this further undermined his credibility.

So why is the West so worried about nuclear escalation? Russia has openly and repeatedly threatened to use nuclear weapons while Ukraine routes its forces on the battlefield. Kremlin insiders are deeply unhappy, the mobilization of 300,000 reserves was botched from the start, and hundreds of thousands more have fled the country. Putin is losing allies in Beijing and New Delhi and relying on Iran and North Korea for missiles, drones, and artillery. Exaggerated commentary from Biden has also raised public concerns about Russia’s nuclear threats.

Thus, it is no wonder the world is deeply concerned about Putin’s demonstrated irrationality. He went forward with an attack on Ukraine against the advice of his military commanders, not to mention stern warnings from Western leaders. Moreover, he failed to pull back after Russian losses mounted quickly and the West rallied to Ukraine’s aid.

Yet, in all likelihood, Putin is not fully irrational. He understands that the West has red lines and he has not crossed them yet. For example, Putin has allowed an enormous amount of Western aid to enter Ukraine and has not attacked any Western countries with military force.

This is why the West rapidly needs to understand what Putin is not restrained from doing, namely, waging full-spectrum warfare that includes using cyber power, energy cut-offs, and infrastructure attacks. This is what the OPEC+ oil production cut and sabotage of the Nord Stream 1 and II pipelines were all about. The West must be vigilant against attacks on other gas and oil lines, deep sea internet cables, satellites, and space installations, as well as blackouts in the United States or Europe.

The silver lining of the Nord Stream pipeline attack was that, in addition to the probable confirmation of Russia’s dirty hand, it showed that Putin is fishing for alternative means of retaliation. Remarkably, Russia was then talked back into the deal to allow Ukrainian grain to be shipped from its ports to world markets. The United States and its allies are not as capable of deterring the aforementioned forms of lesser warfare but at least Western nuclear deterrence has proven the test of time.

Dr. Jeffrey A. Stacey is a former State Department official in the Obama Administration. Author of Integrating Europe, he has completed the forthcoming “Full Spectrum Warfare:  Donald Trump, Joe Biden, and the Fight for Global Democracy and embarked on a book entitled The Hinges of History.