How to Protect Africa from the Coronavirus 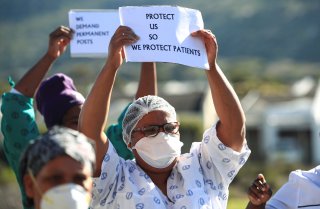 Africa is the continent of eternal youthful optimism and hopefulness, but also a place of frequent tragedy and despair. Sub-Saharan Africa has seen coups, civil wars, and genocides; HIV-AIDS and Ebola together with malaria and other ailments; drought and famine—and of all things even huge swarms of locusts—in recent years. Yet the continent, which is the site of so much suffering and sadness, has also become a great land of hope. About a third of its countries are now at one stage or another of democracy, and until the coronavirus, a similar number were boasting solid economic growth. Health-care systems still struggle, but the incidence of infant and childhood death is way down from what it was a few decades ago, and life expectancies are way up. The continent’s demographic explosion—most future growth in the worldwide human population is expected to occur in Africa this century—raises long-term questions of sustainability and the need for job creation. But it also translates into an energetic, burgeoning workforce with great potential.

In part because of these unique features, the coronavirus has hit Africa somewhat differently than in most of the rest of the world. Apart from South Africa, incidence and mortality rates appear relatively low, as best we can tell from available testing.  It would appear fair to say that, compared with the various other scourges that have hit the continent, coronavirus is to date nowhere near the worst health care problem African nations have confronted.

Africa’s experience with other epidemics has taught it how to cope with coronavirus pandemic. It established the Africa Coronavirus Task Force in February—a decision that demonstrated a swiftness and unity in dealing with the pandemic. Travel restrictions and other lockdown measures have also helped curb the spread of the virus. These measures have proven largely successful as the number of confirmed cases continent-wide is under nine hundred thousand. Nations like South Africa that have experienced a surge in cases and have taken more drastic measures like alcohol bans and implementation of curfews to decrease the spread of the virus.

There is other encouraging news from Africa as well. While conflict remains tragically endemic in many areas, and while any number of lives lost due to violence is too many, it is reasonable to say that there is no long-term trend towards worsening warfare in Africa, and there are even some genuinely positive movements in a number of places.

Any attempt to make sense of overall strategic trends on the continent of some fifty countries might begin by examining the pivotal states, or the major subregional powers. We would propose eight for sub-Saharan Africa: Nigeria in the west, DRC in the center, Kenya and Tanzania in the east, Ethiopia in the horn, Sudan in the Sahara, plus South Africa and Angola in the south.  According to the conflict database run by the Peace Research Institute Oslo and Uppsala university in Scandinavia, none of these countries has been trending towards significantly higher levels of conflict-related violence.

One can also look at those places where the United Nations or African Union missions are deployed in support of peace processes. These include Sudan, South Sudan, Somalia, the Democratic Republic of the Congo, the Central African Republic, the Western Sahara, and Mali.  Here the picture is more mixed, but still not entirely bad by any means, with deterioration in Mali and Somalia balanced by progress (however fitful and fragile) in Sudan and possibly the Democratic Republic of the Congo. There are at present no big wars in Africa of the type that have produced mass famine, widescale ethnic cleansing, or genocide in the past.

Interstate war remains an extreme rarity in Africa. Indeed, after improving relations with Eritrea in recent years, Ethiopia may be making progress towards greater regional collaboration over sharing the waters of the Nile with downriver countries Sudan and Egypt. That should further reduce any residual risk of state-on-state war in the continent’s northeast. Some civil wars create spillover effects in neighboring countries, as in northeast Nigeria and Mali today, but at least the former is not as bad as it once was, and these conflicts usually do not wind up producing direct combat between neighboring national armies.

Yes, there have been some setbacks of late. Mali remains afflicted by extremist violence. Burkina Faso, Cameroon, Mozambique, Niger, and Somalia have also seen notable upticks in combat fatalities in recent months or years. South Sudan and the Central African Republic, as well as parts of eastern DRC and northeastern Nigeria, still suffer from considerable civil strife. Even where progress has occurred in some conflicts, it is often reversible. All that said, Africa’s picture in terms of warfare, like its situation in terms of the health care consequences of coronavirus, could be much worse.

All this brings us to the big problem in 2020 on the continent, the proverbial eight-hundred-pound gorilla—the economic spillover effects from the coronavirus crisis, and with them, the danger of political instability or worse in a number of key countries. Restrictions on travel and the flow of goods and services due to coronavirus have exacerbated the issue of food security across the continent. Currently half of Africans already face food insecurity, and that number is increasing in 2020. Because of the lack of infrastructure necessary for telework or tele-education, many face the Hobson’s choice of either staying home to avoid contagion or going out to get essentials for themselves and their families.

To prevent the growing risk of instability and conflict, the international community will need to help African nations in ways it has not yet undertaken. High on the list should be debt relief and other macroeconomic assistance. African nations also desperately need greater access to testing kits for the pandemic to help restart the continent’s economies—and vaccines when they become available. More testing capacity could prioritize truck drivers as well as health-care workers and vulnerable populations—to make possible the restoration of more commerce, including food delivery.

To be sure, coronavirus is a tragedy the world over, and it will be a drag on the world economy for some time to come. But there are ways to mitigate its effects on an African continent that is already showing greater resilience, and greater promise, then many would have thought possible even a few short years ago.

Shanice Arlow is a recent graduate of St. Lawrence University and intern at the Brookings Institution, where Michael O’Hanlon is a senior fellow.