How the West Got Russia and Ukraine Wrong 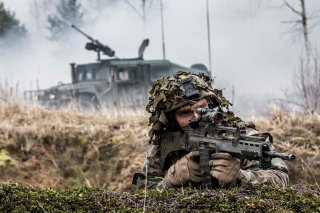 The War Nerd said it best on Twitter: “I was wrong. I. Was. Wrong.” Yeah, me too. I didn’t think Vladimir Putin would do something this big and this dangerous. I considered the nexus of the immediate crisis to reside in the disputed territories held by the Donetsk (DPR) and Luhansk People’s Republics (LPR). Putin’s invasion shows that these territories were not his true red line, but rather the entire thrust of Ukrainian policy since 2014.

After the February 2014 revolution, Ukrainians dedicated themselves to restoring their sovereignty over the lost territories in Crimea and the Donbas, subordinating everything else, including economic recovery, to that goal. Whether they would do it peacefully or by arms was not clear, and opinion tossed to-and-fro about that in Ukraine.

However, that they would do it was an axiomatic conviction and not to be questioned. Ukrainian president Volodymyr Zelenskyy made it the centerpiece of his administration in early 2021 with his Crimea Platform. Discriminatory policies against Russophiles intensified in 2021, symbolized by the implementation in January of a language law requiring that all public-facing people address others in Ukrainian, speaking Russian only when asked. The media empire of Victor Medvedchuk, a Putin friend and leader of Opposition Party—For Life, was shut down and his assets seized. He was arrested for treason and put under house arrest. Anyone who opposed these policies was deemed treasonous. A government minister announced a twenty-five-year plan with the goal was of ensuring that Russophiles and their children would learn to talk and think right. It was this constitution of Ukraine as “anti-Russia,” whose soul and breath was the denial that Ukraine had ever been a part of such a despised and feared identity, that turned out to be Putin’s red line.

I hate war. From the depths of my being, I hate it, so I am obliged to hate Putin’s war with all the rest. I also hate being lied to. I have steamed for twenty years at the lies the American government has told about its ill-conceived and illegal interventions. It is good to know that Russian foreign minister Sergey Lavrov, spokesperson Maria Zakharova, and their whole crew at the United Nations lie with even greater aplomb.

Two Wrongs and Making a Third

Though I was wrong about the scale and objectives of the Russian invasion, I don’t think the other side was right. The emerging situation, so catastrophic for Ukraine and for the hope of a peaceful world order, is the endpoint of “liberal hegemony” as it was conceived and practiced in the unipolar era. Those plans, predicated on U.S. military supremacy, assumed that the United States could act without regard for the red lines of Russia and never meet a brick wall. This colossal misjudgment did not account for the inevitable gap between the “vitality of interests” as conceived by each side. Each addition or threatened addition to NATO in the east carried with it an implied diminution of the credibility of U.S. military threats. This was true of the Baltics, true of Georgia, and true most of all of Ukraine.

Biden made it clear in December that no U.S. forces would be deployed to Ukraine if Russia invaded. Perhaps realistic observers should have known this all along, but it was not the understanding of Ukraine’s nationalists for most of 2021. They saw in Biden’s administration the likelihood of a more aggressive U.S. policy towards Russia. They thought that Azerbaijan’s victory over Armenia had meaning for the balance of forces vis-à-vis the two embattled statelets in the Donbas. They were gladdened by an administration that put Ukraine at the top of its agenda from day one. It now seems certain that they feel deeply betrayed by the United States. As Biden showed last December, Ukraine has lots of friends, but none who are willing or able to help them when they need it most.

An ironic feature of the U.S. commitment to Ukraine’s military rejuvenation is that it was inescapably directed toward beefing up Ukraine’s forces against the LPR and DPR. For ten good reasons, however, the United States could not build a military force in Ukraine that would be capable of taking on the Russian armed forces, with their panoply of cruise missiles, fifth-generation fighters, and the rest. Ukraine is entirely outclassed in that respect. Ukrainian military dispositions are shrouded in secrecy, but the infantry concentrated in the east makes them a sitting duck for encirclement, followed by annihilation or surrender. All that military aid was basically sent in vain, directed toward a purpose subject to a massive Russian veto.

For their part, the Ukrainians needed no instruction from the United States to embark on a policy of de-Russification. When Zelenskyy shut down Medvedchuk’s media companies in February 2021, it was viewed as a gift to the newly arrived Biden administration. After 2014, “you’re either with us or against us” became a pronounced feature of Ukrainian politics, and Washington’s encouragement in 2021 made it worse. Autonomy for the Donbas, the formula contained within the February 2015 Minsk-2 Ceasefire Agreement, was considered treasonous by powerful forces in Ukraine. For example, Zelensky was warned by nationalist militia leader Dmytro Yarosh after his election that such an offer would come at the price of his neck. Just a few days ago, the editor of the Kyiv Independent wrote in the New York Times that any concession to Russia over the status of eastern Ukraine would bring about the same fate for Zelenskyy that befell Victor Yanukovych, who was tossed from power in 2014. The United States supported all these steps, looking simultaneously toward bolstering Ukrainian nationalism and blasting the Russophiles.

To me, it seemed like folly for Ukraine to go down a path so antithetical to both its wealth and its security, and folly for the United States to encourage it in its course. But that is what America did.

America’s original sin in Ukraine was supporting the February 2014 Euromaidan Revolution. All the “pro-democracy” people in the West cheered the overthrow of the duly elected government even though it was a gravely unconstitutional act that overturned Ukraine’s constitution. Waiting for the next election to throw the bums out, the most sacred ritual of constitutional democracy, was deemed terribly regressive by the democracy-preachers at the State Department and the National Endowment for Democracy. Ironically, the same cast of characters who cheered on the Euromaidan Revolution (i.e., the entire Democratic Party, plus Liz Cheney), have been obsessing for the past year over America’s own recent experience with the threat of mob rule.

The big difference between what the bumblers of January 6 did and the architects of Ukraine’s February 2014 revolution did, is that the latter was successful and the former never had a chance of succeeding, as Vice President Mike Pence and Republican leader Mitch McConnell made crystal clear before the mayhem began. What happened on January 6 was awful and gross, though more stupid than anything. What made it obscene was the desire of the rioters to impede or overturn (without a plan) the most critical procedures of constitutional democracy. Yet, how could something so obviously wrong in America be manifestly right in Ukraine? How could this U.S. message to the Ukrainians in 2014, in which the United States gave full diplomatic support to the mobocracy, even begin to approximate what America’s wisest leaders have told us about the sacredness of elections and the peaceful transfer of power?

Democracies have been known to soldier on through terrible crises and unbridgeable chasms because no one took the step that cratered its foundation. Perhaps Ukraine could have found a way to do so, such that a new election in 2015 would have brought a reformer to power promising to reverse Yanukovych’s approach to Europe while not grossly offending Russia. There were people in Ukraine who wanted to do that, and they probably held the balance of electoral power. But that was not the course the United States followed. Instead, it said, “victory to the hotheads!” Assistant Secretary of State Victoria Nuland didn’t tell the demonstrators to go home and work to win the next election, rather, she held out promises of further aid and support. Nuland even had a list of cabinet ministers for the new government.

In the immediate aftermath of the Euromaidan Revolution, in the presence of Russian troops, the people of Crimea voted for annexation by Russia in a hastily-called referendum and received it by an act of the Russian Duma. In Ukraine’s western provinces, Yanukovych received 10 percent of the vote while in Crimea he received 90 percent. The Crimean referendum was quickly condemned as a violation of Ukraine’s constitution, but then so was the seizure of power in Kyiv that preceded it.

In international law, if one side violates the terms of a bilateral treaty, the other ceases to be bound by its terms. In constitutional law, the issue is not as straightforward. Charges of unconstitutionality are part of the steady diet of American politics, for example, yet do not normally entail insurrections by the disaffected. On the other hand, changing the electoral rules to meet the demands of a large crowd is no ordinary violation. Most constitutional controversies turn on the extent of a government’s authority—they answer the question of what limits are to be placed on the exercise of government power. The February 2014 Revolution turned on who is to hold it. The latter is the most basic question that constitutions seek to answer. There are few settings in which the egregious violation of basic electoral rules does not raise the danger of civil war and it instantly produced one in Ukraine. If America has a civil war in its future, odds are it will arise from a dispute over the legitimacy of a presidential election.