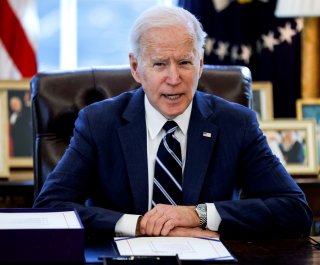 Iran’s Supreme Leader must be pleased another American president is desperate for a nuclear deal. The United States has all the leverage, yet President Joe Biden is rushing back to the flawed 2015 nuclear agreement, even though Iran cheated from the outset. Instead, Biden should use America’s leverage to secure a deal that puts a permanent end to Tehran’s pursuit of nuclear weapons by dismantling its enrichment program.

National Security Advisor Jake Sullivan explained earlier this month that the purpose of the ongoing negotiations in Vienna is to determine which “nuclear restrictions Iran will accept on its program to ensure that they can never get a nuclear weapon.” Therein lies the core problem with the accord: it will never prevent an Iranian nuke because instead of prohibiting Iran from enriching uranium and plutonium, it relies on a maze of unenforceable and eventually expiring restrictions to prevent the regime from weaponizing its enrichment program.

In light of the numerous concessions Tehran secured as part of the 2015 agreement, zero enrichment may seem like an extraordinary demand. Yet not long ago, zero enrichment was the accepted policy. In 2006, the United Nations Security Council passed Resolution 1696, demanding that the Islamic Republic “suspend all enrichment-related and reprocessing activities, including research and development.”

Despite abandoning that position, former President Barack Obama sold the 2015 nuclear deal as ensuring “that all pathways to a bomb are cut off.” Yet enrichment itself is the pathway to a bomb. Obama touted the constraints the deal imposed on Iran’s nuclear program, yet restrictions on the production of enriched uranium end completely in 2031, less than ten years from now.

To ensure Iranian compliance, Obama said, the accord has “the most comprehensive inspection and verification regime ever negotiated to monitor a nuclear program.” He added, “The bottom line is, if Iran cheats, we can catch them—and we will.” We now know that is not true. The International Atomic Energy Agency (IAEA)—the nuclear watchdog responsible for inspections—did not know about Iran’s undeclared nuclear activities until it examined the nuclear archive Israeli agents smuggled out of Iran in 2018.

Last month, Tehran began enriching uranium to 60 percent purity, a significant step toward the 90 percent+ level needed for an atomic bomb. There is no legitimate, civilian use for this activity. Also, this level of purity is well above the 3.67 percent envisioned in the 2015 deal.

The Vienna negotiations reportedly have not led to an agreement on how Tehran will reverse these nuclear gains, especially whether the advanced centrifuges integral to this level of enrichment will be destroyed, removed from the country, or stored locally.

And there is another serious problem. The United States has a policy where it asks its allies to forgo the development of enrichment and reprocessing capabilities before they can receive any support for peaceful nuclear energy programs. This is known as the gold standard and its rationale is simple: these techniques can be used to produce fissile material for nuclear weapons.

America’s Gulf allies are starting to notice the hypocrisy of the United States asking them to adopt the gold standard while Iran keeps its enrichment program. Yousef Al Otaiba, the United Arab Emirates ambassador to the United States, noted that the UAE agreed to the gold standard in 2008, hoping it would be a model for when the U.S. negotiates with the Islamic Republic. Otaiba explained that the “problem was [U.S.] partners became . . . committed and assured to a gold standard that is safe and secure for nuclear power and [U.S.] adversaries got a better deal.”

Mohammed bin Salman, crown prince and de facto leader of Saudi Arabia, said in 2018 that if Iran develops nuclear weapons the kingdom would “follow suit as soon as possible.” The most likely path would require Riyadh to develop enrichment or reprocessing technologies.

If the UAE and Saudi Arabia pursue uranium enrichment programs, then that could set off an arms race in the Middle East.

It is not too late for Biden to reverse course. Tehran’s negotiators have pushed a maximalist position requesting the removal of nearly all sanctions. The Biden administration should walk away and use its significant leverage to push for the “longer and stronger” deal Secretary of State Antony Blinken promised. The best way to make a deal longer and stronger is for it to mandate the elimination of Iran’s enrichment program. That accord could secure the bipartisan support necessary to be ratified as a treaty by the U.S. Senate. That way, it would remain intact during the next Republican administration.

Tehran will balk, of course. It will try to convince our European allies to blame the United States for walking away. The Islamic Republic could also respond with military strikes against U.S. troops or allies in the region, but the U.S. has the upper hand militarily and can restore deterrence.

Another response would be for Tehran to ramp up its enrichment program. But Iran’s nuclear extortion has an expiration date. The explosions at the Natanz enrichment site show the fragility of the clerical regime’s prized, supposedly secure, asset. The United Kingdom, and perhaps France and Germany, will join a pressure campaign if Iran overplays its hand. A unified or U.S.-UK sanctions campaign will send the Islamic Republic a strong message that it cannot divide America and its allies. Iran will not be able to withstand another unified pressure campaign.

Just because it will be difficult to return to a zero enrichment policy doesn’t mean the United States should pursue a limited, flawed agreement instead.

The United States is at an inflection point. Now is the time to reverse course.

Anthony Ruggiero is a senior fellow at the Foundation for Defense of Democracies (FDD), he previously served in the U.S. government for more than nineteen years, most recently as the National Security Council’s senior director for counterproliferation and biodefense. Follow Anthony on Twitter @NatSecAnthony. FDD is a Washington, DC-based, nonpartisan research institute focusing on national security and foreign policy.