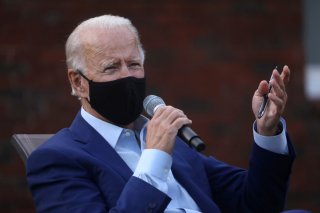 Actually, the parts that are good but not original create some problems for the former vice president. They raise the question of why they were neglected, went nowhere, or didn't accomplish much in the eight years when Biden was President Barack Obama's second-in-command—when they were all either brought before Congress or put into effect.

In fact, when it comes to one of the most attention-getting provisions of the Biden plans—greatly expanding the use of federal Buy American requirements to boost demand for manufactured goods, tightening enforcement, and narrowing or eliminating loopholes—similar measures were actively opposed by Obama during the worst of the Great Recession of 2007-09. His rationale was, “I think it would be a mistake . . . at a time when worldwide trade is declining, for us to start sending a message that somehow we’re just looking after ourselves and not concerned with world trade."

Ditto for stronger responses to trade and broader economic predation by China—nowadays a Biden bete noire whose “unfair trade practices” and “abuses” he and his campaign have specified in various statements include “robbing the US of our technology and intellectual property, or forcing American companies to give it away in order to do business in China.” along with currency manipulation, dumping of below-cost exports, and “state-owned company abuses, or unfair subsidies,” and that have “got to end.”

Yet China’s beggar-thy-neighbor mercantilism had been well-established throughout Biden’s years at Obama’s side. Obama decried it—especially currency manipulation—during his initial run for the White House. His administration’s approach was considered so ineffective, however, that President Donald Trump made historic inroads with traditionally Democratic-leaning blue-collar voters in the Rust Belt and elsewhere during the 2016 election.

As for indispensable and more domestic-focused manufacturing promotion policies, like boosting federal support for research and development or creating government programs to help domestic industry learn about and utilize technological breakthroughs, it’s true that congressional Republican opposition either doomed them from the start or ensured they'd remain small beans. And the Trump administration has given them a short shrift.

But successful presidential leadership entails winning over the opposition—including mobilizing public pressure if necessary. Recall that Biden was Obama’s chief negotiator with Capitol Hill on numerous issues like budget fights. Either the previous administration flunked these acid tests of politicking or these manufacturing-related issues never made the top-priority list.

Even leaving his will aside, however, Biden’s collective manufacturing blueprint will still face major obstacles stemming from its main head-scratching proposal: penalizing the offshoring of domestic manufacturing with taxes. The big problem: one of these taxes is essentially a tariff.

For on top of imposing a 10 percent penalty on the U.S.-owned firms that move operations abroad, increasing from 10.5 percent to 21 percent the minimum tax paid by such companies on revenues earned overseas, and offering businesses a 10 percent tax credit for making job-creating domestic investment. Biden would also slap a 30.8 percent “surtax” on profits from goods and services produced by domestic companies’ overseas affiliates and sold to domestic companies.

By U.S. standards, that levy is towering—higher than any of Trump’s tariffs on Chinese goods, or on metals. The goal of all these measures is admirable—reducing these businesses’ temptation to supply the lucrative American market from facilities in countries like China and Mexico, which offer super-low, labor and other production costs and/or lavish subsidies, instead of from facilities in the United States. And the charge on imports from American companies’ foreign facilities would seem especially effective in raising the cost of supplying the U.S. market from abroad versus generating these sales from domestic facilities.

This penalty would apply only to imports originating from facilities owned by Americans though. Imports from any other facilities would get off scot free. Therefore, the surtax could well prompt U.S.-owned firms to contract out still more of their production and services provision to those foreign-owned entities. And let’s say such transfers weren’t always possible. Those that did take place would deliver new business to foreign competitors—including China’s state-owned or controlled entities—without relieving domestic companies and workers of any overseas competitive pressures they face, fair or otherwise. A standard, Trump-like tariff preempts this outcome by hitting imports no matter where they originate.

In addition, because Biden’s tax is tariff-like, to the extent that it did succeed in replacing imported production and employment with domestic output and jobs, it would crash into the same problems that have plagued—but not deterred or halted—Trump's tariffs. If the World Trade Organization (WTO) dispute-resolution system was still working, then it would probably be struck down as illegal. The suit, moreover, would be supported by that strong majority of WTO members which rely heavily for their own growth and employment on amassing trade surpluses with the United States. These plaintiffs, moreover, would include nearly all of America's treaty allies.

In other words, the Biden offshoring surtax—which is unilateral—would undoubtedly raise exactly the kinds of foreign hackles as the unilateral Trumpian trade wars and tariffs that the Democratic standard-bearer has denounced variously as “damaging,” “wreckless,” “disastrous,” shortsighted,” and counterproductive. In particular, it would torpedo his practically defining insistence that the best way to “stand up for America” trade-wise is to “Rally our allies in a coordinated effort to pressure the Chinese government and other trade abusers to follow the rules and hold them to account when they do not.”

Even if Biden decided to roll America’s allies and the WTO, it’s far from clear how much production and jobs reshoring these Biden measures actually would encourage. The net advantages would be uncertain even throwing in a “fee” (which has yet to be specified) or quotas on imports of “carbon-intensive goods from countries that are failing to meet their climate and environmental obligations”—presumably whether they come from U.S.- or foreign-owned facilities.

After all, in addition to the opportunities, U.S.-owned firms will have to skirt the 30.8 percent tax via contracting. These same companies will face an overall corporate tax that Biden would increase from 21 percent to 28 percent, along with a new “minimum book tax” in the case of businesses that have managed to avoid all American taxes lately. Many of the goods and services creation that was reshored would still face charges that were less than three percentage points lower than those paid on goods and services provided from abroad. And the most successful tax evaders would wind up paying higher net taxes than at present. Worse, all companies that returned stateside would wind up paying the typically considerable costs of moving operations per se—costs that would only be partly offset by the 10 percent credit provided for such relocation. By contrast, Trump has raised business costs with his own tariffs, but cut them with his 2017 tax cut. And calculations by the tariff-hating Tax Foundation indicate that the former have offset only about half of the latter.

In that vein, comprehensively evaluating the Biden manufacturing and reshoring plans requires not only comparing them with their Trump policy counterparts, but assessing the current administration's record, which is hardly the disaster that Biden and so many other critics describe. The official data shows that before the coronavirus struck, average annual manufacturing job creation under Trump was stronger than it was during the Obama years. That was despite the major drags created in 2019 by Boeing's safety woes and a six-week General Motor strike. Manufacturing output was also stronger under Trump. These achievements look even better upon realizing that the trade policy transformation sought by Trump inevitably created short-term inefficiencies as businesses went about adjusting.

Trump trade policy, moreover, deserves some credit here. In fact, this fuller assessment suggests a major irony: An American political system determined to make even faster progress in reviving manufacturing would borrow from both the Biden and Trump blueprints. The Biden levy on imports from U.S. corporate foreign affiliates would be expanded to produce Trump-style conventional tariffs. The Biden carbon tariff could be applied as well, along with a generous Biden-like tax credit for reshoring and Biden’s penalty for offshoring. It would be nice to throw in a policy of keeping overall corporate taxes at roughly their current Trumpian levels—but structuring them to channel more rewards toward greater domestic investment and fewer to stock buybacks and other forms of unproductive financial engineering—and a commitment to regulatory restraint that Republicans and conservatives will appreciate. The plan could also use more federal funding for research and development, which would appeal to Democrats and liberals (and some reform-minded Republicans). Under that umbrella, a major restoration of American manufacturing vibrancy not only becomes entirely conceivable, it becomes likely.

Alan Tonelson is the Founder of RealityChek, a blog on economics and national security.