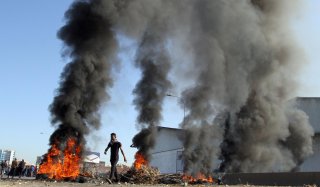 Overwhelmed by the harsh economic conditions afflicting Lebanon, Lebanese citizen Ali al-Haq decided to end his life before the eyes of passers-by on the capital’s busy Hamra Street. He shot himself leaving a sign emblazoned with the sentence “I am not an infidel, but hunger is the infidel.”

Alas, this tragic incident on July 3, 2020, is no longer isolated and manifests the desperation of many Lebanese people who have lost their livelihood to endemic political corruption, historic theft of their savings, economic collapse, governmental kowtowing to Hezbollah’s so-called “axis of resistance,” and consequences of American maximum pressure policy. If physical death is not enough, then Lebanon’s historic cultural heritage is also threatened by a stoic resignation to an eastward re-orientation. Unless helped by the United States and Europe, Lebanon’s constitution and national character stands to be changed beyond recognition.

Reflecting on Lebanon’s abysmal condition and its urgent need for help, the Maronite Patriarch and Cardinal Beshara B. al-Ra’I delivered a sermon on July 6 in which he summoned international assistance. He stated:

We ask friendly nations to hasten to help Lebanon as they did when it was in danger. We turn to the United Nations to work to restore the affirmation of Lebanon’s independence and unity, the implementation of international decisions, and declare its dissociation . . . Lebanon’s dissociation is its power and the guarantor of its role in the stabilization of the region and the defense of the rights of Arab countries and the cause of peace, as well as in the healthy relationship between the countries of the Middle East and Europe given its location on the Mediterranean sea.

This Cri de Coeur from Lebanon’s preeminent Christian authority, whose church played a key role in founding the state, attests to the grave danger of Lebanon’s dissolution as a nation and as a Levantine culture. Moreover, the patriarch appears to have lost faith in the ability of the political elite to salvage Lebanon.

The Maronite Church traces its relationship with Europe, especially France, to the Crusaders. France, by the beginning of the nineteenth century, had begun to systematically attempt to acculturate Christian society along French intellectual and cultural lines. Acting in the capacity of France’s cultural arm, the French Jesuit order established a chain of schools, and most importantly, Saint Joseph University in 1875 in Beirut, which soon evolved into the nodal cultural center linking Beirut to Paris. Parallel to French missionary activities, Americans established the Syrian Protestant College in Beirut, today’s American University in Beirut, in 1866 to advance their universal values and popularize them through the medium of the Arabic language. When on September 1, 1920, the French High Commissioner Henri Gouraud proclaimed the establishment of the State of Greater Lebanon, the Maronite Church perceived the statement as a reflection of the longstanding cultural and political kinship, mythical and/or constructed, between them and the West, especially France, earnestly called “La mere du Liban.”

Significantly, the creation of Greater Lebanon shrank the demographic majority of Christians as Muslim-majority areas were added to Mount Lebanon, the abode of Maronite Christians. However, Sunni opposition to Greater Lebanon dissipated as the country began to champion its independence from France. In fact, a Maronite-Sunni alliance churned out the National Pact (al-Mithaq al-Watani) as the basis for Lebanon’s national identity and political system. While political power would be distributed along religious (confessional) lines according to the 1932 census, which granted Maronites the lion share of political power, Lebanon’s identity would be characterized by an “Arab face” and manifested by the slogan “No East, No West.” This formula allowed Lebanon to maintain a balanced relationship with both the West and the Arab world.

However, Lebanon’s weak national identity and quasi-democratic system made the country a lightning rod for almost all political currents sweeping the Arab world since the Arab defeat in the 1948 War and through what Malcolm Kerr famously described the Arab Cold War. No sooner, leftists, pan-Arabists and pan-Syrians, advocated supporting the Palestinian question as the Arab cause par excellence and removing Christian hegemony from the state. Palestinian militant activity targeting Israel heightened the tension between the two camps. This led to Lebanon’s civil war, which lasted from 1975 until 1990, and to Israel’s invasion of Lebanon in 1978 and 1982, following which Israel occupied a swath of Lebanese territory on its northern border. As the war progressed, inter and intra-communal and Lebanese-Palestinian strife marked the social landscape until Syria, with support from Saudi Arabia, brokered the Document of National Understanding which ended the civil war.

The end of the civil war, in principle, has been premised on an equitable redistribution of confessional power in the system. In practice, however, the end of the civil war marked the Syrian occupation of the country until the withdrawal of its troops in 2005. The Shiite Islamist party Hezbollah replaced the Syrian regime as the hegemonic power in Lebanon. This is so because during the Syrian occupation of Lebanon, Hezbollah, unlike other militia or political group, was not only allowed to keep its weapons but also, thanks to Iran and Syria, to enhance its political and military power as a bulwark against Israel’s power and occupation of southern Lebanon.

Ominously, since the end of the Civil War in 1990 until the present, Lebanon’s political elite have forged a Faustian deal with Hezbollah grounded in preserving national coexistence; but practically expressed in providing political cover for Hezbollah in return of an extraordinary theft of the state by the political ruling class, which gradually made Lebanon as a nation and a state a shell of its former self.

Confessional bickering and sloganeering, opposition to Hezbollah’s domestic and regional military role and skirmishes were mere shows for public consumption. Actually, the thirst of the political elite’s corruption was never satiated and Hezbollah’s regional military forays only deepened. Both political and economic bankruptcy and Iran’s regional plans and ambitions stood at Beirut’s gate. Finally, bearing no more consistent political and economic rape, Lebanese from across the religious spectrum launched the October 17 rebellion. They have fought for reforms and saving the country from the clutches of a mafia-like political class. Their slogan “Kullun Ye’ni Kullun,” connoting the ouster of the whole political ruling class without exception, echoed across the streets of Lebanon. The steady collapse of the economy, the steep downfall of Lebanon’s currency as pegged to the dollar and the poaching of the people’s savings have starved society into humiliation, begging and/or scavenging of uncollected garbage piled into mountains of fetid and fusty trash.

This only hardened the determination of the rebels to continue their struggle. Unfortunately, their protests have been blunted by rogue elements, an absence of a unified leadership and singularity of purpose, governmental security interception, interference by political parties’, and hoodlums of Hezbollah and its ally Amal. They have been beaten, pushed, harassed and circumscribed in their activism. Though their spirit remains indomitable, their activism has become disarrayed. In the meantime, U.S. maximum pressure policy on Iran and its proxies, especially on Hezbollah, and its ally the Syrian regime via the Caesar act, which sanctions third parties trading with the Syrian regime, has had the unintended consequence of exacerbating the economic condition of ordinary Lebanese, many of whom are critical of Hezbollah.

In response, Hezbollah and its allies have offered the bait of preventing starvation by dangling their ability to feed the hungry and circumvent American sanctions, which Hezbollah blames for the bleak Lebanese political and economic condition. Most importantly, Hezbollah is clearly exploiting the desperation gripping many Lebanese to bring about both their capitulation to its diktat and stoic resignation to reorient the country towards Iran and China. The political parties and elites, which have ruled Lebanon since 1990, have been either complicit with Hezbollah or no match to its political maneuvering. Most of them still hedge their political survival on the stability equation of national coexistence, and on protecting their enormous illicit fortunes with the help or silence of Hezbollah. In fact, the government has thus far failed to hold any politician or public figure to account, despite repeated calls by the rebels; and, as one astute activist conveyed to me, the IMF’s negotiations with the government for a loan have been hampered by its reluctance to agree on substantial reforms, fearing they will divulge the whopping theft of the country by the “confessional kings” and their allied political elite.

It is against this background of collective national desperation and governmental bankruptcy that the preeminent Christian authority in the land delivered his Cri de Coeur. His was undoubtedly an urgent call for help to prevent the political, economic and cultural demise of a nation. Without naming Hezbollah, he acknowledged that the Islamist party’s actions have made Lebanon isolated and gravely facing off the international community. He advocated Lebanon’s dissociation from the regional and international axis of powers and supported the implementation of international decisions, clearly in reference to UNSCR 1559 that calls for the disarmament of Hezbollah. He also called for the international community to rescue the nation as times past. He is essentially worried that hunger is providing an opportune moment for Hezbollah and their allies to impose their political will on the population at large and put the final cultural nail in Lebanon’s Mediterranean coffin.