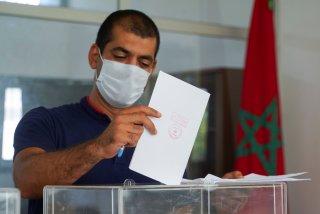 The Taliban’s seizure of Kabul and appointment of a cabinet of bearded extremists have given many of America’s talking heads the notion that democracy just can’t work in a Muslim country.

They couldn’t be more wrong. Morocco is an overwhelming Muslim land, which has been conducting local multi-party elections in a way that all observers agree is peaceful, fair, and free.

Voter participation is climbing. More than 50 percent of eligible voters participated, up from the 43 percent who voted in the last parliamentary elections five years earlier. In the dry and sparsely settled region once known as Western Sahara, some 66 percent of eligible voters turned in their ballots. For the people of that region, which was once torn apart by violent separatists, voting has a patriotic value. It allows citizens to express their attachment to the kingdom of Morocco and support America’s recent decision to recognize Moroccan sovereignty over the Sahara.

And the elections had real consequences. The Islamist Justice and Development Party (known its French-language initials, PJD) has led the government since 2012, in a coalition with others parties. This time the Islamist party’s support tumbled to seventh place, with only thirteen members of parliament elected under its banner.

Ballots, not bullets, defeated the Islamists. Brought to prominence by the “Arab Spring” movements, the PJD won support from university-educated city dwellers and some traditionalists in the countryside. As a result, the Islamists were able to lead two successive governments, in a peaceful political framework, with the monarchy playing its constitutional role. But the Islamists failed to create enough jobs or produce enough affordable housing to satisfy young voters, while business owners tired of their unwillingness to modernize taxes and regulations. For eminently practical reasons, political Islam has been cast aside—without fighting.

Now, new ideas and new people will replace the Islamists. The RNI, a liberal-social party close to business leaders, will lead the new coalition government. At least one party of the Left is expected to join the coalition, meaning the government will have a focus on social issues.

The Moroccan experience proves that democracy is the solution. By making the Islamists a part of the democratic process, Morocco gave its citizens a chance to inspect and weigh the fruit of their ideas. And the people, after nearly a decade of second chances, decided the Islamists didn’t have the solutions that they needed.

While President Joe Biden was right to bring Americans home from Afghanistan, the idea of democracy outside of Western lands should not be discarded so thoughtlessly.

For geopolitical, or even practical reasons (it needs to get its citizens and allies out), the United States is obliged to maintain contact with Afghanistan’s new rulers. But Washington should not formally recognize the Taliban government. It stole power with the smoking barrel of an AK-47; it did not win it through the steady persuasion of Afghan voters. The Taliban had many chances to take part in Afghanistan’s regular elections from 2003 to 2021. It chose not to. The Taliban government is simply not legitimate, just as the receiver of stolen goods is not their rightful owner. Let’s not forget, as the anniversary of the September 11 attacks approaches, that the Taliban, Hamas, Hezbollah, and other jihad groups are armed terrorist movements. Any weakness towards them is dangerous.

On the other hand, the Moroccan experience proves that democracy works and that letting those the Islamists, who accept democratic rules, contest elections can lead to them being brought peacefully to power, but that can just as peacefully push them out of power too. In the end, voters are smarter than analysts give them credit for.

Ahmed Charai is a  publisher of The Jerusalem Strategic Tribune. He is on the board of directors for the Atlantic Council, an international counselor of the Center for Strategic and International Studies, and a member of the Advisory Board of The Center for the National Interest in Washington, and the global board of the Jerusalem Institute for Strategy and Security in Jerusalem.