A New U.S.-Pakistan Relationship Is Emerging 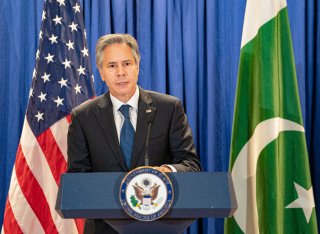 U.S.-Pakistan relations are on the mend. It isn’t clear how far they will go or where they are headed, but both sides are keen to move forward after a decade of contentious engagement that brought the relationship to one of its lowest points in history.

For the past two decades, the U.S.-Pakistan relationship derived its strengths and weaknesses primarily from the war in Afghanistan. Pakistan provided the U.S. military with critical logistics support and valuable intelligence, for which it received significant American aid and security assistance. But Washington’s failure in Afghanistan rendered Pakistan’s help futile. And as Pakistan suffered major blowback from the war, it made American aid to Islamabad inconsequential.

Pakistan’s successful efforts to bring the Taliban to the negotiating table also became immaterial, as the Trump administration’s deeply flawed, one-sided deal helped the Taliban win the political battle without a military victory. Then, former Pakistani prime minister Imran Khan’s jubilation over the Taliban’s victory and criticism of U.S. policies in the American media added insult to injury, provoking backlash in Washington. Senate Republicans vented their anger by once again blaming alleged Taliban sanctuaries in Pakistan for the failure in Afghanistan and threatening to sanction Islamabad.

Yet, cooler heads prevailed, and the damage was contained. At a Congressional hearing in September 2021, Secretary of State Antony Blinken said that going forward, Washington will look not just at “the role that Pakistan has played over the last 20 years but also the role we would want to see it play in the coming years and what it will take for it to do that”.

With the Afghanistan War in the rearview mirror and Khan no longer in power, the United States and Pakistan have been walking back from the brink and searching for a new meaning to their relationship. The reality is that in the nearly seven decades of U.S.-Pakistan relations, despite their lack of continuity and strategic consensus, the two countries have kept coming back to each other. Even their troubled post-9/11 engagement was not without major accomplishments, as Pakistan provided critical military and intelligence support for America’s efforts to weaken Al Qaeda and advance U.S. and global security. The security challenges remain, as does Washington’s need for Pakistan’s cooperation, for which there is no alternative following the American withdrawal from Afghanistan.

But gone are the days when the United States could just come back and reignite the relationship as if nothing had happened while it was away. Pakistan has long been in the grip of anti-Americanism, incited by America’s image as an unreliable ally that has manipulated Pakistan’s political system to its advantage, an image further inflamed by Khan’s allegations that Washington conspired to have his government removed, which are baseless but compelling to his base.

The United States and Pakistan now realize that if their ties are to be revived, they must be sustainable, mutually beneficial, and have public support. The stimulus for revival has come from both sides, though the initiative may have come from Washington, which is finally focusing on Pakistan, having been freed from the Afghanistan War and possibly provided a strategic pause by India’s ambivalence over the Russian invasion of Ukraine. It is evident that India’s interests in Russia are many and will endure. Indeed, India prefers “multi-alignment.”

Could this re-engagement with Pakistan be Washington’s own multi-alignment? For a start, last September, Washington announced a potential $450 million sale of F-16 aircraft sustainment to Pakistan over the objections of India. While India will remain a critical part of the American Indo-Pacific strategy, the centrality of India to U.S. policy in South Asia may not be in Washington’s interests.

Washington has important stakes in Pakistan, where it needs an independent policy that stands on its own. Pakistan is at the confluence of multiple U.S. concerns and interests that cannot be dictated by the Indo-Pacific strategy alone, such as China, Russia, the Taliban, counterterrorism, nonproliferation, nuclear security, and climate change. In any case, as Raja Mohan notes, “Pakistan occupies a vital piece of real estate that sits between the subcontinent, Iran, Arabia, Central Asia, Russia and China and is too important to be isolated.”

Pakistan has also been rethinking the relationship. There is a growing sentiment, especially among the ruling establishment, that the country’s mounting economic difficulties, rising challenges to internal stability, and continuing external security threats require good relations with Washington, particularly as China may not be the answer to all of Islamabad’s problems (nor should it be). However, the U.S.-Pakistan relationship can no longer be based on the rentier model that has largely defined it since the two sides’ initial engagement from 1954 to 1965, when the United States, to its credit, strengthened Pakistan’s defense capabilities and potential for economic development, offering critical help in stabilizing the emergent state.

But since then, it is not Pakistan but its services that have been important for Washington. And Islamabad allowed Washington to play into the power imbalances and structural weakness of its elite-based system and become an external pillar to sustain the system. Thus developed a co-dependency between the two countries that serviced faulty policies on both sides, setting each other up to deflect blame for their own failures and increasing contention in the relationship.

This bargain, as well as Islamabad’s traditional role as an adjunct to America’s wars, which proved costly to Pakistani interests, has been discredited in the eyes of the Pakistani public. Given the country’s economic vulnerabilities and political instability, there is now increasing talk in Islamabad of a foreign policy of “geo-economics,” for which regional stability and a reoriented relationship with the United States would be important. Knowing that a high-profile aid relationship with the United States is neither possible nor desirable at the moment, Pakistan is interested in investment, trade, and support in international financial institutions, particularly the International Monetary Fund. The United States happens to be Pakistan’s largest trading partner and export destination.

Pakistan desires to broaden the scope and scale of the relationship, but America’s priorities remain limited—focused on China and Afghanistan/terrorism—though Washington may pursue these priorities in a broader context. The United States does not have critical economic interests in Pakistan, but its economic ties with Islamabad may be important to the realization of its objectives there. Many areas of potential cooperation, including energy technology, agriculture, and IT, are being discussed. Washington also wants to help in healthcare and education. Overall, a Pakistan that is secure and economically and politically stable may be key to achieving U.S. security and strategic objectives in the region.

Pakistan’s policy shifts, including its aspirations for geo-economics and better relations with the United States, and its professed desire to seek peaceful relations with India, are aligned with America’s broader goals in South Asia. Of course, Washington has always been in favor of peace between India and Pakistan—though it has never done much to promote it outside of occasional crisis management—but it is more interested in stability now because of its Indo-Pacific strategy. Washington may also hope that an American alternative can contain Pakistan-China relations, further advancing its regional strategy.

But Washington realizes that if it wants to re-engage with Pakistan, it will have to contend with the country’s pervasive anti-Americanism. As a result, America’s immediate focus is on actions that are of high public interest in Pakistan, like its much-publicized flood relief and reconstruction aid. And in its statements and actions, the United States is giving the impression that it is not returning to Pakistan to further its own agenda by buying friendships that benefit the elite but hurt the people. Instead, it has come to pursue “shared interests.” That is why the focus is on counterterrorism. Pakistan has once again become a victim of terror and a partner in the fight against terrorist groups, which have been emboldened by the Taliban’s return.

Pakistan suffered 1,007 terrorist attacks in 2022, principally conducted by Tehrik-i-Taliban Pakistan and Islamic State Khorasan. At a news briefing in December, State Department spokes­person Ned Price noted, “We have partnered with our Pakistani friends to help them take on this challenge. We stand ready to assist, whether with this unfolding situation or more broadly.” Pakistan, he said, remains an important security partner: “We seek a strong partnership with Pakistan on counterterrorism and expect sustained action against all militant and terrorist groups. We look forward to cooperative efforts to eliminate all regional and global terrorist threats.”

Ahead of the State Department’s comments, the head of U.S. Central Command, Gen. Michael “Erik” Kurilla, visited the Torkham-Afghanistan border and commended Pakistan’s successes in the fight against terrorism. During his meeting with Pakistan’s military leadership, Kurilla also discussed strengthening their military-to-military relationship.

Washington is also taking other steps that have popular appeal. The recently passed $1.7 trillion omnibus spending package includes $200 million for promoting gender equality in Pakistan, a twenty-fold increase from 2020.