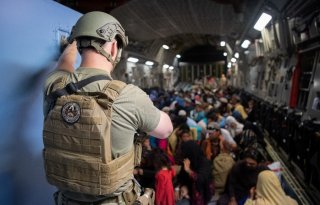 JOE BIDEN launched his presidency with a bold message: America is back. The rank amateurs who had made such a mess of foreign policy under President Donald Trump would be replaced by responsible and experienced “adults” who understood how the world works and how to get things done. Americans and their allies abroad could rest assured that a competent corps—pedigreed experts that an earlier generation had dubbed the best and the brightest—was once again manning the U.S. ship of state. Our adversaries, we were told, would have to reckon with the return of strong American leadership to the global arena. And so on.

Then came Afghanistan. The collision of this catchy political slogan with the hard realities of Helmand province and the Biden administration’s failure to prepare created a humiliating spectacle. Ending the most endless of our unending wars was not as simple as it appeared. The adults who were back in charge of U.S. foreign policy turned out to be not so adept at planning and executing a military withdrawal. As President Biden offered one sophistic explanation after another about why he was leaving, including claiming that he had to adhere to the Trump plan, his advisers’ faith that our partners in the Afghan government and military were willing and able to resist the Taliban turned out to be wholly misplaced. The folly of attempting to build a modern central government in a country that had no tradition of central governance was laid bare for all to see. Afghanistan has held a mirror up to the performance of the U.S. foreign policy establishment, and the reflection has not been pretty.

No doubt the series of unforced errors committed by this elite did not originate with the Biden crew. Quite the contrary: the seeds of our disaster in Afghanistan were planted as far back as the 1990s, when the rising post-Cold War generation, led by a combination of neocons and liberal hawks, first convinced itself that America should discard its reliance on traditional statecraft to manage and contain foreign threats in favor of an ambitious new effort to transform the outside world in the image of the United States. NATO was reconceived from a defensive military alliance into something else—a vehicle for spreading liberal governance and creating a new Europe, “whole and free.” No matter that George F. Kennan, among others, warned that America risked creating a backlash that would result in a resentful and revanchist Russia. During the Clinton administration, Russia became an informal American laboratory for testing theories of imposed transition from communism to market democracy. What’s more, President Bill Clinton enmeshed America and NATO in the Balkans as well. The contention was that the roiling return of national hatreds in the Balkans could be removed through the magic of regime change in Belgrade, which turned out to be a proving ground for Baghdad.

This faith in America’s transformational prowess continued under President George W. Bush in the form of his “Freedom Agenda.” Bush, who had preached a return to humility during his 2000 election campaign, now became an apostle of spreading the American creed in the Middle East. Fighting back against terrorists, it was thought, required more than high-quality intelligence and pinpoint military strikes. Terrorism itself could be defeated, not just contained and minimized, by replacing repressive regimes in the greater Middle East with models of liberal governance that would elevate the region’s standard of living and drain the swamp of extremist thought. The successful counterterrorist operation in Afghanistan morphed into a broad nation-building mission. The Iraq War became an effort to create a modern democratic polity whose success would kick off a virtuous domino effect among Iraq’s neighbors. The few voices who dared to suggest that Washington might be biting off more than it could chew were dismissed as delusional at best and unpatriotic at worst. It was none other than David Frum who wrote a cover story in National Review condemning “unpatriotic conservatives.”

In retrospect, the skeptics’ forecasts of what American hubris would produce have proved all too accurate. The American military was saddled with missions for which it was ill-suited, presenting its leadership with a stark choice between prolonging unwinnable wars and admitting embarrassing failure, which led to years of morale-sapping stalemate. Our diplomatic muscles atrophied as we relied too much on coercing and transforming, and too little on deterring and counterbalancing, to safeguard American interests. Threats to our national security multiplied. America’s clout and standing in the world plummeted. Our self-confidence was left in tatters.

BIDEN, IN defending the Afghan withdrawal, was correct to frame his decision broadly as “ending an era of major military operations to remake other countries.” The American people by and large support this recalibration, if not the manner in which it is being executed. It is not accidental that Barack Obama campaigned in 2008 against the Iraq War, or that Trump prevailed among Republican presidential aspirants in 2016 as the sole candidate opposing our “forever wars.” Recent polling by the Chicago Council on Foreign Affairs showed that 70 percent of Americans favored withdrawing combat forces from Afghanistan. Those data points have certainly not been lost on Biden, who not only pledged as a candidate to pull the plug on Afghanistan but followed through on that promise early in his presidency. It seems that elections do, sooner or later, serve to discourage our political leaders from persisting in strategic errors.

Their impact on our unelected foreign affairs establishment is another matter, however. As was evident in its fierce resistance to Trump’s efforts to wind down our wars in Afghanistan and Syria, as well as in the recent press sniping asserting that Biden could simply have maintained the Afghan war effort ad infinitum at little cost to American lives and pocketbooks, the foreign affairs experts in U.S. agencies, government contractors, and media have grown increasingly disconnected from the realities of both the American heartland and the world. Voters can do little to touch them. But presently there is not much else to hold them accountable for bad analysis, erroneous forecasts, ineffectual policies, and sloppy planning and execution. Reining them in is a formidable challenge.

Traditionally, the press has been an invaluable player in holding government agencies to account. Changes in the media landscape over the past twenty years, however, have produced journalism that is far more partisan and far less accurate, greatly diminishing the media’s ability to perform its informal oversight role. Its handling of the erroneous claim last year that Russia was paying the Taliban bounties for killing American soldiers—a story advanced in obvious partnership with Trump’s numerous opponents in the national security community aimed at tying his hands in Afghanistan and torpedoing his electoral fortunes—was all too emblematic of the media’s chummy relationship with the permanent bureaucracy. Opinion polls show that public confidence in the media has collapsed. When a referee is perceived as colluding with some of the players in the game, willingness to respect his calls disappears.

Congress, with its statutory oversight powers, has an even more potent role on paper. In practice, however, it has done little to hold our permanent bureaucracy accountable for its performance on national security issues. Why is the Senate routinely confirming unrepentant architects of past failures for senior policy positions? Why are Congressional intelligence committees not subjecting the CIA to annual reviews of its key intelligence judgments? Why has investigating government abuses become an exercise in partisan grandstanding? Relying on the bureaucracy to judge its own performance is a formula for grade inflation and groupthink. It produces the meager results epitomized by our shambolic departure from Afghanistan.

AGREEING ON what the United States should not attempt to do in the world is only one part of what is necessary for America to bounce back in reality, not just in rhetoric. Success requires rebuilding at home, restoring faith in our nation’s founding principles and fundamental institutions, and reconstituting a competent cadre of foreign policy experts. The lesson of Afghanistan, like that of Vietnam a half-century ago, is not that we should retreat from the world or abandon the use of military power. Rather, it is that we must align our objectives closely with our capabilities, reserving the resort to war for instances where our nation’s vital interests are truly at stake. This is where Biden could make a real difference.

Reality can be an unforgiving disciplinarian. It compels nations to balance their ambitions against their abilities, to distinguish what is necessary and achievable from what is desirable but unattainable. Reality requires setting priorities, because resources and capabilities are not infinitely elastic. This is a lesson all children must learn if they are to mature into responsible adults. So, too, must governments. The alternative is failure.