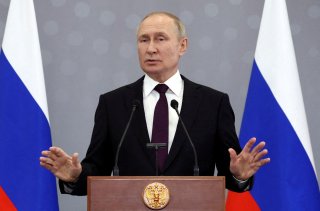 On October 14, the Department of Treasury, Commerce, and State issued a report detailing how American sanctions and export controls have severely limited Russia’s ability to wage its war in Ukraine. Although the measures the United States has taken are far-reaching, Russia has recourse to alternative acquisition channels and subversive networks that undermine Western initiatives.

One of the report’s notable shortcomings is the scarce mention of energy-related retaliation. The United States has vigilantly sanctioned financial institutions, defense companies, and banks, but places comparatively little emphasis on Moscow’s energy sector. “While Russia has benefited from high energy prices and a store of foreign exchange reserves,” the document notes, “the U.S. Government has worked with partners and allies to immobilize about $300 billion worth of assets of the Central Bank of the Russian Federation.”

In other words, as the Kremlin ensures that energy prices remain high and that it is backed by a stable currency, the United States has continued to double down on the Central Bank. The punishment is certainly depleting Russian reserves but does not directly respond to the driving force of the Kremlin’s war machine.

Since March of this year, the United States has done very little to address the immense profits Russia enjoys from its energy sector, beyond restricting imports. In May, reporters revealed that the Biden administration was hatching a plan to cripple Russian oil revenues but that a desire to avoid conflict with major trading partners such as China and India made Washington think twice about imposing sweeping measures. With these two Asian powers taking advantage of discounted Russian Liquified Natural Gas (LNG) prices, the United States is hesitant to impose additional sanctions that would destabilize the market.

Consequently, Russia has been able to buy time to establish energy-based cooperation with its Asian neighbors. “We are talking about partnerships in creating generating capacity, building nuclear power plants, and introducing digital technologies,” Russian president Vladimir Putin said at the October 14 Russia-Central Asia Summit, which brought together the heads of state of Russia, Kazakhstan, Kyrgyzstan, Tajikistan, Turkmenistan, and Uzbekistan.

Four of these states are either members or observers to the Eurasian Economic Union (EAEU), Russia’s putative counterpart to the European Union (EU). The EAEU deals with issues ranging from customs duties to agriculture to economic security. It is often described as a hub-and-spoke model because of Russia’s authoritative role and special privileges within the organization. Since they control 90 percent of the EAEU’s GDP and the overwhelming majority of its energy exports, Russia has the final say on the prices that other member states must pay for natural resources.

For instance, EAEU countries must agree on common values for the development rate of the world economy and crude oil, but the union’s treaty states that the “information provided by the Russian Federation for the purpose of macroeconomic forecasting shall not be deemed as an obligation of the Russian Federation to maintain the specified prices of natural gas supplied to the Member States in the forecast period.”

Western observers have pointed to instances of Russia’s failure to transform the EAEU into a political weapon as proof that Central Asian states are reluctant to participate in Putin’s projects for regional integration. In 2013, for example, Kazakh president Nursultan Nazarbayev criticized the political direction that the Eurasian Customs Union, the EAEU’s three-member predecessor, was taking. He made it expressly clear that the union was formed solely for economic matters. Seven years later, when Belarus came under fire for grounding a plane and arresting journalist Roman Protasevich, Russia pressured EAEU members to challenge Western sanctions. Kazakhstan firmly rejected Moscow’s compulsion.

Thus, Putin has been forced to fall back on strictly economic cooperation, but success on this front may be enough to gradually convince EAEU member states that it is worth deferring to Russia’s opinion on geopolitical matters. During the sixth summit of the Conference on Interaction and Confidence-Building Measures in Asia held two weeks ago in Kazakhstan, Putin attributed “global economic growth” to organizations like the EAEU.

As long as Russia dictates Eurasian energy security, Central Asian states like Kazakhstan will not separate from the Kremlin. This dynamic sets an unhelpful precedent: Russia is pocketing enough revenue to fund pipelines throughout Asia, recreating the system of dependency that trapped Europe.

“The key task is to develop new trans-Eurasian corridors passing through the territories of your countries,” Putin told Central Asian leaders on October 14. He described the pipelines as follows: “East-West, North-South and Europe-Western China.” The final example is particularly striking. There is no pipeline that currently connects these two regions. During the past few months, though, China has been selling the surplus LNG it bought from Russia to Europe. If Moscow wanted to tighten its grip on these exports, there would be no better plan than to encourage the construction of a pipeline that runs through countries friendly to the Kremlin.

It is unlikely that the EU would accept such an offer with China, but to be absolutely certain that Europe cannot branch out to Beijing without passing through territory favorable to Russia, Putin covered his bases on the week of October 10. Putin proposed to Turkish president Recep Tayyip Erdogan that Istanbul become a hub for Russian gas exports to Europe. During the Russia-Central Asia Summit, he discussed the development of energy reserves in the Caspian Sea. Putin also met with the President of Azerbaijan on October 13 and celebrated the progress made relating to energy security. In short, Putin directed all his attention that week to countries and seas that further his gas diplomacy.

A slide deck similar to the alert mentioned above titled “Sanctions and Export Control Eroding Moscow’s War Effort,” compiled by the State and Treasury Departments alongside intelligence officials, appears to focus little on Putin’s profits from natural resources. Where it excels is in pinpointing Moscow’s technological and defense-related failures while cautioning Western allies to look out for signs of Russian infiltration. The slide warns, for example, that Russian intelligence has been “tasked to illicitly acquire Western technology and parts.”

This is a reasonable concern. “The [semiconductor] situation is extraordinary, nothing like this has ever happened to us before,” writes a Russian author in The Bell. “It may be possible to find something in China, but the problem is that China does not produce everything.” Indeed, the United States, which benefits from a stronger relationship with major chip producers like Taiwan, South Korea, and Japan, has demanded that leading manufacturers cut their exports of advanced chips to China. It is Russia’s second-largest chip supplier, accounting for $64.6 million worth of integrated circuits and components. Sanctions from the United States have thus added significant pressure. “Is it possible to buy something through China as an intermediary?” the same Russian writer asks. “It is not given because they [Western countries] don't sell everything to China either: their own sanctions have been imposed against it, even if they are not the same as against Russia.”

The Biden administration’s recent sanctions on the Chinese semiconductor industry have further constricted the United States’ principal adversaries. American executives and engineers previously contributing to semiconductor manufacturing in China had to resign from their jobs overnight. This came with a prohibition on sending chips designed for artificial intelligence development and high-performance computing to Beijing. Washington’s restrictions on Chinese production and imports have Russia worried. “So it is impossible to say that what we bought in Europe and America will now be in China,” the Russian author concludes.

Moscow has already started turning to other authoritarian regimes like North Korea and Iran to make up for its artillery deficits, but these countries are unable to provide much help when it comes to semiconductors. Therefore, U.S. intelligence agencies are prudently cooperating with the departments that manage sanctions to defend against Russian infiltration.

Washington has proactively targeted loopholes in Russian defense, financial, and technological industries to increase the cost of the war in Ukraine, yet it has not applied the same effort to the gas and oil sectors. OPEC+, of which Russia is a member, cut oil production by 2 million barrels a day at the beginning of the month. This production cut will cause the United States and its allies to face rising gas prices that turn public opinion away from sending aid abroad. Putin met with the Emir of Qatar, another OPEC+ member, on October 13 to discuss “good prospects in infrastructure, energy, agriculture and other spheres.”

Russia wants to keep gas flowing into Europe. “We are ready to supply and deliver [our] entire volume… But if someone doesn't want to take our product, what does that have to do with us? This is your decision,” Putin said during the plenary session of the Russian Energy Week International Forum earlier this month. What he does not understand is that the EU wants to free itself from depending on LNG from an unpredictable country that flouts democratic norms.

Putin is advocating for the construction of pipelines through Central Asia, including one that runs from Europe to Western China, while throwing his weight behind the EAEU. He is simultaneously pushing for energy cooperation with Turkey, Azerbaijan, and Qatar to extend Russian influence over countries that could supply gas to Europe or through which a new pipeline could run. The United States has been hesitant to escalate energy sanctions, fearing the effect this would have on China and India, but doing so targets the roots of the Russian reserves that have sustained the war up to this point.