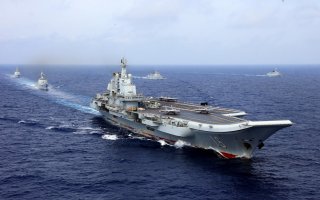 There are two levels of strategic competition between the United States and China: within the Indo-Pacific region and globally. At both levels, it is a contest for relative power, influence, and wealth; but it takes on a more physical, geographic quality in Asia, where the military aspect of the competition is more immediate. This is the focus of The Strategy of Denial: American Defense in an Age of Great Power Conflict, a new book by Elbridge Colby, who served as deputy assistant secretary of defense for strategy and force development during the Trump administration. Colby builds the argument that “military affairs are in important respects determinative” of overall grand strategy; that the Indo-Pacific is now the most important arena for American strategy; and that the future status of Taiwan is ultimately the linchpin of US defense strategy in the region. Accordingly, The Strategy of Denial is primarily about how and why the United States should forge an “anti-hegemonic” coalition to prevent Taiwan from falling under mainland Chinese control.

The book is a tour de force of erudition, mathematical logic, and crisp writing. I will defer to military experts to assess its extensive discussion of defense and military strategies. But some of Colby’s judgments on the Taiwan issue are surely subject to debate, including his view that a “Chinese campaign to seize Taiwan, however important the island is to Beijing, would not actually rise to the existential level” for the Chinese Communist Party. In addition, Colby appears to firmly support what has been deemed “strategic clarity”—a firm U.S. commitment to Taiwan’s defense—even though he observes in another context that “even decision-makers within a state cannot know with certainty what decisions they will make in the future.”

My primary focus is on the fundamental premises and assumptions underlying Colby’s strategy. He reaffirms the perennial U.S. “core objective of denying any other state hegemony over one of the world’s key regions in order to preserve Americans’ security, freedom, and prosperity.” Given the key strategic importance of Asia and China, he asserts that “ensuring that China does not establish hegemony over Asia must be the United States’ cardinal strategic aim.” This raises two core questions: what would Chinese “hegemony over Asia” look like, and would it necessarily be a threat to American security, freedom, and prosperity?

Although Colby acknowledges that “scholarly definitions vary,” he defines “hegemony” (which he uses interchangeably with “predominance”) as when “a state exercises authority over other states and extracts benefits from them, but without the responsibilities or risks of direct control.” He explains separately that a hegemon “threatens to compromise or eliminate states’ self-determination” and to persuade them to “give up core goods such as autonomy.” He contrasts this with U.S. hegemony (he acknowledges it as such) over North and Central America, which “is compatible with and indeed beneficial for many other countries’ interests.” But what Colby overlooks—or rules out—is the possibility of a version of Chinese predominance that is similarly compatible with or even beneficial to other countries, and does not eliminate their self-determination or autonomy. Instead, he presumes that Chinese predominance in the region would inevitably and invariably be coercive and domineering with the neighbors, and both hostile to and exclusive of U.S. interests in Asia. But neither of these is a given.

Colby makes three basic arguments to refute skeptics and bolster his presumptions about the nature of Chinese hegemony. First, he states that China, as regional hegemon, could “use its power to disfavor and exclude the United States from reasonably free trade and access” to Asia “in ways that would undermine America’s core purposes, shift the balance of power against the US, and ultimately open the country to direct coercion in ways that would compromise Americans’ freedom, prosperity, and even physical security.” There can be no doubt that Beijing seeks to shift the balance of power in the region against the United States, but there is little reason to believe that it seeks to exclude the United States from Asia economically, given China’s own reliance on U.S. trade. Moreover, the notion that Beijing is looking for opportunities to subject America to direct coercion or to undermine its freedom and prosperity reflects grossly inflated threat perceptions. Beijing is simply not interested in an existential struggle with the United States, which it recognizes would be counterproductive to China’s interests, and probably futile.

Second, Colby acknowledges that it “may very well be true ... that Beijing does not want to create a territorial empire in Asia,” but this “misses the point from a military planning point of view.” China’s hegemonic ambitions would require it to thwart or overcome the “anti-hegemonic coalition,” so Beijing “will want to be able to conquer substantial parts of Asia.” This may be true, but it equates Beijing’s pursuit of a capability with an intention to use it aggressively and toward expansionist goals. It also presumes a coercive, hostile, and exclusive version of Chinese regional hegemony, dismissing the possibility that Beijing will calibrate its approach in an effort to avoid conflict and escalation, and in pursuit of peaceful coexistence.

Third, Colby judges that China simply cannot be trusted or given the benefit of any doubt. He entertains the possibility that Beijing will not pursue “full-fledged hegemony,” or that Chinese predominance in Asia might not be that bad. “Yet to each of these arguments there is a compelling counterargument,” he replies. And although China, once established as regional hegemon, “might pursue a more open-handed approach toward the United States, it also might very well not,” per Colby. Here, Colby invokes the oft-cited 1907 memorandum by British diplomat Eyre Crowe that examined Germany’s pursuit of regional hegemony and has been credited with predicting World War I. “A state may want regional hegemony but conceal its aspirations behind lies, deceit, and distractions, as the Crowe Memorandum famously pointed out in the context of imperial Germany,” Colby observes.

But Colby makes the same mistake that Crowe did when he judges that Washington cannot afford to take the risk of accepting China’s ambitions as limited or its intentions as peaceful. Crowe argued that it should make no difference in Germany’s case because England needed to prepare for the possibility of German duplicity or a later expansion of German ambitions. Similarly, Colby advocates a military strategy to prevent Chinese hegemony regardless of Beijing’s intentions or the nature of that hegemony. He observes that Beijing “has the most powerful incentive to hide the extent of its ambitions”—but this is not necessarily true if China’s ambitions are less than Colby thinks they are. More importantly, he replicates the mistake Crowe made in failing to recognize or acknowledge that England’s behavior would be a variable in shaping Germany’s subsequent behavior. Colby similarly bypasses the probability that his proposed U.S. strategy will fuel a security dilemma and prompt Beijing to harden its own strategy and resolve.

Colby makes several valid assumptions about the importance of other countries to his strategy since they would make up its “anti-hegemonic coalition.” He is correct that Beijing will attempt to prevent or break up such a coalition through what he calls a “focused and sequential strategy” of using coercion and/or enticement to draw its members away from the United States. Additionally, he is correct that Washington cannot be sanguine about this. After all, some U.S. allies and partners may not fully agree with Washington on the nature or extent of the threat Chinese predominance would pose to their own freedom, prosperity, and security. They also may have doubts about the United States’ readiness and capability to protect them or prevail over China in an actual conflict. But although Colby outlines many ways to address these challenges, he does not sufficiently confront the potential implications of other countries not fully embracing his denial strategy or its premises.

Many of Colby’s core assumptions and judgments appear to overlook the underlying symmetry between the approaches that the United States and China have taken to Asia. “The United States has no inherent interest in harming China, or in imposing its own hegemony over the region,” he says. “U.S. goals are limited to preventing Beijing from achieving regional hegemony.” But neither does China have an inherent interest in harming the United States. And why should the United States expect Beijing to accept Washington’s characterization of its regional ambitions more than Washington is willing to accept Beijing’s? Chinese leaders have as much reason as their American counterparts to follow Crowe’s advice of not trusting the other side’s intentions.

Colby argues that “China is the power seeking to use military force to change things,” partly because some states are “fearful, jealous, ambitious, or domineering enough that they are prepared to fight to get their way.” Washington, on the other hand, seeks a “decent peace” by way of “reckoning with the unpeaceful.” But it is premature at best to judge that China is inherently unpeaceful, or eager to “use military force to change things.” Moreover, the United States is widely perceived as prepared and even inclined to fight to get its way. Indeed, Colby’s book aims at providing a strategy for doing so.