Talk to Russia Before It Is Too Late 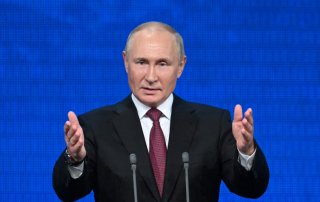 To the end, Samuel Beckett insisted that he did not know who Godot was, nor what his two characters, Vladimir and Estragon, were waiting for. That was not the least absurdity of his play, Waiting for Godot, which, as the Irish author later explained, he wrote in French because he did not know the language well.

That is where we are now: confused and unclear over what we do or expect as we stagger into the second and arguably final half of Joe Biden’s presidency. At home, U.S. democracy is at risk, and abroad, a tragic war waged in a moment of global mutation told in languages we understand poorly even when they carry an American accent.

Who knows what will come next? This is a lose-lose war that neither side can win but which both refuse to end. “We have not started anything yet,” Russian president Vladimir Putin warned a couple of months ago. As a criminal reminder that despite mounting evidence of failure, Russia still owns the war he started since he controls its escalation beyond anything Ukraine can conceivably bear and the West dares to contemplate. “We have lost nothing and will lose nothing,” he asserted this month as a defiant Ukraine rolled his army back. What if, under pressure from his critics at home, he means what he says? For those who dismiss his nuclear hints, these are no echoes of the Cuban missile bluff. A defiant Putin is no Nikita Khrushchev and what is known of him suggests that he might choose the worst of the bad options available despite Biden’s warnings meant to deter him.

Is it time, then, to think about the path we’re all on and apply the brakes before it is too late? Recall the Sarajevo moment, over 100 years ago, when so much could have been avoided had some thought about the cataclysm ahead. Or, closer to us, remember the Korean War after the breakthrough in Inchon, the Vietnam War after the removal of Ngo Dinh Diem, or the Iraq War after Saddam Hussein’s capture? All spurned opportunities to end a war before it exacted nearly unbearable costs.

For those who fear appeasement, a willingness to talk is not a repeat of prewar Munich or postwar Yalta. Ukraine is neither Austria in 1938, when the German aggressor remained militarily weak nor Poland in 1945 when the war was already won. For those who wait for a Korea—like status quo ante bellum, this is not a war with mutually accepted red lines that give its protagonists the time they need to achieve an alleged position of strength before agreeing to serious negotiations. For those who dream of unconditional withdrawal from, or regime change in, Russia, this is not the war in Afghanistan, waged by the aged leader of a worn—out Soviet state. This is a moment of its own, an existential world crisis the likes of which has not been seen since 1945. And make no mistake: the war in Ukraine is only beginning and no one can tell how it will affect the balance of the decade.

One day “there will be a dangerous backlash,” former French president Jacques Chirac said of NATO enlargement (which he embraced nonetheless). As the most likely source of this backlash, Ukraine—although prudently kept at a distance—always tested Russia’s choice to either cooperate with or maneuver against the United States. Moving into a new century, Putin made his choice known—to reload and go backward in the direction of Cold War belligerence, with NATO enlargement as an alibi, rollback as a strategy, and Russian history as his motivation. In late 2021, Biden’s early warnings about a full-scale Russian assault on Kyiv did not deter Putin who was clearly dismissive of the West’s will to respond. They were also ignored by the Ukrainian government, which was skeptical of Putin’s preparedness for such a strategic gamble, and rejected by most European allies who were mindful of Washington’s recent intelligence debacle in Afghanistan.

It is still too early to forecast the long-term consequences of the war. However, an early assessment can be made of Europe’s repositioning toward the United States, how the United States compares to Asia, the development of the Sino-Russian relationship, and the rise of the Global Rest relative to the West.

In the West, there is much celebration: Russia down (and out?), America in (and back?), Europe up (and resolute?), and China aside (and troubled?). NATO has been enlarged and its identity and preponderance have been restored across Europe. America’s leadership has been reset with a figure of authority and resolve that the rest of the West welcomes. The European Union’s (EU) complementary relevance has been asserted and even earned applause from perennial Euroskeptics.

Can it last? As Europe goes through its most demanding winter in seventy-five years, expect troubling questions about the conditions that led to this point. Did the United States deter Russian aggression? No. In anticipation of the war, did the United States respond to Ukraine’s urgent arms requests? No. Having failed to deter and defend, did it join the fight? No. Having left the fighting to others, did it suffer like them? No. Having engineered a strategy that has kept the war going, was enough done to win, stop, or end it? No.

In short, will the end goal of defanging Putin and weakening Russia justify the means? To speak up for and arm Kyiv is one thing but to die for and suffer for it is another. That is the untold reminder of the war. For allies in Europe and elsewhere to believe that any American president will risk a nuclear war on their behalf in every circumstance is a risky gamble. While applauding the West’s unity and resolve, think of the Cuban missile crisis sixty years ago, which opened a decade of West-West obfuscation, intra-European confusion, and East-West recalibration until Ronald Reagan later restored enough strategic clarity to win it all.

The war in Ukraine was met with an unprecedented level of consultation in NATO and with the EU, and the Biden-Blinken foreign policy team deserves high marks for its management of the alliance. Yet, the war has also exposed Europe’s vulnerability and America’s mendacity to wage a self-serving proxy war whose costs are borne mainly by others. Over 6 million refugees, dramatically higher gas prices, energy shortages with serious political consequences, more turbulence in strategically vital near abroad countries across the Mediterranean, and, worst of all, the return of war on the continent. Next, prepare for some European “jaw-jaw” not only with Putin but also with Biden of the sort the French like to lead, now with a forceful assist from a bolder post—Angela Merkel’s Germany and a newly elected neo-fascist government in Italy. Yes, NATO is back but where is the alliance going?

Calling Putin names while awaiting his unconditional surrender of every square inch of Ukraine, including Crimea, is not a winning strategy. Expecting him to leave Ukraine empty-handed and humiliated is deceptive. As Henry Kissinger wrote in his most recent book, the test of statesmanship “is to temper vision with wariness, entertaining a sense of limits,” which includes an understanding of achievable war aims. A sense of justice certainly satisfies our anger and outrage but it also closes the door on diplomacy.

Russia certainly stands as the main loser of the war, irrespective of what comes next, but the need to reengage Moscow to stop the fighting is no less certain. Think President John F. Kennedy after the 1962 Cuban Missile Crisis and, although different in character and significance; President George H.W. Bush after the 1989 Tiananmen massacre. Both presidents sought a path to détente with the Soviet Union after its most dangerous provocation and recovering from the then-greatest blow to normalization with China within the following six months.

What will become of Putin himself is becoming clearer despite approval rates that remain surprisingly high. Remember, Khrushchev’s demise after his Caribbean fiasco occurred nearly two years to the day later. It is only a matter of time before Putin runs out of time too. Yet, would his removal make a difference? Leonid ​​Brezhnev’s ascension to power led to another two decades of global confrontation. Now, Putin’s critics are demanding more war, not less, and fewer red lines, not more. With no credible political bench in Moscow, will there be someone worse after Putin?

Admittedly, the thought of engaging Russia after “the obscene wrongness of [its] invasion” (dixit George Packer) ended its moral legitimacy, degraded its economy, and wasted its military power is morally disturbing. Why not finish what Putin started, and with him Russia? But beware, Putin is the way he is because Russia is the way it is. Open-ended punitive sanctions would divert public resentment from him to the West and set the stage for another round of confrontation. A new clash could be more dangerous than the Cold War because of China’s full-time involvement and its own baggage of historical grievances and ambitions.