Settlement in Ukraine Is Not Appeasement 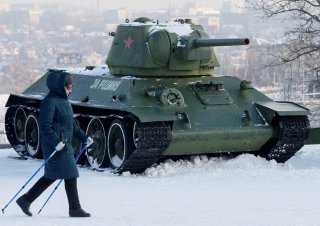 The death, destruction, and displacement resulting from Russia’s ongoing invasion of Ukraine are gruesome enough to evoke a question that deserves to be asked: Could this have been avoided?

The navel-gazing, second-guessing, and blame peddling of recent weeks have centered on the late 1990s expansion of NATO to include former Warsaw Pact states, and the alliance’s 2008 Bucharest “open door” declaration acknowledging Georgia and Ukraine’s aspirations to join it in the future. Vladimir Putin’s response? By late summer 2008, Russia had occupied disputed territories with Georgia, and in 2014 it infiltrated and seized Crimea from Ukraine. Now he has taken Ukraine’s ethnic Russian-populated Donbas region and a land bridge to Crimea along the Black Sea.

According to both international law and Western preference, these territories remain(ed) sovereign Ukrainian soil. But for Putin, what cannot be justified on legal grounds can on ethno-nationalist ones. Even a cursory familiarity with Ukraine reveals that Crimea and Donbas have long been Russian populated, are strategically and symbolically important to Russia, and were the subject of hot debate in Moscow at the time of the Soviet collapse. From the Kremlin’s view, these geographies have not been settled, neither in Russia’s favor nor otherwise.

The slaughter in Ukraine continues, and Russian forces outmaneuvered around Ukraine are doubling back towards their safe haven of Donbas. Though Russia’s military strategy has been exposed as over-confident and incompetent, Putin’s tsarist kingdom is not about to fall. This year, Russia is projected to earn $320 billion in oil revenues (one-third more than in 2021), and its current account surplus will rise to $240 billion. Even on the back foot, he can continue to fund his war machine. The question is not whether he can eventually be stopped, but what he would settle for in order to hasten an end to his genocidal campaign. To get straight to the point, the answer lies in a clear legal partition of territory (gains for Russia) countered with NATO membership for Ukraine.

Putin has frequently spoken about his desire to unite the ethnic Russian “near abroad” under one flag. Ukraine’s own internal cleavages, stoked partially by Russia itself, enabled such irredentism. Prior to Zelenskyy, two decades of Kiev politics had been a spin cycle of Western versus Russian-leaning leaders. Zelenskyy’s very efforts to bridge those divides and achieve a more culturally reconciled Ukraine perversely provoked Putin to intervene in order to cement the Minsk agreement’s devolutionary character.

But knowing what we do about Putin’s disturbed psyche, isolated behavior, and delusions of grandeur—and the reality of his political and biological longevity—what diplomatic accommodation could have been sufficient to avert this worst of all possible outcomes?

The answer lies in settling borders before tanks cross them. In the case of Ukraine, the 2014 capture of Crimea should have disabused the West of any notion that Putin would either return the peninsula or engage fairly in a peace process over Donbas, where he has relentlessly supported pro-Russian separatist militias. Rather than the past eight years of inevitably futile diplomacy followed by the current campaign of destruction, Crimea and Donbas could have been formally ceded to Russia at the time—and Ukraine promptly admitted into the EU and NATO in response. Give—and take.

Real statesmanship would have been to absorb losses in the name of stability while showing strength by assimilating the victim and standing up to the aggressor. In retrospect, it certainly would have been the more humanitarian solution as well.

Herein lies the difference between settlement and what might surely be misconstrued as appeasement. An appeasement strategy would entail concessions alone, whereas settlement can take the form of confident confrontation. Telling Russia in 2014 that its seizure of Crimea justifies Ukraine’s NATO membership and armament would be a fitting response and a deterrent to future meddling. Whether or not Putin explicitly wanted a new Iron Curtain, he would have gotten one—and thus more likely contented himself to his marginally expanded domain.

Holding out hope for some vague Ukrainian “neutrality” is not the answer precisely because it remains subject to interpretation and misperception. Ukraine was already officially neutral until Russia’s previous invasion that captured Crimea in 2014. A country is either sovereign or it is not. Calls for “neutrality” are not conflict resolution but a recipe for further subterfuge. Ukraine deserves better, even at the cost of some territory.

There has been much speculation as to what lessons China may draw from observing Russia’s Ukraine misadventure for its strategies vis-à-vis Taiwan. But China’s island seizures in the South China Sea have already resulted in significant backlash. The United States, Japan, India, and Australia have formed the “Quad” alliance of Indo-Pacific democracies, conduct regular freedom of navigation operations in water surrounding atolls China has fortified, and have ramped up defense exports to the navies of littoral countries such as the Philippines, Indonesia, and Vietnam. European leaders have also promulgated “Indo-Pacific” strategies and sent warships into the South China Sea.

But this too is not enough, since the status of these various island formations in the Spratly and Paracel Island chains remain very much disputed. And unlike Russia, China’s military capacity is growing by giant leaps. All the more reason then, to settle with China now rather than risk misperception and escalation later. Those islands that China has built up into its own de facto possessions should be recognized as belonging to China—but allied countries should take similar actions to reinforce and defend every rocky outcrop they still possess—with bluntly transparent Western support. China should be told in the sharpest terms that military assistance will mount across the South and East China Seas until it engages in reciprocal and binding recognition. Again: settlement with deterrence.

We should also think through the second-order consequences of preemptive border settlement that favor Western goals. Territory may be sacrificed, but good fences make good neighbors. Clarity over borders enables their opening to flows of talent, a competition in which the West prevails hands-down over both Russia and China. Just look at the outflow of Russian and Chinese students and professionals over the past generation, including those fleeing Moscow and Hong Kong today. A generation of talent gained is worth more than a sliver of territory lost.

We often turn to ancient Athens for classical insights into how pride and fear make conflict inevitable, but we should instead learn from the practical wisdom exhibited in the practice of dike by which Romans settled border disputes on the basis of local geographical features and conditions to avoid unnecessary violence. A world still replete with outstanding border disputes needs precisely this blend of firmness and fluidity.

Recent decades have laid bare how great powers can be eager to enter wars but are rarely good at preventing them. That is a dangerous paradox given how many so-called “frozen conflicts” are flaring just below the surface and away from the headlines. From the Balkans to the Caucasus to the Himalayas, unsettled conflicts are perpetual powder kegs.

The deep and actionable lesson we take away from Ukraine must, therefore, be to settle disputes before they become great power wars and humanitarian catastrophes. Fortunately, even conflicts we think of as ideological in nature have territorial solutions. A world of settled borders is a more peaceful world even if it is still populated by authoritarian despots.

Dr. Parag Khanna, a former senior advisor to U.S. Special Operations Forces and the National Intelligence Council, is the author of The Second World, Connectography, The Future is Asian, and MOVE.