Thanks to China, Hong Kong Will Never Be the Same 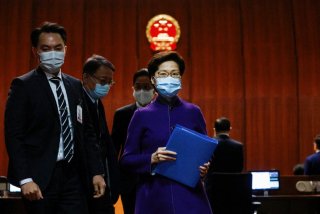 When the 1997 handover of Hong Kong took place—as the city ended 150 years as a British colony and became a permanent part of mainland China—its future governance seemed clear. Beijing would handle defense and foreign affairs, but “Hong Kong people” would manage their own affairs with “a high degree of autonomy” for at least fifty more years.

Then reality set in. Ever since the handover, Beijing and the ruling Chinese Communist Party (CCP) have steadily reneged on explicit and implicit promises about how China would govern Hong Kong and what civil rights its people would enjoy. Aided most recently by Chief Executive Carrie Lam’s seemingly enthusiastic enablers, central authorities have tightened controls sharply until achieving the current status quo. As a result, China has crushed political dissent, eroded the inherited common law legal system, and squelched other civil rights.

The Chinese takeover brought out-of-control and sometimes violent demonstrations by mostly youthful protesters, whose many grievances included worries about career prospects, housing costs, and some of the world’s worst economic inequality. (These basic problems have been unresolved for decades.) An intolerant Beijing reacted by declaring Hong Kong’s local law and order problem to be undermining the whole nation’s security, not just a single city. So, Beijing imposed drastic new laws that ended any hopes that a “high degree” of autonomy might last till the 2047 target or even longer. And it redefined the term “Hong Kong people” to include only “patriots,” limiting office to those politically approved by the powers that be.

The result is what Beijing calls “democracy with Hong Kong characteristics.” But for Michael C. Davis, a legal scholar who spent years teaching law at Hong Kong University, it was a plan—harsh but successful—to “bring the former British colony to heel at last… designed to destroy hopes for liberty and self-government.”

Under the leadership of president and party leader Xi Jinping, who has little patience for political dissent, the long-term goal is to eradicate Hong Kong’s inherited sense of being both a piece of and separate from the mainland—an area with legal rights and responsibilities different from (for most people better than) those found elsewhere in China. In brief, Hong Kong has sought to remain a city of 7.5 million residents that retained the better bits of its long colonial legacy.

Now comes Beijing’s next phase, that of subsuming Hong Kong physically and politically into the rest of China. Over the long term, it will be an integral part of what it calls the Greater Bay Area, the economic conglomeration of Hong Kong, nearby Macao, and nine mainland cities near the mouth of the Pearl River. Together, its population exceeds 80 million and already has a combined GDP that, if it were a nation, would make it the world’s twelfth largest. Beijing wants the area to become an even greater economic and exporting powerhouse.

However, the first melding will happen just next door along Hong Kong’s northern border, delayed for now by Covid restrictions but seemingly unavoidable no matter what its people might prefer. These days that boundary is mostly closed due to the pandemic, but across it lies Shenzhen, a high-tech city of 18 million people that barely existed forty years ago. When health issues permit, much of Hong Kong’s northern space will, in effect, become a southern Shenzhen suburb, with people and goods traversing the border as if it didn’t exist.

And Hong Kong’s politically pliable elite welcomes the change. Consider what Regina Ip, a member of the city’s revised and tamed legislature and a onetime aspirant for its Chief Executive post, said, “…the border between Hong Kong and Shenzhen is an artificial one… the northern part of Hong Kong and Shenzhen are part of an organic whole.” Combining them will “produce a new, even more vibrant economic zone.”

To make this come true, Hong Kong and China plan to build what officials call a new Northern Metropolis near the border and closely connected to Shenzhen. They will construct homes for 2.5 million people who work on either side of whatever is left of a boundary—and apparently, that won’t be much. They will add several new crossing points, and several new local rail lines will carry commuters back and forth, moving Hong Kong’s business center further north. As Lam explained, the goal is to speed “development and connection with Shenzhen and the Greater Bay Area.”

Administrators have yet to organize financing for this project, and its eventual shape may be revised; completion will take many years. But the basic objectives are clear: to inject Hong Kong more directly into the national economy while eroding its sense of being politically distinct. Much of that is basic economic sense; Hong Kong’s future must involve the rest of China. Yet the underlying political motive is to eradicate any lingering sense of true separatism.

Even so, Hong Kong’s financial center will stay in business as long as it serves Beijing’s interests. Mainland companies rely on its banks and stock exchange to raise cash by selling shares and floating bonds, and its wealthy citizens find it useful for funneling personal funds overseas—sometimes for multimillion-dollar homes in southern California or elsewhere. Hong Kong still has a convertible currency linked to the U.S. dollar, and its commercial law courts remain more predictable than those of the mainland despite being weakened by party mandates.

For how long, however, is an open question. Some foreign financiers fear Hong Kong is losing one of its principal advantages, that legal legacy based on British common law. As CCP priorities take precedence, they worry that contracts could lose their sanctity whenever mainland interests are involved. There are also concerns about data security and the free flow of information. Given the sweeping and imprecise nature of the new security laws, there are even worries that bankers could be arrested on trumped-up charges if they dispute official policies. The city will retain an important financial role for China—unless Beijing manages to shift its money-center back to Shanghai someday—but it is losing appeal as the global financial center it professes to be. Fear of possible arrest plus pandemic restrictions are causing many overseas executives, including Americans, to make departure plans.

For all that, Beijing for its own reasons has not totally abandoned the “one country, two systems” political structure it introduced back in 1997. Hong Kong still has a Legislative Council (Legco), now expanded to ninety members. But seventy of them are essentially appointed by the CCP with the other twenty voted in from a shortlist of party-vetted candidates who have officially been termed “patriots.” This pro forma Legco’s basic role is to endorse executive branch decisions, not dispute them. Pro-democracy members have been purged—some arrested—and none can run again.

Lau Siu-kai, once a respected university professor and now vice president of a pro-Beijing think tank that is opposed to political diversity, has explained the changes this way: “…Beijing and [the local government] have worked together to oust the ‘anti-communist,’ ‘anti-China’ and other subversive elements from the Hong Kong society, particularly from the media, education and the civil society.”

Many citizens aren’t happy about this. Some 90,000 emigrated last year, and many more thousands will depart before long. The Hong Kong that attracted so many people from around the world and which most of its citizens favored, is gone forever. It won’t return.