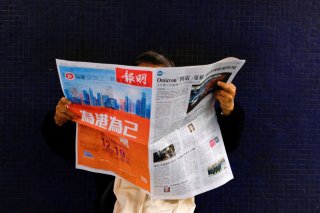 Carrie Lam, the Chief Executive of Hong Kong, denied that press freedom was “extinct” in Hong Kong days after a prominent opposition newspaper was raided by the territory’s security forces.

The raid on Hong Kong’s pro-democracy Stand News online newspaper, which resulted in the arrest of the paper’s editor-in-chief and several of its senior staff members, was the second high-profile newspaper raid of 2021. Six months earlier, Apple Daily, Hong Kong’s largest pro-democracy newspaper, was closed after a similar police raid; its editor, media magnate, and activist Jimmy Lai was later charged with sedition for his role in its publication.

The two raids led a third outlet, Citizen News, to announce its closure on Sunday, arguing that the media environment in Hong Kong was “deteriorating” following the passage of a controversial national security law allowing the territory’s police greater authority in confronting dissenting voices. That law, which criminalizes advocating “secession” from Beijing and “foreign collusion to intervene in the city’s affairs,” has been used to prosecute more than one hundred pro-democracy activists, including Lai.

In 1997, following Hong Kong’s handover from British to Chinese rule, Chinese leader Jiang Zemin promised that press freedom would be protected in the territory for at least fifty years, as part of Beijing’s commitment to the “One Country, Two Systems” principle. Both Beijing and Hong Kong’s Beijing-allied regional government have denied that the national security law infringes on press freedom, arguing instead that the law helped to restore order after unrest accompanying the massive protest wave of 2019.

Although Citizen News is the third major pro-democracy newspaper to shut down in the span of a year, Lam denied that a pattern had emerged.

“This morning I read news about, because of the closure of online medium, press freedom in Hong Kong faces extinction [...] I just cannot accept that sort of allegations,” Lam told a press conference on Tuesday. The day before her comments, she had sworn in the newest lawmakers to Hong Kong’s Legislative Council—each of whom had won their seats in the country’s first “patriots only” election.

Lai has been in prison since December 2020. He was charged with, and ultimately convicted of, helping to lead a prohibited anti-Beijing demonstration commemorating the Tiananmen Square massacre in June 1989, which the city’s leadership argued violated COVID-19 quarantine rules.

The former media tycoon has also been charged with sedition under a separate colonial-era law, as have several staff members at Stand News.