Time Is Running Out to Prepare for War in the Pacific 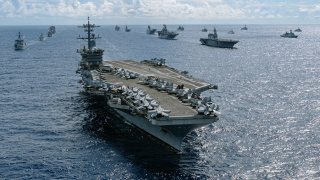 Speaker of the House Nancy Pelosi landed in Taiwan in defiance of vitriol and threats from the Chinese leadership. We are no longer in “warning time.” We are in “preparation time.” Hopefully, the world will recognize that in time.

The concept of warning time can be very useful, but it has its hazards. Great Britain, in the wake of massive losses in the Great War, adopted a planning rule that the armed forces should follow a ten-year rule and not plan on fighting a war during that time. This would save resources, as high readiness is expensive. It would also allow for measured and prudent equipment development. The rule was examined every year and renewed. The Treasury was happy, the Ministry of Defence less so. The Axis powers, as we know, had a different timeline.

As was demonstrated in the late 1930s and validated in 1940, the hazard lies in not realizing that warning time has expired and preparation time has begun. America had its own struggle with recognizing that warning time expired. A peacetime draft was not initiated until 1940. Industry was not prepared, as shown by film of trainees working with wooden replicas of weapons. Moreover, mental readiness was lacking. Gen. George C. Marshall, U.S. Army Chief of Staff, had to relieve very senior officers still enamored of mounted cavalry over armor, even after the fall of France.

One example of a state that got preparation time right is Australia, which correctly discerned the winds of war well in advance of the outbreak of World War II in the Pacific. In 2021, the Honourable Kim Beazley AC, governor of Western Australia and former ambassador to the United States, delivered a compelling John Curtin Prime Ministerial Lecture detailing Australia’s preparation for war, driven by then-Prime Minister John Curtin.

Our warning time in the western Pacific has expired. From 1945 on, the United States enjoyed unchallenged air and sea supremacy, going where it wanted to and projecting power ashore at will, as demonstrated in the Korean and Vietnam Wars. America’s lines of communication across the Pacific—its logistics pipeline, in other words—were similarly unchallenged. We deployed carrier battle groups without challenge to the vicinity of the Taiwan Straits in response to the crises of the mid-1990s.

China’s military buildup that started under Deng Xiaoping in the 1980s accelerated in the 1990s, perhaps in response to Washington’s successful deployments. China took full advantage of civil-military fusion to ensure national and industrial support to modernize and expand its forces exceptionally quickly. Advancements in technology, specifically the emergence of pervasive surveillance and weapons accurate at distance, enabled China’s pursuit of sea control from the land. A complementary enormous naval building program, including forces suited for global power projection, added to China’s power projection and ability to contest American sea control. Beijing’s massive dredging operation in the South China Sea from December 2013 to October 2015 was a masterful demonstration of de facto sea control. China created nearly 3,000 acres on top of coral reefs despite the likelihood of great environmental damage. These manufactured features are now thoroughly militarized with long runways and deep-water ports, despite promises to the contrary. One such feature is bigger than Pearl Harbor; another is larger than the area inside the D.C. beltway. U.S. and global reactions were muted—at best. The Philippines was a lone exception, but it was quickly ignored by China. American sea and air superiority is now challenged, with dire effects on deterrence.

What to do now? Like anything else, preparation time can be squandered. Action is urgently needed. Guidance and assumptions must be developed and promulgated. As a start, we must jettison our explicit and implicit assumptions of a short, sharp, two-medal, one-promotion war. We get it wrong every time. Dr. Hal Brands of the American Enterprise Institute provides a powerful argument against these tendencies. His points, summarized:

The United States may be planning for the wrong sort of war with China. A Sino-American conflict is likely to be long rather than short; it is likely to sprawl geographically rather than remain confined to the Taiwan Strait.

Most modern great power clashes have been long wars, lasting months or years rather than days or weeks. And as great power wars go long, they frequently get bigger, messier, and harder to untangle.

A Sino-American war would feature far more risk of conventional and nuclear escalation than many observers recognize.

A protracted war in the western Pacific would present the United States with severe challenges—and some unexpected opportunities. American officials must begin to think through six key issues: endurance, resilience, coercion, termination, exploitation, and continuation.

Note that Brands rejects another of our implicit assumptions: that of each potential conflict in Asia being contained in its own area. A Korean conflict would remain confined to the Korean Peninsula, in other words. On the contrary, a conflict that begins anywhere in East Asia is likely to spread everywhere.

Next, start at the beginning, not actions on the tactical edge where we all love to play field marshal, air marshal, and fleet admiral. We must look at the armed forces in a different way than the usual breakdown of Army, Navy, Air Force, Marines, Space Force, Coast Guard, etc. Long before we get to the tactical arena, where the shooting occurs, we must examine production, where our forces are built, recruited, staffed, and trained. Does the United States have the capability to ramp up the production of ships, airplanes, and weapons? Early indications are that the United States cannot replace the Stinger and Javelin missiles and tube and rocket artillery systems that went to Ukraine in any relevant time. Do we have the trained technicians to go to three shifts at the factories? Can we still recruit enough young men and women for military service? According to the highly regarded non-profit organization Mission Readiness, “in the United States, 71 percent of young people between the ages of 17 and 24 do not qualify for military service, and obesity disqualifies 31 percent of youth from serving if they so choose.” A wicked combination of new laws and data mining technologies also helps make recruiting even more difficult.

Next is logistics, or getting forces and their material support from the United States to the combat theater. Fuel, oil, water, spare parts, equipment assemblies, and food are irreducible requirements. One only needs to look at the early days of World War II, when American forces in the western Pacific were routed because the plans to quickly provide reinforcements failed. War Plan Orange failed to appreciate the effect of advances in technology, specifically the armed airplane.

Where are the intermediate staging bases? Where do damaged ships and aircraft get repaired near the contact area? Where does the military place fuel and ammunition reserves? How assured are we of access in many areas where China’s Belt and Road Initiative is working to change loyalties?

The operational arena is where ready forces move to the sound of the guns. Forces performing operational maneuver must be protected from attack. For one illustrative example, amphibious transports carrying forces to the fight are at their most vulnerable while moving to the objective area.

Much work lies ahead. America’s strength lies in its allies, so they must be brought on board in active pursuit of preparation. In the 1950s, when the United States and its allies previously faced massive geopolitical and technological change, President Eisenhower initiated the Solarium Project, pulling in experts in a bipartisan manner from across government and society to develop a needed strategy. This historical example may be expandable to incorporate Australia, which is already a partner in technology development through the AUKUS agreement. Japan hosts most U.S. forces in the region and is moving to active collective defense. India, the fourth member of the Quad, has much to contribute. Energizing and operationalizing the Quad would by itself serve as a deterrent as it works to build greater deterrence.

The clock is ticking.