Is Trump Heading Toward War with Iran? 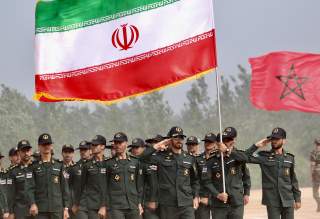 The last two Republican administrations plunged America into wars in the Middle East. The first effort, the Gulf War, was a controversial but tactical victory. The second effort damaged American national security. Although President Donald Trump has explicitly rejected his predecessors—in extraordinary, unsparing terms—his staffing choices, alliances with facets of the hawkish right, and boisterous nullification of the Iran nuclear deal have left many to wonder: will Trump try to vanquish Tehran in battle?

Democrats in Congress’ upper chamber apparently think so. “Sixteen years after the U.S. invasion of Iraq, we are again barreling toward another unnecessary conflict in the Middle East based on faulty and misleading logic,” write Sens. Dick Durbin and Tom Udall, both Democrats. The Trump administration’s Iran policy is “built on the ashes of the failed Iraq policy.”

The brains behind the White House’s Iran policy include many of the champions of the 2003 preemptive invasion of Iraq: the Foundation for the Defense of Democracies (FDD), Frank Gaffney and Fred Fleitz’s Center for Security Policy (CSP) and the president’s national security advisor, John R. Bolton. Trump’s first national security advisor, Michael Flynn, co-wrote a book with Michael Ledeen shortly before the 2016 election; Ledeen, an old-school neoconservative, has consistently argued that the United States should have struck Iran first, not Iraq, in the fracas early last decade. A former senior administration official still in the loop tells me that war on the regime in Tehran is “very” possible.

Writing in the Washington Post, the senators assert: “The Trump administration has also been attempting to create a strong link between al-Qaeda and Iran—based on vague suggestions, but no hard evidence.” Indeed, an aide to a senior House member pointed me to a Washington Times op-ed page, long a repost of hawkish conservatives, that has been making the rounds. The February piece is quite friendly to John Bolton, the consummate lawyer, with its authors making the case that the allegedly substantial relationship between Iran and Al Qaeda could justify a strike under the 2001 Authorization for the Use of Military Force (AUMF), passed swiftly after the September 11 attacks. For realists, such insinuations are evidence enough of the continued need for a new AUMF. Bolton’s second act would perplex Fitzgerald and vindicate Faulkner: the past is never dead, it’s not even past. Yesterday, Bolton was on the Hill, holding court with the House GOP’s most powerful woman, rising star Rep. Liz Cheney.

“There is speculation that administration officials are considering striking Iranian territory or its proxies,” write Durbin and Uudall. The president’s attorney, Rudolph Giuliani, while making clear he did not speak for the White House on this issue, has told me the U.S. position is essentially regime change. Though the president has insisted he would meet with the Iranian leadership, on the North Korean model, it’s been crickets from Tehran. That suits seemingly everyone else in the administration, except maybe the president, just fine.

In this mille-feuille government, in addition to Bolton, Mike Pompeo’s State Department has been as fulsome an opponent of the Iranian regime as any entity—with officials taking to social media, sometimes bizarrely, to make their case. Len Khodorkovsky, a digital strategy official, is a proud, near-daily regime antagonist online. Pompeo himself, on Wednesday, took questions from the Iranian people in an online format. Said Pompeo: “The U.S. has great respect for the people of #Iran, and I believe it’s important for us to hear from them directly. So I asked the Iranian people to send me questions. I received more than 100,000 questions. Go to @USAdarFarsi to see my answers to many of them.” And Brian Hook, Foggy Bottom’s Iran point man, recently released a video of himself touring the abandoned, but kept-up Iranian facility on Washington’s Embassy Row. On the occasion of the Islamic Revolution’s fortieth anniversary, Hook, from the old embassy’s steps said: “The United States hopes the next forty years look radically different, as you, the people of the Iran, take your rightful place as a vibrant force for stability and prosperity in the Middle East and beyond.” Unlike the often-vacillating senior officials of John Kerry’s State Department, Hook’s pulling few punches. His stock is on the rise: according to the Emiratis, Hook was the only official to accompany Jared Kushner, the most powerful official in the White House, to a recent meeting with the UAE’s Crown Prince Mohammed Bin Zayed.

For many Iran hawks, the belief is that it’s 1989, not 2003. Iran is a hub of global counterculture—Islamic extremism—that will collapse on its own weight, a la the Soviets, if enough pressure is applied, so goes the view. This is the line of the controversial People's Mujahedin of Iran (MEK), and its Washington surrogate the National Council for the Resistance of Iran (NCRI), closely tied to Bolton, Giuliani and other Trump whisperers such as former House speaker Newt Gingrich. This approach may seem fantastic or foolish to some—is regime collapse likely, or even preferable for the stability of the region? What are the United States’ vital national interests?

This week, Durbin and Udall joined others in Congress who have tried to cull the war powers of an unpredictable president. “We plan to soon reintroduce draft legislation by a bipartisan group of senators that would restrict any funds from being spent on an unconstitutional attack against Iran,” the duo said. “Our Prevention of Unconstitutional War with Iran Act would rebuke Iran while affirming congressional war powers and preventing the president from dragging us into another needless conflict.”