The Zarif Resignation: What Happens Now? 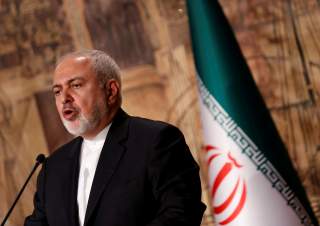 Yesterday I found out about the apparent resignation of longtime Iranian foreign minister Javad Zarif at the Washington offices of one of the Tehran government’s most strident foes: the National Council for the Resistance of Iran (NCRI).

The NCRI is the affiliate of resistance group MEK; National Security Advisor John Bolton and Donald Trump lawyer Rudolph Giuliani are friends of the organization. Ali Safavi of the group told me the departure represented a “terminal crisis” for the regime. Alireza Jafarzadeh, also of the organization, offered a dirge: “It’s a testimony that regime has failed.” For a group that has been licking its chops in the Trump era, Monday was another day of “tremendous headway.” It insists it wants nothing to do those who would militarily strike Iran; the regime, says the group, can implode on its own weight.

The word from Tehran, according to multiple local news reports, is that Zarif has quit after being cut out of a meeting with Syrian strongman Bashar al-Assad, a critical Iranian client; Assad had an audience in the capital with the Ayatollah, Ali Khamenei, and Iranian president Hassan Rouhani. Some Iran watchers looked askance at the unusual wording of the Zarif departure statement. States Zarif’s official Instagram: “I apologize for the incapability to continue my services and the shortcomings in my tenure as foreign minister.”

Further confusion was sowed Tuesday by an unofficial, but prominent account insisting that Rouhani had not accepted Zarif's resignation. That news has many doubters, who still think Zarif likely out. “Rouhani's official Instagram account that's verified [and] has over 2 million followers hasn't posted since Feb 18,” said Sina Toossi of the National Iranian American Council (NIAC), an organization in favor of the Iranian nuclear deal. “The account claiming Rouhani's rejected Zarif's resignation has ~200k followers [and] simply writes in a single, informal sentence that he's rejected. Doesn't seem legit.”

Washington is acting as if Zarif’s time is done. More so than Rouhani or the Supreme Leader, it was Zarif, American-educated and a commanding English speaker, who was the government’s face in the West. To the chagrin of Iran hawks, he was a fixture on many U.S. talk shows. Like the longtime Russian foreign minister Sergey Lavrov, Zarif notched a long stint as U.N. ambassador before becoming the dominant force in his country’s foreign ministry. “We note [Zarif’s] resignation,” said Secretary of State Mike Pompeo. “We’ll see if it sticks. Either way, he and [Rouhani] are just front men for a corrupt religious mafia. We know [the Ayatollah] makes all final decisions. Our policy is unchanged—the regime must behave like a normal country and respect its people.”

As the Trump administration plunges into Latin America and seeks to solidify a resolution to the crisis on the Korean peninsula, the apparent weakness of the government in Iran looks poised to thrust it back center stage. In an administration widely castigated for staffing shortcomings, there’s one thing it’s not short on: Iran hawks. Opposition to the regime, more than perhaps any issue (even North Korea), has formed the core of Trump foreign policy.

It’s worth noting that Zarif was also among the most hostile of Iranian officials to working on a new Iran deal with the United States. Trump’s administration might be all but officially committed to regime change, but the president has also, paradoxically, said he’s open to negotiations with Tehran, possibly more or less on the North Korean model. Zarif mocked this in comments to the National Interest editor Jacob Heilbrunn last year. “He actually would love to renegotiate with Iran?” Zarif said. “The fact of the matter is that we already have an agreement, so you don’t renegotiate an agreement that you reached with the government of a sovereign country. And we have reached an agreement, not only with the United States, but with six other countries.” For now, Zarif’s departure suggests a heightening of tensions. As Ryan Costello of the National Iranian American Council observes: “This is a clear signal of a hardening posture in Iran, which is exactly what proponents of confrontation in both the U.S. and Iran have hoped for.”