Twenty Years After 9/11, the West Is Far from Defeated 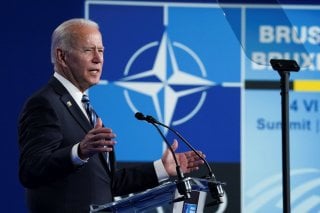 “In this tragic moment when words seem so inadequate to express the shock that we feel, the first thing that comes to mind is this: we are all Americans! We are all New Yorkers, as surely as John Kennedy declared, in 1963 Berlin, that he was a Berliner.”

Thus began the main editorial of Le Monde, France’s paper of record, on September 13, 2001, just two days after the attacks on the World Trade Center. Written by its editor-in-chief, Jean-Marie Colombani, this op-ed not only expressed the feeling of grief so many Europeans harbored for their overseas allies but also their solidarity, their identification with America in those terrible times. Just a few days later, for the first and so far only time, America’s NATO allies invoked Article V, according to which an attack against any member of the alliance is an attack against all. This paved the way for European countries to join the United States’ military efforts in Afghanistan.

Twenty years later, would such solidarity be expressed so spontaneously and so openly by any leading European newspaper? There are reasons to be doubtful. True, European and American soldiers continue to fight together against jihadism. NATO was engaged in Afghanistan from the start. A “coalition of the willing” including Britain and many other European allies, went into Iraq in 2003. And although in Mali it is French and European forces that fight jihadist groups on the ground, they do so with U.S. intelligence and technical support. In Syria and other theaters of operations, Europeans and Americans stand side by side, suffering their losses and achieving their victories together.

The mood on the home front, though, is not especially victorious. Except as a slur or a complaint about its moral decadence, the West is seldom mentioned in political discourse on both sides of the Atlantic. We have forgotten the spirit of solidarity that allowed John F. Kennedy to pronounce himself a Berliner or Jean-Marie Colombani to identify fully with New Yorkers and with the whole of America in the aftermath of 9/11. Much like trust, solidarity needs to be constantly cultivated. The West has not shown much of either over the past few years, even though enemies from Beijing to Moscow to Afghanistan are quick to identify it as a single unit.

The Afghanistan debacle has been widely interpreted as another setback for the once-mighty Occident. Westerners had come to Afghanistan to fight a foe that, by attacking the United States, had attacked the transatlantic alliance. Once that mission was accomplished, they stayed to stabilize the country and to build a modern state, something that Afghans themselves had not done for hundreds of years. Many have labeled this the epitome of Western hubris: trying to remodel the world in one’s own image. What nobody in Washington or Brussels dared to say out loud was that to be successful, such a titanic effort required decades, not years. It required many surges, very few pullbacks, and a constant investment in military effort, in cultivating local elites, and in economic development in a region—Central Asia—that never was a strategic priority for the United States. Without agreement about long-term objectives and without a clear rationale for why we needed to stay in Afghanistan, the patience of the American public for the project was always going to thin out. The expenditure of blood and treasure, the claims about institutions that ended up being castles made of sand, and fatigue on the home front did the rest. The images of the past few weeks will complicate the West’s capacity to exert its influence in the world.

Western self-esteem has undoubtedly taken a hit in Afghanistan and so has Western solidarity. If military over-extension demanded a reconsideration of engagements, the ensuing pull-outs have been poorly managed. Europeans have made clear that they resented the way in which the United States left Afghanistan, without consultation and, more painfully, without recognizing the sacrifices and travails Europeans shared with Americans. The list is non-exhaustive, but the UK lost 456 soldiers in Afghanistan, France eighty-eight, Germany sixty-two, Italy fifty-three, Poland forty-four, Spain thirty-five—not so much compared to U.S. losses perhaps, but significant nonetheless following an attack that had not taken place on European soil. To be fair, Washington could make the case that it was not much consulted either when its allies pulled out. Spain exited from Iraq in 2004 after general elections affected by the terrorist attacks on Atocha train station. France withdrew from Afghanistan after the electoral victory of Francois Hollande in 2012, and the United States could hold legitimate grievances for the many operational exemptions European allies requested and obtained for their engagement in Afghan combat zones, which disrupted operational capabilities in the heat of action.

These transatlantic dissonances, plus others, have reinforced an impression of Western vanity, futility, and weakness. The West’s rivals have used all these incidents to argue that it is in a state of terminal decadence and that it will soon be a thing of the past. Beijing has portrayed the exit from Afghanistan as the last nail on the coffin of American and Western power: the lack of coordination among allies, the rush to leave, the chaos of departure, the fecklessness. For a long time to come, the images of the C-130 and Chinook helicopters hurriedly leaving Kabul airport will be used by state and non-state enemies of the West to further their narratives and their propaganda.

The relative estrangement among allies does not help matters. The Western solidarity that flowed from September 11 has certainly dissipated. Mutual irritations are regularly expressed on both sides, adding to the many structural problems with the transatlantic relationship. U.S. coronavirus-related travel restrictions on Europeans and newly imposed European travel restrictions on U.S. citizens are signs of a mutual inability to cooperate. Over the years, American and European heads of state and governments have not shied away from complaining. Defense Secretary Donald Rumsfeld spoke disparagingly of “old Europe.” President Barack Obama worried about European free riding. President Donald Trump described the EU as “worse than China” on trade. German chancellor Angela Merkel publicly doubted the reliability of the United States. French president Emmanuel Macron’s reference to NATO in late 2019 as “brain dead” is one of many examples of self-diagnosed dysfunction.

This is one side of the coin. Yet arguments about chronic Western decline, especially those based on recent footage from Kabul, are short-sighted and partial. Taliban victory in Afghanistan is a spectacular, media-saturated setback for the West. But it is not (or at least not yet) a sign of terminal decline. Afghanistan was never crucial to U.S. foreign policy in the way that Central Europe was to the Soviet Union during the Cold War. Without understating the humiliation of the past few weeks, it bears emphasis that singular events can be over-interpreted—or hyperbolically interpreted. Despite the optics, the West remains strong. Amid the introspection and debate, themselves typical features of Western political discourse, what continues to make the West healthy and formidable should be kept in view.

The first of its strengths is the awesome defensive power of the Western military alliance, and particularly NATO. The fact that nobody has dared to challenge it since its creation in the late 1940s makes it a quiet but pivotal success. Europe’s state of nature is war, illustrating the Pax Americana that has reigned inside NATO for almost seventy-five years as a remarkable accomplishment in itself. In the war on terror, Western powers have been able to react not only to the terrorist threat but to the changing tactics of jihadists in targeting European or American targets. This has not impeded all attacks, such as in Madrid in 2004, London in 2005, or Paris in 2015-2016; but none of them reached the scale and intensity of 9/11. A remarkable feature of the war on terror, despite having started on American soil, is that it mostly played out in foreign theaters, and not in the West. In a confrontation, this is not a sign of weakness.

As foreign and security policy shifts from terrorism—which remains a real threat—to more classical state-to-state power politics, the Western alliance remains a dynamic, near impregnable force. Despite numerous provocations and invasions at NATO’s doorstep, Russia has never dared to confront NATO militarily, demonstrating the military resilience of the alliance and its continued relevance. In the Baltic Republics and around Central Europe, the West’s power is hardly symbolic or rhetorical. The choice to move away from Eurasian domination to the West in the 1990s was made with the understanding that adhesion to NATO was pivotal. Countries like Ukraine have come to know very well the costs of aspiring to join the West but not belonging to its security framework.

Even if NATO characterizes itself as a defensive alliance, it would be a mistake for the West to define its security in purely defensive terms. A key element of the West, NATO is not the whole of the West, and Western allies have capacities to go beyond the protection of Europe. Thanks to its naval capacities, the West can project power around the oceans. This includes European powers like France and the UK, who have supported efforts to guarantee continued security and freedom of navigation in the Pacific and the South China Sea, along with their American allies. The West is also very much present in the Pacific with Australia and New Zealand, two pillars of the West—not least operationally through the Five Eyes. Countries that may not have belonged to the “cultural” West of the 1940s or earlier—Japan, South Korea and India—have come to embrace at least some of its values or have a vested interest in cultivating defense and political ties with the West.