Ukraine and the Danger of Human Miscalculation 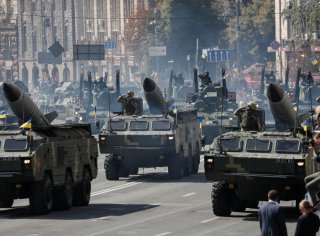 Russian President Vladimir Putin’s threat to invade Ukraine and President Joe Biden’s threat to sanction Russia in response cast into high relief the danger of human miscalculation in causing a war neither side wants. Each side may miscalculate what the other may do, and each other’s options are asymmetrical to the other’s. That Putin has leaned so far forward makes it hard for him to back down without anything to show for his saber-rattling.

Don’t expect an invasion to end with Western sanctions. Thus, a key issue isn’t whether the West can deter an invasion. It’s what happens after that. Western economic sanctions would likely prompt an asymmetrical response. Open-source reporting has suggested that Russia may have already infiltrated elements of the U.S. power grid. Its malware may also be able to damage critical infrastructure and access to the Internet on which our lives depend. The West is vulnerable to cyberattacks from Russia—a long-term challenge that must be vigorously addressed. Deploying cyber malware can trigger rapid, catastrophic escalation that severely damages all parties. We need to think several steps ahead. We must guard against the danger of human miscalculation in anticipating how each side may react to action by the other.

Putin claims Ukraine is part of Russia. He ignores the 1994 Budapest agreement that guaranteed Ukrainian independence. But we’re dealing with how Putin’s perceptions affect his strategy, not their reasonableness. The subtext may be his desire, as he nears age seventy, to establish a lasting legacy. Having pronounced the collapse of the Soviet Union a tragedy, he views his legacy as reviving the Soviet empire’s influence—Making Russia Great Again. Even though he withdrew his troops, his actions in Kazakhstan also suggest that.

Putin is smart and resourceful. But critics argue that he is also paranoid and emotional. Thucydides wrote that nations go to war out of fear, interest, or pride. Pride includes nationalism, a virulent, strong current in Russian politics. Emotion as much as reason may influence his actions.

It feels like Putin is primed to act over the next four to six weeks. Putin would likely avoid overrunning all of Ukraine in favor of seizing eastern Ukraine and then using intimidation against the western half to influence its politics. Occupying all of Ukraine would prove financially costly and invite nightmarish irregular warfare. He cannot afford a morass that sends lots of body bags home.

The United States needs a grand strategy for dealing with Russia that examines what kind of relationship is possible with Russia. Let’s not deal with Ukraine piecemeal. What are the broader consequences of action over Ukraine? How would the United States deal with rapid escalation? How much military support other than sending troops is prudent? Would a Western response drive Russia into a closer alliance with China? Is it possible to find common ground? Where are the irrational pitfalls?

U.S. strategy must be tough but smart. It must deter Russia from riding roughshod over Ukraine’s independence. It also needs to consider Russia’s perceived vital interests and address that in ways that don’t harm U.S. interests or Ukraine’s. One plausible outcome is for Ukraine to accept a status akin to Austria, which maintains freedom and independence but aligns with neither the United States nor Russia. Any strategy must persuade Russia to resist aligning with China. Russia may not be a U.S. friend, but its security interests strongly align with the U.S. goal of preventing China from achieving its 2049 dream of global military and economic supremacy, ending the international rules-based order, and rendering other nations its economic tributaries. That outcome would serve neither U.S. nor Russian interests.

How should all this be accomplished? Ideally, the Biden administration would be well advised to initiate a new Solarium project, such as the one that President Dwight Eisenhower initiated in 1953 to forge a grand strategy for defeating communism. It produced the successful strategy of containment. No succeeding administration has embarked on a similar process. It’s overdue, lends itself to the studied approach the administration seems to prefer, and could do much to avoid armed conflict over Ukraine while mutually advancing the security interests of all the parties involved.

James P. Farwell has advised U.S. Special Operations and the Department of Defense. An Associate Fellow in the Dept. of War Studies, King’s College, University of London, he is the author of Information Warfare (Quantico: Marine Corps U. Press, 2020) and The Corporate Warrior (Brookfield: Rothstein Publishing, 2022). The opinions expressed are their own and not those of the U.S. Government, its agencies, departments or COCOM.