The U.S. and EU Need to Get Serious About Transatlantic Tech 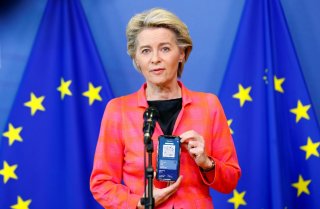 Wheels are up on President Joe Biden’s first international trip. As Biden jets back from his flurry of Summits with the G7 Summit, NATO, the European Union (EU), and finally with Russian president Vladimir Putin, his message was clear: America is back and intent on rebuilding its alliances.

The successful summit tour was a welcome signal in transatlantic affairs, especially for the European Union, whose relationship with the United States suffered under the Trump administration. Yet these positive trends should not distract from the very real challenges that will define the U.S.-EU relationship in the digital arena.

Following Biden’s meeting with European Commission President Ursula von der Leyen and Council President Charles Michel in Brussels, they made all the right signals about a restored U.S.-EU relationship. Both sides recommitted to resolving steel tariffs and broke ground on subsidies for aircraft manufacturers.

The other agreements notwithstanding, one announcement stands out as a notable and a positive sign—Biden and the EU leadership launched a Trade and Technology Council (TTC) as a forum for high-level coordination on a wide range of digital issues, including artificial intelligence, cybersecurity, innovation and research, and transatlantic standards for emerging technologies.

First proposed by the European Commission, the TTC intends to boost cooperation between two major digital markets. But another impetus for the launch of the TTC is Beijing. In recent years, U.S. and EU decisionmakers have gradually converged in their growing concerns about China’s efforts at technology and supply chain dominance across vital European economic sectors. China’s use of advanced surveillance technology to control its own people and the West’s reliance on Chinese-made critical medical supplies during the coronavirus pandemic have heightened these concerns. As strategic discourse in the United States and Europe has shifted back towards the traditional focus on great-power competition, an array of detailed digital policy questions—from artificial-intelligence regulation and data flows to global standard-setting—have increasingly come to the fore.

Enter the TTC as part of a strategic transatlantic response toward China. As Biden’s national security advisor Jake Sullivan put it, the transatlantic allies should make sure “democracies and not anyone else, not China or other autocracies are writing the rules for trade and technology for the twenty-first century.” A focus on China and emerging technologies with yet-to-evolve regulatory frameworks certainly can bring new energy, new players, and a new sense of mission to the transatlantic table.

But while the TTC can become a useful vehicle for greater policy coordination among the United States and its European allies vis-à-vis autocratic challengers, transatlantic leaders cannot afford to view the TTC and its agenda solely through the China lens. It must also serve as a forum for lending political energy to resolving some of the most divisive and intractable transatlantic disagreements of the past decade—from privacy rules and data transfers to big tech regulation and digital taxation. Unless the United States and the European Union find a way to address these differences between them, their attempt at solidarity in countering autocratic challengers at a global level will fall short, and others will emerge as leaders of a global digital economy.

What’s on the Digital Agenda?

The TTC agenda will focus first on some of the issues where the United States and EU are already most in alignment: the need for cybersecurity standards, as well as on artificial intelligence and other emerging technologies; the importance of resilient digital infrastructures; support for research and innovation; and need to ensure that new technologies reinforce and strengthen our democracies, rather than erode them.

But another task of the TTC—”to facilitate regulatory policy and enforcement cooperation and, where possible, convergence” of tech policy—will frustrate transatlantic cooperation on those areas if to date unresolved issues are not addressed. In particular, any credible U.S.-EU push to create joint positions that will bring global influence will have to show progress on issues spanning data transfers, competition policy, and global taxation standards.

Distrust and uncertainty have plagued transatlantic data transfers for years, fueled by European perceptions of rampant U.S. foreign surveillance and a lax US privacy regulatory environment, as well as the acknowledged dominance of American cloud services giants. U.S. and EU negotiators have been struggling for months to patch the Privacy Shield Framework, a major commercial data transfer arrangement shredded by the Court of Justice of the European Union last summer. The affirmation coming out of the summit to complete negotiations may help generate needed momentum, though difficult challenges still lie ahead for the United States in deciding how to reform national security surveillance law to accommodate European privacy sensibilities.

There is growing concern on both sides of the Atlantic Ocean about the dominant market position of a few large U.S. firms. After many years of quietude, the Federal Trade Commission has launched antitrust investigations into several major tech companies. Congress is also restive, although it is not clear that any of the bills aimed at so-called “big tech” will actually pass. But it is in Europe where competition authorities have aggressively sought to constrain allegedly market-dominating behavior, first through competition investigations and fines, and more recently through the proposed Digital Markets Act (DMA). The DMA seeks to prevent market dominance by forbidding “gatekeeper” companies from undertaking certain actions. If the DMA becomes law, then it is widely expected that most, if not all, of the gatekeepers subject to these restrictions will be U.S. companies. The United States and EU urgently need to develop a much more harmonized approach to competition in the digital arena, one that preserves and encourages innovation while ensuring market contestability.

In recent years, a number of EU countries have adopted digital services taxes, aimed at capturing revenue from companies that sell digital goods and services to their citizens but that do not have a physical presence (and thus tax base) in their country. The United States has responded by concluding that these taxes are discriminatory towards U.S. companies and has identified (and suspended) tariffs on U.S. imports from European countries with digital services taxes. The Biden administration has recently engaged with the Organisation for Economic Co-operation and Development effort to tackle such taxation by developing an international consensus. Although the EU has been supportive of that effort, removing the existing digital services taxes will be challenging. Moreover, the European Commission is expected to propose its own digital services tax later this year.

Getting Down to Business

The emergence of the TTC is a welcome political sign, showing that the United States and the EU are prepared to get serious about greater coordination on digital issues. However, political signals about the importance of multilateralism are only the first step. Real progress in transatlantic digital policy will require focus and commitment to tackle hard problems. A serious commitment to the exercise—and a willingness to tackle data transfers, competition policy, and digital taxes, along with other crucial issues—could yield significant results, allowing the U.S.-EU partnership to become truly the leaders of the global digital economy.