Vision 2035: Global Response in the Age of Precision Munitions 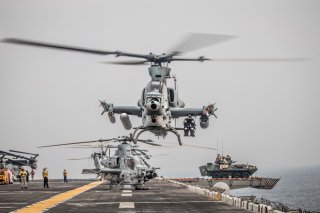 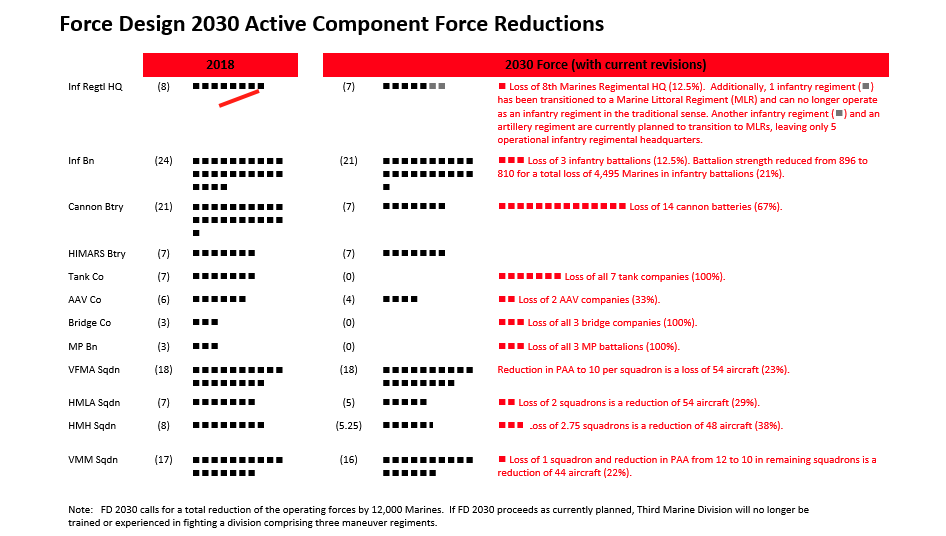 The multiple years’ gap between the divestiture of currently needed force structure, equipment, and logistics and the arrival of new capabilities with proven effectiveness and in sufficient quantity poses a substantial risk to national security. These cuts were unwisely made to self-fund unproven capabilities in the future. Although some of the future innovations may prove useful, the unnecessary cuts will adversely affect the Marine Corps’ ability to respond quickly and effectively to global crises and contingencies and come dangerously close to contravening U.S. law and Congress’ intent.

Title X, U.S. Code states in part: “The Marine Corps … shall be so organized as to include not less than three combat divisions and three air wings. … The Marine Corps shall be organized, trained, and equipped to provide fleet marine forces of combined arms … and shall perform such other duties as the President may direct…” The Marine Corps is in the process of undercutting what, over time, have become Title X expectations.

If the reorganization of forces in the Pacific proceeds as currently planned, the Third Marine Division will cease to be a “combat division” as envisioned under Title X. The Marine Corps will be left with two “combat divisions” and a two-star administrative headquarters unable to maneuver combat formations in the traditional sense.

The cuts in infantry regiments and battalions, divestiture of tanks, and significant cuts in cannon artillery and aviation seriously degrade the effective application of combined arms in the close and rear battles, where winners and losers are ultimately decided. Simply stated, Marine infantry and combined arms are no longer the central components of Marine Corps Operations.

The capability of the Marine Corps to “perform other duties as the President may direct” will be significantly constrained by insufficient amphibious shipping, inadequate maritime prepositioning, and too few appropriately sized combined arms teams built around Marine infantry.

The will of the 82nd Congress, as expressed in 1956, stated in part that “the nation’s shock troops [Marine Corps] must be the most ready when the nation is generally least ready… to provide a balanced force in readiness… to suppress or contain certain international disturbances short of large-war.” The divesture of combat formations and capabilities, coupled with the myopic focus on sinking the Chinese Navy’s warships in the Southeast Pacific, is rapidly transforming the Marine Corps into a regional force narrowly focused on a single threat. The Marine Corps is increasingly unable to respond to global crises and contingencies across the spectrum of conflict.

The Marine Corps is on the wrong path. The path currently charted is clearly at odds with congressional mandates and intent. The Marine Corps is less capable today of responding to global crises and contingencies than three years ago. Restoring needed capabilities that have been unwisely discarded and pursuing new innovations, some of which are currently under development, will make the Marine Corps more ready to answer the Nation’s 9-1-1 call. By restoring Marine infantry and combined arms as the central components of Marine Corps operations, Marine forces will remain the ultimate arbiter in the close and rear battles.

The mostly unstated premise of Force Design 2030 is that advancements in sensors and precision munitions have changed the character of warfare, fundamentally tipping the balance between the offense and the defense to the latter. Proponents of this theory argue that technological advances have rendered maneuver all but impossible. According to them, anything that moves can be detected, targeted, and destroyed. To accept this conclusion is to acknowledge that the Marine Corps can no longer respond quickly and effectively to global crises and contingencies across the spectrum of conflict. We reject this conclusion.

While these arguments may have limited merit, they fail to appreciate the lessons of history, specifically that for every new capability fielded, a counter capability is nearly always developed, rendering the original development obsolete or manageable. History is replete with examples where military planners mistakenly believed technological advances had rendered offensive operations outdated or impossible.

As an example, the French concluded from their devastating losses in World War I that the offense was no longer a viable method of waging war. The manifestation of their ill-conceived beliefs was the Maginot Line. On the other hand, the Germans leveraged innovation and technology to develop the Blitzkrieg, which simply bypassed the French’s monument to failed thinking in a matter of days.

The daunting task of prevailing in a Mature Precision Strike Regime (MSPR) is no more challenging than developing the amphibious capabilities that most military experts and planners thought impossible 106 years ago. History has shown that innovation and technology, if properly pursued, can significantly mitigate or overcome any military problem.

The United States will continue to face a diversity of threats from state and non-state actors. Potential adversaries will threaten our national security interests, our economic prosperity, and our freedoms. The future security environment will be characterized by increasing great power competition and the rise of peer and near-peer competitors. Though China and Russia will probably remain the most dangerous threats, they are not the most likely threats. We cannot ignore regional competitors such as North Korea and Iran. We will need to guard against the unique challenges they present and not simply look at them as “lesser and included” threats.

Failed and failing states, violent extremist organizations, and competition for resources will also present unique challenges to the international order that will require a coalition of military forces to establish security and stability among competing factions.

Much of this uncertain future will remain unknown until events begin to unfold on the world stage. Two certainties are known and enduring.

First, the United States will remain a maritime nation with global interests. Freedom of the seas for global trade will be as important in the future as it has been in the past. The Pacific theater will increase in importance due to growing economies in the countries that border the Pacific Ocean and the amount of trade that transits its waters.

Second, the nature of war will not change. It will remain a chaotic, brutal, bloody, and inhumane endeavor.

We recognize that the character and face of war may change in response to innovation and new technologies. The Marine Corps has always adapted to changes in the security environment. The twentieth century presented its own distinct set of security challenges, as have the first two decades of the twenty-first century. The proliferation of long-range precision weapons and sensors and recent advances in other guided munitions and unmanned systems present their own set of unique and seemingly implacable problems. Nevertheless, as we have noted previously, for every advance in technology, a counter capability can and will be developed, rendering the advance either ineffective or obsolete. To meet the challenges of the twenty-first century, we will pursue innovation and technological advancements that will provide U.S. Marines with the capabilities required to fight and win.

A Vision for Global Response in the Age of Precision Munitions

We propose an innovative alternative approach to meet future challenges, one that will retain the strengths of the Marine Air Ground Task Force (MAGTF). We will leverage innovation and technology to ensure the Marine Corps remains the Nation’s 9-1-1 force and retains the capabilities necessary to fight and win across the spectrum of conflict, anywhere in the world. It is not narrowly focused on the confines of the Western Pacific. Our approach is different than Force Design 2030. It is a concepts-based approach to requirements determination to meet uncertain contingencies, not a threat-based approach focused on the certainty of identifying a single potential adversary.

While recognizing the overriding importance of the Pacific region and the fact that China will continue to challenge U.S. security interests in the region and elsewhere, our vision is to restore the ability to maneuver, regain the initiative, and respond quickly and decisively to threats anywhere in the world.

Ours is not a look backward. It is a forward-looking approach that recognizes and appreciates the multiple and diverse security threats facing our Nation in the twenty-first century, an approach that leverages innovation and technology to ensure that U.S. Marines remain capable of global response. Our vision is built on the following pillars: