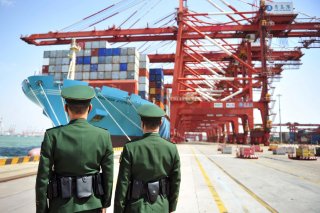 Thirty years after the demise of the Soviet Union and the end of the Cold War, the world finds itself in a new cold war. Abandoning “hide and bide,” the Chinese Communist Party pursues its dreams of a leadership role in a world safe for authoritarianism, seeking to reverse the judgment of the failure of Leninist authoritarianism in 1991. This vision for the future is in conflict with that of the United States and the Free World. “Socialism with Chinese Characteristics” has finally been acknowledged as a brutal dictatorship at home and an aggressive presence abroad. Beijing has used military power to bully its neighbors and economic power to punish those who resist its agenda, all the while leveraging access to Western technology to advance its repressive vision of domestic and global governance.

During the previous Cold War, the United States and the Free World felt the threat most intensely in the military sphere and in Western Europe.  Had the Soviet Union succeeded in dominating all of Europe, it would have profoundly altered the global balance of power in its favor.  The United States responded by establishing and leading NATO—rightly called the most successful military alliance in history because it won without having to fight.

This cold war is different. Beijing presents a military threat in Asia and an economic and technological threat globally. Given the breadth of the challenge, a single multilateral military alliance is not the answer. Responding to Beijing’s broad-spectrum aggression will require a web of alliances of varying shapes, sizes, and formality, each arrayed against one or more aspects of the threat. The mutual obligations of the members would be diverse as well: they will run the gamut from NATO’s formal mutual defense obligations to general agreements on economic standards to commitments to prevent the transfer of critical technologies. Speed and flexibility are essential: grass-roots and ad hoc groupings pit the strengths of shared interests and common world views against rigid centrally planned aggression.

The objective of the United States and the Free World in this cold war is the same as in the previous one: preserve freedom, peace, and prosperity by arraying such a powerful coalition that our adversary will never be tempted to test their strength. Collective action through Alliance Networks is key: Beijing fears international isolation.

The 2017 National Security Strategy declared that “Economic security is national security.” China, the world’s second-largest economy, uses its economic power to bend others to its authoritarian will. The Free World needs an economic collective security mechanism to resist Beijing’s predations. NATO’s Article V states that a military attack on one is an attack on all and that member nations commit to support each other. The World Trade Organization did not anticipate an illiberal economic giant, so the world needs an economic Article V in a different context.

Some of the work of the Inter-Parliamentary Alliance on China is a first step in this direction. IPAC was launched last June and has as members over one hundred legislators from twenty countries. One of IPAC’s objectives is trade fairness. When Australia asked the World Health Organization to investigate the origins of the coronavirus pandemic, China imposed harsh tariffs on Australian wine, barley, and beef, and restricted tourism to Australia. Canadian parliamentarian and IPAC co-chair Garnett Genuis said, “We don’t want to be in a situation where individual countries are targeted and isolated one at a time.” IPAC organized a November 2020 campaign to encourage people to each buy two bottles of Aussie wine. The economic impact was modest, but the message of the Free World acting in concert was powerful. Underlying Beijing’s complaints of “Cold War thinking” is its fear that democracies would join together to oppose its actions.

The United States must lead in the creation of technology coordination mechanisms both for technology defense and to promote collective technology advancement. There are several promising initiatives along these lines of which two stand out.

One is a 2020 joint proposal from three think tanks on three continents: The Center for a New American Security in the United States, the Mercator Institute for China Studies in Germany, and the Asia Pacific Initiative in Japan. It is called “Common Code: An Alliance Framework for Democratic Technology Policy” and it argues that “technological leadership by the world’s major liberal-democratic nations will be essential to safeguarding democratic institutions, norms, and values, and will contribute to global peace and prosperity.”

Their proposed technology alliance would start with about a dozen democracies. It seeks to secure and diversify supply chains, protect critical technologies, and reclaim the integrity of international standards-setting. It will also pool resources to create a multinational investment mechanism for digital infrastructure and increased research and development.  Importantly, it would counter disinformation and other illiberal uses of technology as well.

Another 2020 proposal came from the China Strategy Group, a small consultative body led by former Google CEO Eric Schmidt, in a report entitled “Asymmetric Competition: A Strategy for China and Technology.” The asymmetry comes from China playing “by a different set of rules that allow it to benefit from corporate espionage, illiberal surveillance, and a blurry line between its public and private sector."  The report notes that there is currently no global mechanism for technological coordination among democracies and calls for American leadership to create one. It proposes the creation of T12, “a new plurilateral coalition of techno-democracies” to promote and protect common norms and values, and of an International Technology Finance Corporation, a jointly funded Free World development finance institution. It also advocates collective action in global standard-setting and in establishing technological trust zones.

Broad-spectrum pressure from Beijing is pervasive in the Indo-Pacific region and the need for a coordinated regional response is urgent. Beijing’s increasingly nationalistic rhetoric (“we will not cede one square inch of territory bequeathed to us by our ancestors”) has led to territorial friction with its Southeast Asian neighbors. As the stakes and the risks rise, collective responses are needed that will consider in-kind, as well as asymmetric responses.

The Quad is a good model of how shared interests can bring countries together while their diverse perspectives enable collective action. One needs to look no further than the joint India-Vietnam naval activities in the South China Sea or the India-Japan East-West Economic Corridor initiative to understand the benefits of informal, flexible alliance cooperation.

The previous cold war’s alliance paradigm put the United States in the center of regional hub and spoke alliance configurations. This unnecessarily limits and slows collective action since the focus is on Washington, whose reactions are often slow. The Quad has shown the benefits of a loosely networked alliance by maximizing the contributions of each partner, increasing buy-in, and minimizing freeloading. An added benefit of a vibrant Quad alliance is that it can serve as a point of entry for support from Europe and elsewhere.

Europe has not approached the China Challenge with the same urgency as the United States or its Indo-Pacific partners because Beijing is not a direct military risk. Furthermore, Europe has extensive economic dealings with China and would prefer to avoid economic damage from political friction.

But European enthusiasm for doing business in China is waning. The European Union Chamber of Commerce in China reported in its July 2020 Confidence Survey that despite Beijing’s repeated promises to “reform and open its markets,” nearly half of its members faced market access barriers, a more difficult business environment than the year before, and Chinese government preference for State-Owned Enterprises over private companies.

And European public opinion is deeply disturbed by the genocide in Xinjiang and the July 2020 National Security Law, with Beijing cynically walking away from formal international commitments to Hong Kong autonomy. Also, Beijing’s attempts to leverage the coronavirus pandemic for economic and reputational benefit awoke many in Europe to the true nature of the CCP.  Europe knows from its history that governments that commit human rights crimes at home are also capable of  provoking conflicts abroad.

In response, a 2019 EU strategic document recognized China as a “strategic rival.”  European countries, following the lead of the United States, are creating mechanisms to prevent Chinese acquisitions of companies in national-security-sensitive sectors.  Also, several European countries signed up to the State Departments’ “Clean Networks” initiative, excluding Huawei equipment from their telecommunication networks.

Individual European countries are also stepping up militarily.  The UK, France, and Germany have sent naval forces to the South China Sea to reinforce rule of law and have committed to more presence operations in 2021. An important next step would be for NATO as an institution to increase its Indo-Pacific cooperation with the Quad.