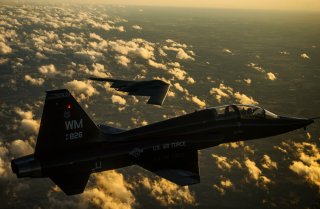 Following two decades of counterterrorism and nation-building in Iraq and Afghanistan, there is understandably considerable debate in the United States about the needs of U.S. security. How big should the defense budget be? What nuclear deterrent strategy should the United States adopt? A security and nuclear posture review will examine both issues this year. Part of that effort is built on the hope that America has learned “lessons” from the Global War on Terrorism and redirect the means which we use to protect our country to more achievable objectives.

That 2010 deal appears to be holding. The House of Representatives recently voted 299-118 to focus on the modernization of the U.S. nuclear triad’s intercontinental ballistic missiles (ICBM) and by 286-142 to add $23.9 billion to the defense budget.

To maintain public support for such a deal, the government will have to find a way forward that avoids endless wars, reduces the number of U.S. troops overseas, and prompts U.S. allies to do more for mutual security. At the same time, the government must maintain a strong defense, keep a watchful eye on North Korea, China, Russia, and Iran, and promote strategic stability without using nuclear weapons.

The solution to this sprawling problem is in strong integrated deterrent, including nuclear deterrence. For seventy years, a strong U.S. nuclear force has prevented the use of any nuclear warhead against the United States and its allies. Historically, conventional deterrence has not always held. Cross-border wars in Korea, Kuwait, Afghanistan, and Vietnam were not avoided. Combined, North Korea’s decision to invade South Korea, the North Vietnamese subversion, guerrilla war, and invasion of the  Republic of Vietnam killed nearly 100,000 American soldiers along with six million other allied soldiers and civilians.

A new Rand report shows that from 1946–2018, eleven communist states—all client states of the former Soviet Union and state sponsors of terrorism—led virtually every conflict or war against the United States and its allies including guerilla wars, terrorism, and subversion. These major military interventions grew from fifteen in 1970 to nearly forty annually by 1980. They markedly declined during the administrations of Ronald Reagan and George W. Bush and reached thirteen by 1992. Adversary troop involvement also dropping precipitously from 1.7 million annually from 1985–87 to under one hundred thousand by 1992.

However, ironically, to accomplish this decline in enemy aggression, the American use of force from 1981–91, from the height of the Cold War to the end of the Soviet empire, was markedly restrained. Albeit, Grenada was liberated, Libya was bombed, and U.S. “peacekeeping forces” were sent to Lebanon.

But critically important, U.S. conventional and nuclear deterrent forces were markedly strengthened under a strategy of “peace through strength.” This strategy emphasized an across-the-board use of American diplomatic, economic, political, and military power but the restrained use of military power.

The Reagan administration strategy of exhausting the Soviet exchequer utilized an across-the-board array of American power. The strategy worked: the Soviet empire cost Moscow by the late 1980s some eight times its 1980 foreign exchange earnings, creating sharp divisions within the Soviet economy. This eventually led to the collapse of the Warsaw Pact and with it the end of the USSR empire.

Thus, strengthened deterrence does not require the unconstrained use of U.S. military forces abroad. President John Adams famously said, “Americans should not go abroad to slay dragons they do not understand.” Deterrence seeks to avoid war—to win the peace—without having to fight dragons. However, strengthening deterrence is not free. It will require great effort because the forces now arrayed against the United States and its allies are formidable. In particular, the extent and breadth of the nuclear forces of China and Russia are formidable.

This warrants the support of a deterrent effort that gives a green light to modernizing our nuclear deterrent and fully supports curbing the aggressive tactics of Russia, China, North Korea, and Iran.

Deterrence is made up of a number of key factors. First, it requires a credible military force. Second, it requires a demonstrated will to build such a force in the defense of U.S. security. Third, it requires improving all of America’s power, including its economic and political strength. And lastly, it must achieve strategic stability.

There is a credible force plan on the table. Congressional representatives of the American people support going forward with the plan. U.S. military planners are beginning to speak intelligently about integrating all the centers of U.S. power.

The Case for Strategic Stability

Franklin Miller, formerly a special assistant to Bush, explained to the Task Force-21 Minot Nuclear Triad Symposium on September 24 that enhancing strategic stability means exploring a new round of arms talks with the Russians—which the United States is now doing. However, he cautioned that Russia poses a looming threat to regional and global stability—particularly from its short-range nuclear forces to U.S. allies in Europe. These Russian forces now being fully modernized are “intended to intimidate our allies in peacetime and threaten the escalation to the nuclear level of any conflict” arising from a Russian land-grab of NATO territory.

Whatever a new arms deal with Russia might yield, it is wholly insufficient to secure deterrence which can only come from building a credible strategic nuclear deterrent on new strategic bombers, land-based missiles, and submarines. Such building will also require a low-level Trident W76-2 warhead, adding fifth-generation dual-capable aircraft to U.S. and allied forces in Europe, upgrading the B-61 warheads, as well as enhancing U.S. and allied missile defenses and conventional long-range strike options.

Miller said that it’s critical to understand that Russia and China are not building up their nuclear forces by accident or due to industrial inertia. President Vladimir Putin announced Russia’s attempt to build up its nuclear force in 2008, initiated it in 2014, and is now nearly complete.

While China has never announced the details of its nuclear modernization, satellite photos have recently revealed the construction of at least 350 new ICBM silos, each of which can contain the Chinese Dongfeng-41 ICBMs carrying ten warheads.

What is the extent of the Russia and Chinse build? The Russians are only partially limited in their modernization by the New Start treaty. Even so, their 520 strategic nuclear delivery vehicles could be expanded to seven hundred as long as the associated warheads were limited to 1490, not including whatever warheads and gravity bombs can be included in sixty bombers.

China is under no treaty limits for all of its nuclear forces. Meanwhile, 55 percent of Russia’s nuclear forces—particularly shorter range and exotic new strategic forces—are not curtailed by the 2010 New START.

A U.S. deterrent capable of holding at bay the aggression objectives of Russia and China has to be both conventional and nuclear. Miller warns that all scenarios where the U.S. conventional might prevail in a conflict with Russia or China assume that no use of nuclear weapons is introduced into the fight. Otherwise, all conventional assumptions go out the window. As former Arizona Senator Jon Kyl warned some years ago, after having served on the 2018 national security commission studying U.S. security choices, he had never previously served on such a commission where the results of wargaming and multiple scenarios had the United States losing a future fight to our enemies.

This reality requires the United States to enhance its conventional and nuclear capabilities.

Remember that in 2010 when the New START Treaty was signed, the United States assumed that there could be a “reset” with Russia. Although Moscow might be an adversary the country was not necessarily an enemy. On top of that, China was assumed to have a low level of nuclear weapons. America assumed that whatever deterrent it deemed sufficient to deal with Russia was deemed sufficient to deter China too.

Miller noted that the key question for the United States is “given the aggressive policies of Putin and Xi [Jinping], their adventurism, their military building programs, and their nuclear forces expansion, how can an overall U.S. force limited to 1550 [warheads] meet our deterrence and extended deterrence requirements for the present and foreseeable future?”